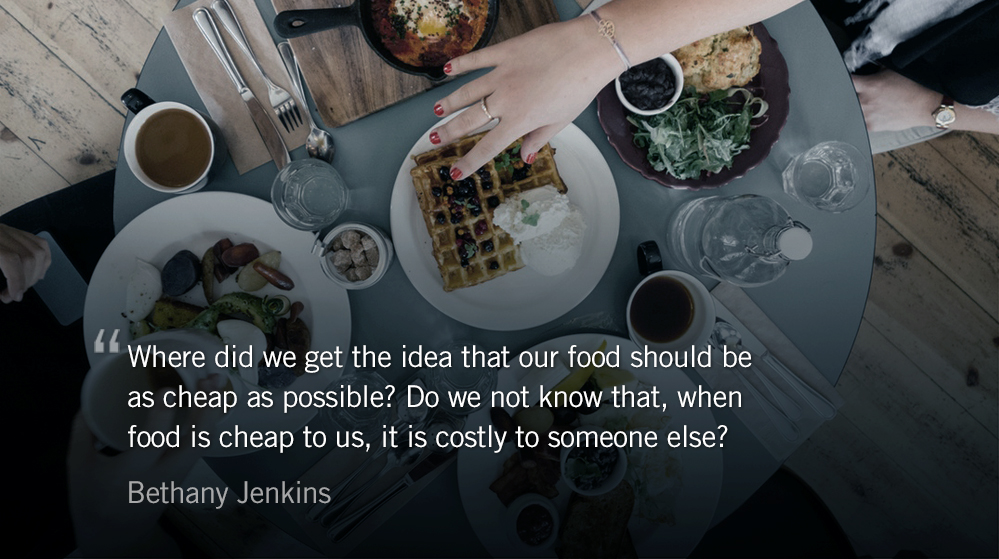 Scripture’s focus on every facet of the tabernacle and temple is remarkable—God’s dwelling place, and the materials used to create it, were selected and prepared with the fastidious care. The New Testament confesses that the bodies of the faithful are the new temple of God’s Spirit.
To build this theology the authors of Scripture first caution against vanity. The care given to the temple was not to make it beautiful for its own sake, but to display the glory of God. At the same time, they challenge the early Christians to see how their decisions in the physical world affect their bodies.
In a recent article Bethany Jenkins, our founder at The Park Forum, asked, Do You Know Where Your Food Comes From? It’s a wonderful question that expands the discussion of faith and food beyond healthy eating to exploring how Christians can cultivate human flourishing through the food we consume.

Where did we get the idea that our food should be as cheap as possible? Do we not know that, when food is cheap to us, it is costly to someone else? Regular baking cocoa is cheaper than its fair trade equivalent, at least in part, because only a tiny portion of its profits goes to its growers.

It was Franklin D. Roosevelt’s administration that, following the Great Depression, worked aggressively to lower the percentage of the average American salary that went to food and rent. In our world today, the loss of this easy-to-access and inexpensive food creates what the U.S. Department of Agriculture calls a “food desert.”
Journalists Phillip Lucas And Mike Schneider explain the ripple effects of a food desert created by the closure of a neighborhood’s Wal-Mart:

In Wichita (Kansas), the Wal-Mart that opened four years ago became a community hub in a shopping plaza that previously had been a haven for prostitution and gang shootings, said Pastor Kevass Harding, whose Dellrose United Methodist Church is right by the store.
“We had a place that used to be an eyesore, but then we had a first-class shopping center in this urban neighborhood,” Harding said. “So last week we get the news, my heart just broke. I was disgusted that it’s about money. It’s not about the people.”

The reality that cheap food has become about profit cannot be understated—just ten companies now manufacture almost everything Americans eat. The public’s awareness of the modern industrial food complex has opened up an opportunity for a host of local, organic, and hand-crafted food start-ups. Yet the price mark up on these foods causes pause. This is where Jenkins asks, “If we commit ourselves to ethical food sourcing, will the higher prices we pay be worth it?”
The answer, at least in part, is found in knowing where our food comes from—and maintaining a healthy skepticism toward the narrative crafted around it. Last year the Mast Brothers, who sell “artisanal chocolate” for $10 a bar, were accused of remelting high-cacao-butter chocolate from the French chocolate manufacturer Valrhona to create what they claimed were their own “bean to bar” chocolates. This unleashed what can only be described as chocolate kerfuffle.
In The Way Forward for Hipster Food Dana Goodyear explains the lesson for those trying to make informed purchasing decisions around food:

Old-fashioned food: let’s examine its appeal for a moment. So much of the artisanal movement is about a return to pre-industrial aesthetics and flavors, a celebration of the home- and handmade… But the Victorian era the movement makes loving reference to was not a wonderful time to be a consumer.
In the moment that the Masts’ aesthetic conjures, food was an anxious proposition, unregulated and rife with chicanery—lead in the red candy, chalk in the milk. Deep in our memories, along with the nostalgia for mustache wax, lies the awareness that stories about food are not always true, and that buying into them can be dangerous.

The main question for people of faith is not about recovering a lost aesthetic, but about the value of spending more money on food that is ethically sourced, humanely raised, and environmentally conscious. “UNICEF estimates that 200,000 children are working in the cocoa fields of the Ivory Coast,” Jenkins writes, “and up to 12,000 of them may be victims of trafficking or slavery.”
It’s up to us as consumers to raise our awareness of laborers in the food industry. As stewards of this world we cannot turn our eyes away from the effects of industrial food production on the environment or the horrific treatment of animals by the poultry, beef, and dairy industries. Our decisions in the physical world affect God’s dwelling place and, through that, our world.
Thoughtfulness around this matters for Christians because, as the leaders of the Lausanne Movement write,

The earth is created, sustained and redeemed by Christ. We cannot claim to love God while abusing what belongs to Christ by right of creation, redemption and inheritance. We care for the earth and responsibly use its abundant resources, not according to the rationale of the secular world, but for the Lord’s sake.
If Jesus is Lord of all the earth, we cannot separate our relationship to Christ from how we act in relation to the earth. For to proclaim the gospel that says ‘Jesus is Lord’ is to proclaim the gospel that includes the earth, since Christ’s Lordship is over all creation. Creation care is thus a gospel issue within the Lordship of Christ.