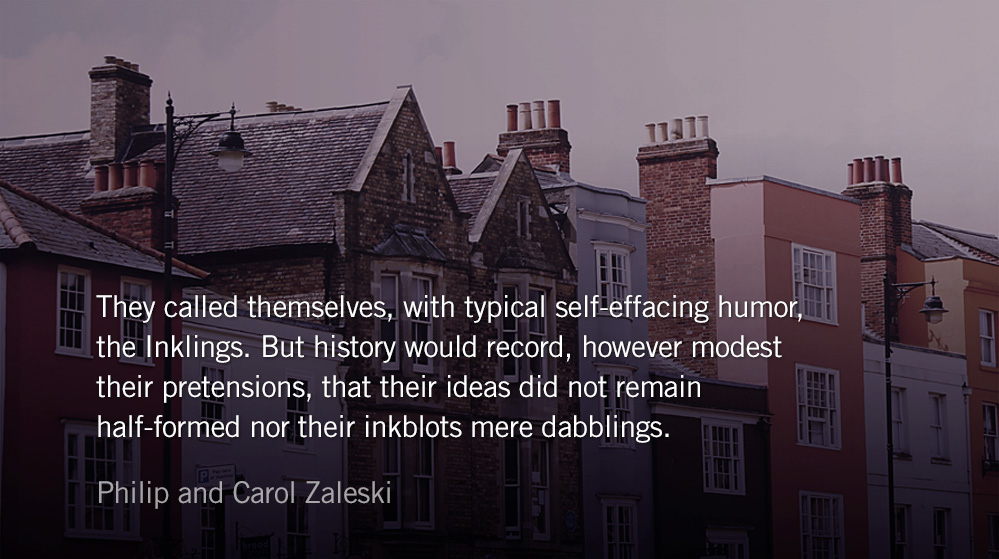 By Philip and Carol Zaleski

During the hectic middle decades of the twentieth century, from the end of the Great Depression through World War II and into the 1950s, a small circle of intellectuals gathered on a weekly basis in and around Oxford University to drink, smoke, quip, cavil, read aloud their works in progress. They called themselves, with typical self-effacing humor, the Inklings.

But history would record, however modest their pretensions, that their ideas did not remain half-formed nor their inkblots mere dabblings. By the time the last Inkling passed away on the eve of the twenty-first century, the group had altered, in large or small measure, the course of imaginative literature (fantasy, allegory, mythopoeic tales), Christian theology and philosophy, comparative mythology, and the scholarly study of the Beowulf author, of Dante, Spenser, Milton, courtly love, fairy tale, and epic; and drawing as much from their scholarship as from their experience of a catastrophic century, they had fashioned a new narrative of hope amid the ruins of war, industrialization, cultural disintegration, skepticism, and anomie.

Interest in the Inklings often first dawns in the minds of readers who have fallen in love with Tolkien and Lewis, and wish to enter more deeply into their spiritual and imaginative cosmos.

Lewis resembled, many said, the neighborhood butcher. Add the ubiquitous tweed jacket and flannel slacks, and he comes up in the world, but only as far as a midlevel accountant. He dressed like an ordinary man. He cultivated an image, that of the ordinary chap, endowed perhaps—one can do nothing about these things—with extraordinary brains, who lived an ordinary life of plain talk, plain food, and plain faith [“Mere Christianity”].

As a scholar, he made sure never to be mistaken for an aesthete. ‘What is life’s greatest pleasure?’ he asked his doctoral student, the future Renaissance scholar Alastair Fowler. Lewis ticked off the possibilities—Fowler remembers them as great art, mystical ecstasy, simultaneous orgasm—rejecting them one by one. “I’ll tell you,” Lewis said. “It’s the pleasure, after walking for hours, of coming to a pub and relieving yourself.”

But this sensuous side of Lewis’s nature was a late development. Lewis as a youth was extraordinarily uncomfortable in his body. His face betrayed him, broadcasting arrogance or anger in just those moments when he was feeling particularly meek or contrite. Each thumb had only one joint, a defect that led, when shaving, tying laces, or attempting other normal manipulations, to fury and tears.

He inhabited his young body as if it were a suit of armor; and if his face was doomed to miscommunicate his true feelings, he would have to learn to play the parts assigned to him, until, as an adult, he could assume his chosen part as Everyman.