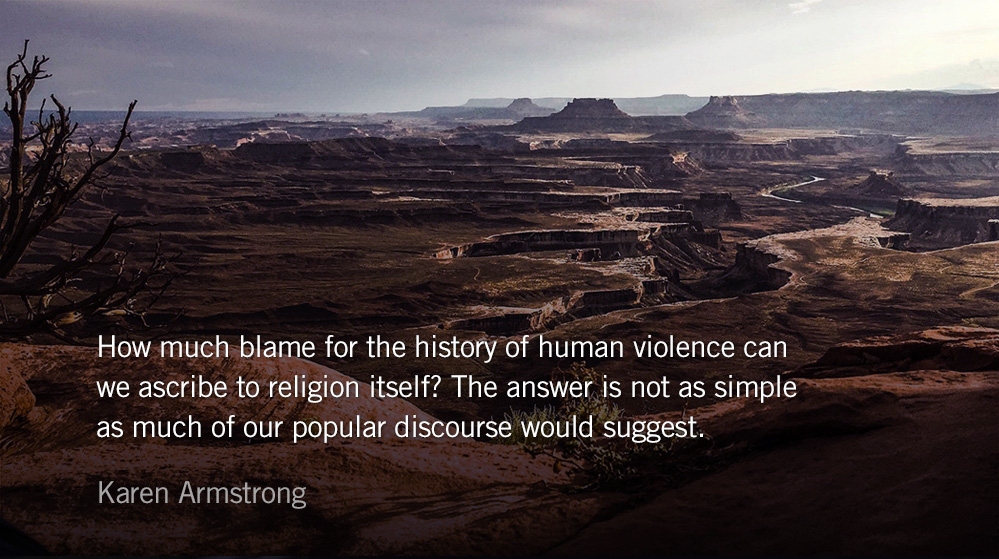 I believe modern society has made a scapegoat of faith. In the West the idea that religion is inherently violent is now taken for granted and seems self-evident. As one who speaks on religion, I constantly hear how cruel and aggressive it has been, a view that, eerily, is expressed in the same way almost every time: “Religion has been the cause of all the major wars in history.”

It is an odd remark. Obviously the two world wars were not fought on account of religion. Experts on political violence or terrorism also insist that people commit atrocities for a complex range of reasons. Yet so indelible is the aggressive image of religious faith in our secular consciousness that we routinely load the violent sins of the twentieth century onto the back of “religion” and drive it out into the political wilderness.

Since all premodern state ideology was inseparable from religion, warfare inevitably acquired a sacred element. But to what degree did religion contribute to the violence of the states with which it was inextricably linked? How much blame for the history of human violence can we ascribe to religion itself? The answer is not as simple as much of our popular discourse would suggest.

People rarely go to war for one reason only; rather, they are driven by interlocking motivations—material, social, and ideological. Until the modern period, religion permeated all aspects of life, including politics and warfare, not because ambitious churchmen had “mixed up” two essentially distinct activities but because people wanted to endow everything they did with significance. Every state ideology was religious.

It was not until the seventeenth and eighteenth centuries that religion was ejected from political life in the West. When, therefore, people claim that religion has been responsible for more war, oppression, and suffering than any other institution, one has to ask, “More than what?”

Until the American and French Revolutions, there were no “secular” societies. So ingrained is our impulse to “sanctify” our political activities that no sooner had the French revolutionaries successfully marginalized the Catholic Church than they created a new national religion. In the United States, the first secular republic, the state has always had a religious aura, a manifest destiny, and a divinely sanctioned mission.

If we are to meet the challenge of our time and create a global society where all peoples can live together in peace and mutual respect, we need to assess our situation accurately. We cannot afford oversimplified assumptions about the nature of religion or its role in the world.