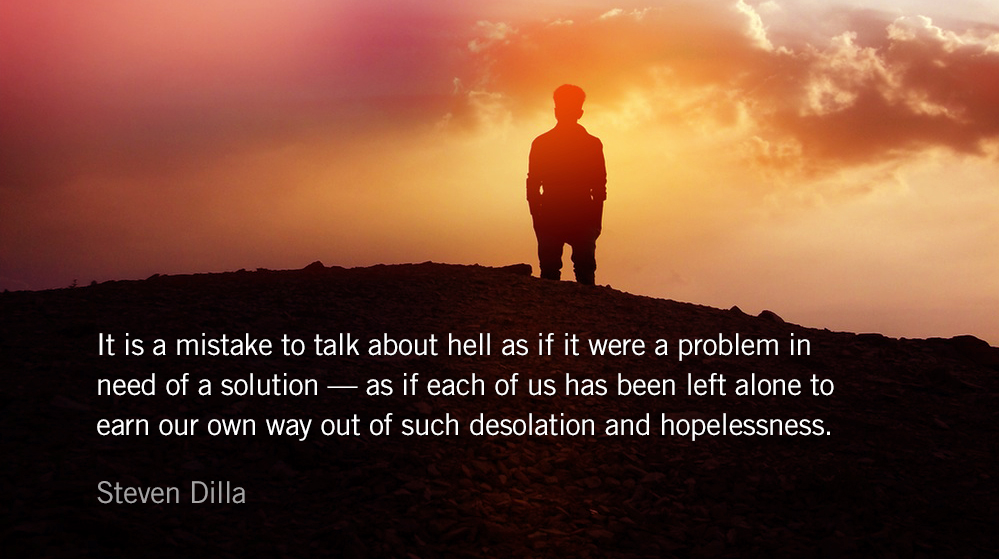 Psalm 80.19
Restore us, O LORD God of hosts! Let your face shine, that we may be saved!

Hell is distance from God; heaven is intimacy with him. It is a mistake to talk about hell as if it were a problem in need of a solution — as if each of us has been left alone to earn our own way out of such desolation and hopelessness. The reality, as unsettling as it may be, is that humanity finds itself rejecting the solution to hell which has already been provided — Christ himself.

“The doors of Hell are locked on the inside,” C.S. Lewis says in The Problem of Pain. “I do not mean that the ghosts may not wish to come out of Hell, in the vague fashion wherein an envious man ‘wishes’ to be happy: but they certainly do not will even the first preliminary stages of that self-abandonment through which alone the soul can reach any good. They enjoy forever the horrible freedom they have demanded, and are therefore self-enslaved.”

In his work Seeing Hell through the Reason and Imagination of C. S. Lewis Douglas Beyer summarizes, “The saved go to a place prepared for them, while the damned go to a place never made for men at all. To enter heaven is to become more human than you ever succeeded in being in earth; to enter Hell, is to be banished from humanity.”

Yet because of our pride and brokenness we reject not only the place prepared, but the One who prepared it. Beyer sees this theme pervasively in Lewis’ work. He summarizes, “Lewis depicts the damned as rushing insistently into their hells, despite the efforts of God to persuade them not to.”

Christ is God’s magnificent effort — not only to persuade, but to sufficiently meet every need, answer every longing, and fulfill every hope. It is in Christ that we find not merely the solution to our greatest problem, but also everything we need to thrive in life and flourish for eternity.

“The blessed,” Lewis concludes, “forever submitting to obedience, become through all eternity more and more free.”

Prayer
Lord our hearts are rebellious. You pursue us though we rush away. We see your love for us; you have given yourself while we are yet sinners. Thank you for the freedom of your love. Help us to embrace you as our only hope.

Life and Death Apart from God
Part 3 of 5, read more on TheParkForum.org

Hell as a Termination Point

Psalm 79.2
They have left the dead bodies of your servants as food for the birds of the sky, the flesh of your own people for the animals of the wild.

Hell is the termination point for those who cut themselves off from God and are finally left with no other options. We see this supremely in the personification of evil — for whom hell was designed. “Satan’s monomaniac concern with himself and his supposed rights and wrongs is a necessity of the Satanic predicament,” C.S. Lewis writes in his Preface to Paradise Lost. “Certainly, he has no choice. He has chosen to have no choice. He has wished to ‘be himself,’ and to be in himself and for himself, and his wish has been granted.”

We underestimate how rejection of God builds until it consumes. In The Great Divorce Lewis wrote, “It begins with a grumbling mood, and yourself still distinct from it: perhaps criticizing it. And yourself, in a dark hour, may will that mood, embrace it. Ye can repent and come out of it again. But there may come a day when you can do that no longer. Then there will be no ‘you’ left to criticize the mood, nor even to enjoy it, but just the grumble itself going on forever like a machine.”

Prayer
Lord, thank you that what saves us from these choices isn’t brute strength to make better choices but the overwhelming glory of your mercy and grace as given to us by your son. Like the psalmist we see evil all around us. Help us also to see the reality of evil in our own hearts and the way it sets us on a path to destruction. Father, set our sights on Jesus, our hope of glory. Overwhelm us with your grace.

Life and Death Apart from God
Part 2 of 5, read more on TheParkForum.org

Psalm 78.52-53
But God brought his people out like a flock; he led them like sheep through the wilderness. He guided them safely, so they were unafraid; but the sea engulfed their enemies.

“Hell is the greatest monument to human freedom,” C.S. Lewis contends. Although the idea of hell is contentious in modern society it is difficult to dismiss — our desire for justice demands punishment for the wicked. This tension is not new and symbolism found in the Psalms offers help reconciling a loving God and the idea of hell.

The sea was a place of terror for ancient people. Without modern maps, weather prediction, or the possibility of rescue, everyone knew someone who went out to sea and never returned. For Hebrew writers the sea was a symbol of evil — one which God would destroy in the end.

The sea engulfing the enemies of God is one of evil meeting its full end. The ancient Egyptians brutally enslaved God’s people, callously disregarded God’s words, and relentlessly pursued Israel after their divine liberation. Evil’s consumption of itself was the natural crescendo of their wickedness.

The story of the Exodus is our story. Jesus’ insistence that he is revealed in every scripture means that we can’t reject the idea of hell until we find Christ in our understanding of it.

Of those who reject the idea of hell Lewis asks, “What are you asking God to do? To wipe out their past sins and, at all costs, to give them a fresh start, smoothing every difficulty and offering every miraculous help? But He has done so, on Calvary. To forgive them? They will not be forgiven. To leave them alone? Alas, I am afraid that is what he does.

“There are only two kinds of people in the end: those who say to God, ‘Thy will be done’ and those to whom God says, in the end, ‘THY will be done,’” Lewis observes in The Great Divorce. “All that are in Hell choose it. Without that self-choice, there could be no Hell. No soul that seriously and constantly desires joy will ever miss it. Those who seek, find. To those who knock, it is opened.”

Prayer
Father in modern society’s rejection of eternity we have lost the idea that our actions have consequences. Hell may be a chosen, but heaven is not earned. We owe heaven to your mercy and grace on us. Lead us this day in the pathway of your Kingdom.

Life and Death Apart from God
Part 1 of 5, read more on TheParkForum.org

A Song of Praise

*Editor’s Note: Last week we explored how to fill our prayers with arguments before the Lord. This week, we model prayers that do that.

We are tired this morning. Help us. Open our eyes so that we may see wonders in your Word.

O God. How mighty is your great name! Maker of heaven and earth and the universe. That you should hear our whispers when we are half awake. That you should spend time with us while millions pray. That you should call our feeble flesh the temple of the Holy Spirit. That you should speak to us personally through the Word and Spirit. O God, what condescension! What unutterable mercy to attend to us! Help us believe and feel this truth: that we are your people and that you are our God.

Today, we come together — 4,000 of us who read this devotional daily — and we raise our voices as one, saying with Psalm 75, “We praise you, God, we praise you, for your Name is near; people tell of your wonderful deeds.” Yes, we pray that you would give us grace, blessings and favor. For we are a people who need you. Define us as your people and be our God.

We do not ask for your grace, blessings and favor only for our sake; we ask these things for the sake of your great name. When you tied your name to us, your people, you tied your glory and reputation to us. When the nations see how you bless us, they will see how great you are. Therefore, we pray that you give us grace, blessings and favor. That your way may be known on earth. That your saving power may be proclaimed among the nations. Fill us with joy in you. Give us delight in our salvation.

As we consider our nation, Lord, we wonder, “Who are we? Where are we? How did we get here? Where are we going?” We are in a state of confusion. Instead of being a city on a hill, we are a full of infighting and pettiness.

Sadly, Lord, this is true even for the church. We have accepted relativism and tolerance over truth and virtue. Yet your Word teaches us that only the truth will set us free. Forgive us. Let us cling to truth so that we may receive your grace, blessings and favor. For the sake of your great name.

Arguing with God
Part 5 of 5, read more on TheParkForum.org

Peace for the Hurting

*Editor’s Note: Last week we explored how to fill our prayers with arguments before the Lord. This week, we model prayers that do that.

Meet with us this morning. Awaken us with a song of praise in our hearts and on our lips. Give us a vision for service in our cities. Incline our hearts to the Word and not to getting gain. Fill us with your Spirit of wisdom, joy and righteousness. Make us happy children, spouses, parents, friends, citizens and colleagues. Bind our hearts to one another and bind our hearts to you through the new covenant that is sealed by the blood of Jesus Christ our Lord.

As we look at the world around us, we see great turmoil. Not only is there confusion in our own country, there is disorder throughout the nations.

We pray, as the psalmist did in Psalm 74; “Do not let the oppressed retreat in disgrace; may the poor and needy praise your name. Rise up, O God, and defend your cause; remember how fools mock you all day long. Do not ignore the clamor of your adversaries, the uproar of your enemies, which rises continually.”

Do not leave your work unfinished. What you have begun, do not fail to complete. You are an unchanging God, who will do in the future what you have done in the past. For you do not turn from your purpose and cannot be thwarted in your design.

Therefore, go before us, as you did with the Hebrews. March through the wilderness and shake the earth. Cause the heavens to pour down rain in abundance. In your goodness, provide for the needy, displaced, homeless, and weak. Make yourself known to them.

You are a God who cares for victims of violence and oppression. You spread your cloak over refugees and foreigners. For your people were aliens in a land not their own and you sustained them. We were aliens without an inheritance to your promises and you adopted us through Jesus. Therefore, heal your people and use us as your hands and feet.

Arguing with God
Part 4 of 5, read more on TheParkForum.org