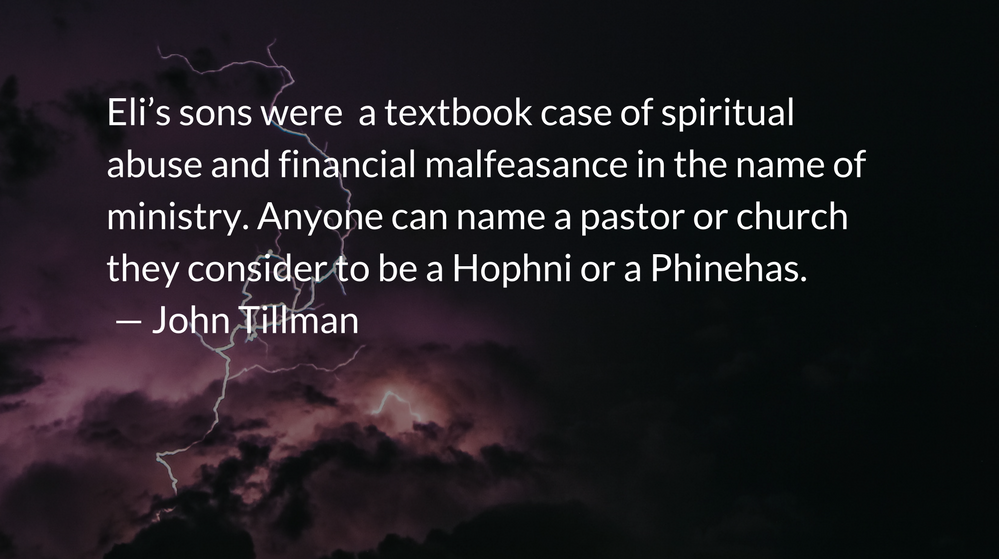 Scripture: 1 Samuel 2.12
Eli’s sons were scoundrels; they had no regard for the Lord.

I have suffered grievously in my life from stupid, tired, dimmed, and even bad priests. — JRR Tolkien

Eli’s sons were corrupt in the extreme. They stole from the offerings of the people, committing financial sins and threatening violence toward those who objected. They used their spiritual positions of power to manipulate and pressure women at the tabernacle for sexual favors. The Bible says Eli and his sons grew fat off of the offerings of the people. They are a textbook case of spiritual abuse and financial malfeasance in the name of ministry.

Anyone, even unbelievers, can name a pastor or church they consider to be a Hophni or a Phinehas. Among non-believers and those leaving the church, some common reasons are corrupt, abusive, or just plain bad leadership.

Ministers who are corrupt or simply incompetent and foolish are nothing new to Christianity. JRR Tolkien wrote to his son concerning this issue.

I think I am as sensitive as you (or any other Christian) to the ‘scandals’, both of clergy and laity. I have suffered grievously in my life from stupid, tired, dimmed, and even bad priests; but I now know enough about myself to be aware that I should not leave the Church for any such reasons…Our love may be chilled and our will eroded by the spectacle of the shortcomings, folly, and even sins of the Church and its ministers, but I do not think that one who has once had faith goes back over the line for these reasons (least of all anyone with any historical knowledge).

It can be difficult to worship God under corrupt leaders and it can even be difficult to celebrate their good moments. Hannah received her prophecy and blessing of Samuel’s birth through the tainted ministry of Eli and his sons, but rather than redeeming their ministry, it was the first step in God wiping them out.

Samuel comes to remind us that judgment is coming for the Hophni’s, Phinehas’s, and Eli’s of the world, and for us as well. That judgment has fallen on Christ, and we all receive his same mercy.

The Request for Presence
Worship the Lord in the beauty of holiness; let the whole earth tremble before him. — Psalm 96.9