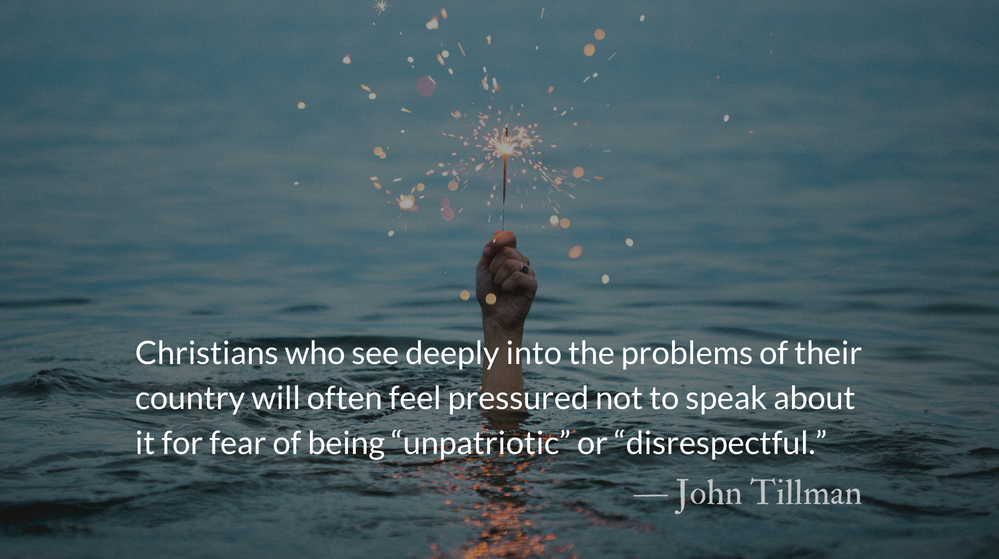 Scripture: Jeremiah 1.18-19
Today I have made you a fortified city, an iron pillar and a bronze wall to stand against the whole land—against the kings of Judah, its officials, its priests and the people of the land. They will fight against you but will not overcome you, for I am with you and will rescue you,” declares the Lord.

In Harold Wilmington’s commentary on the book of Jeremiah, he points out that Jeremiah’s refusal to embrace a politically expedient alliance with Egypt, “gained him the hatred of ‘patriotic’ Israelites who saw Egypt as their only hope.”

When religion gets mixed up with patriotism, things turn ugly. That ugliness is part of what birthed the western ideals of freedom of religion and freedom of expression.

Christians who see deeply into the problems of their country will often feel pressured not to speak about it for fear of being “unpatriotic” or “disrespectful.”

Dietrich Bonhoeffer dealt with this pressure in Berlin when Nazi power and influence were rising. In a sermon delivered on German Memorial Day in 1932, he foresaw that the church would have difficulty speaking truth to power if patriotism became more highly valued than Christ.

The church is like the seer of ancient times who, when all are gathered to commemorate a great deed of the nation, is wholeheartedly present but suffers because he sees something that the others do not see and must speak of what he sees, although no one wants to hear it.

And if it happens anyway, you have to try to get rid of a person like that. And so it happens then that such seers are thrown out of the celebration, chased away with scorn and contempt by the very people they want to help, whom they love like nothing else in the world. But especially because they love them so much, they have become seers.

The one who loves the most is the one who sees deepest, sees the greatest danger. A seer has never been popular. That is why the church will also not be popular, least of all on days like this.

The most patriotic thing Christians can do is see the problems of our nation and speak the gospel to them.

Let them throw us in a cistern like Jeremiah.
Let them burn our words rather than listen to them.
May we be faithful to Christ and his kingdom alone.

Prayer: The Request for Presence
Be seated on your lofty throne, O Most High; O Lord, judge the nations. — Psalm 7.8

Additional Reading
Read More about fear and nationalism — Fear in the Boat :: Throwback Thursday
In this fearful world is a place meant for all time, which has a peculiar task that the world doesn’t understand…This place…is the pulpit of the church.

Read More about Celebrating Earthly Kingdoms
In 1932 Germany, Dietrich Bonhoeffer struggled in a Memorial Day sermon with how patriotic days should be celebrated in his Berlin church.