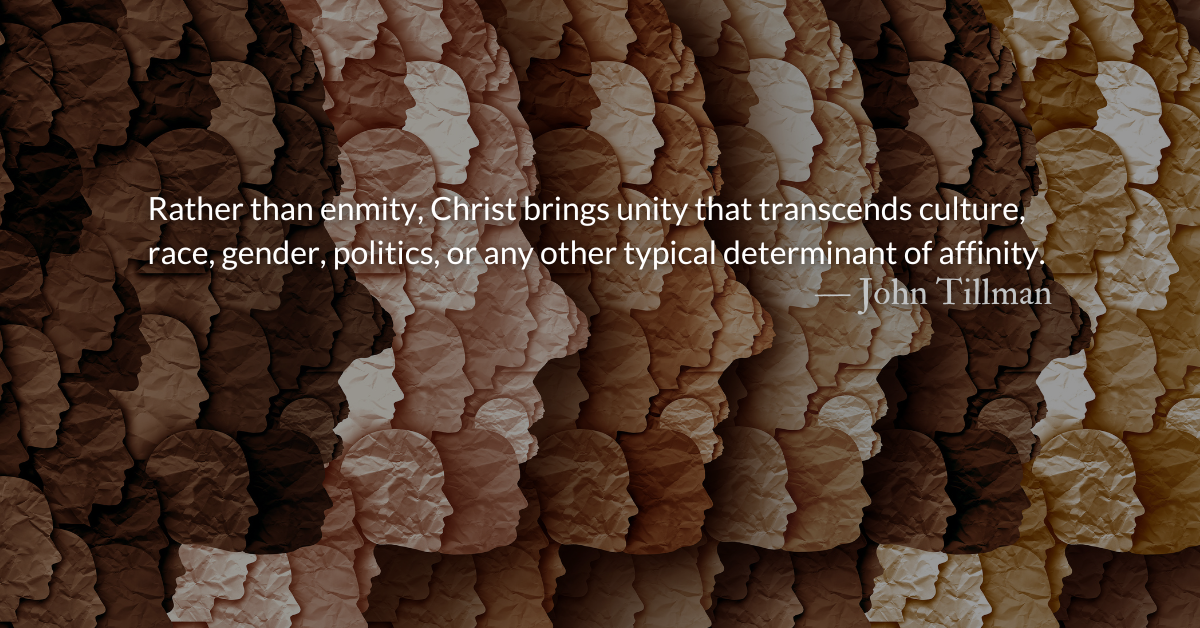 Scripture Focus: Ephesians 2.11-22
11 Therefore, remember that formerly you who are Gentiles by birth and called “uncircumcised” by those who call themselves “the circumcision” (which is done in the body by human hands)—12 remember that at that time you were separate from Christ, excluded from citizenship in Israel and foreigners to the covenants of the promise, without hope and without God in the world. 13 But now in Christ Jesus you who once were far away have been brought near by the blood of Christ.

14 For he himself is our peace, who has made the two groups one and has destroyed the barrier, the dividing wall of hostility, 15 by setting aside in his flesh the law with its commands and regulations. His purpose was to create in himself one new humanity out of the two, thus making peace, 16 and in one body to reconcile both of them to God through the cross, by which he put to death their hostility. 17 He came and preached peace to you who were far away and peace to those who were near. 18 For through him we both have access to the Father by one Spirit.

19 Consequently, you are no longer foreigners and strangers, but fellow citizens with God’s people and also members of his household, 20 built on the foundation of the apostles and prophets, with Christ Jesus himself as the chief cornerstone. 21 In him the whole building is joined together and rises to become a holy temple in the Lord. 22 And in him you too are being built together to become a dwelling in which God lives by his Spirit.

Paul’s writings counter the cultural pressures to separate along racial lines and his ministry shows us how he resisted this pressure.

Paul traveled with, taught alongside, and ministered to Jews, Greeks, men, and women. He associated with Roman government officials, wealthy businesswomen, common laborers, and runaway slaves. Paul referred to all these people as “co-laborers” in the gospel. Paul declared and demonstrated that Christ takes foreigners and strangers and unites them as one people. The way of the world is hostility and enmity. The way of Christ is love and unity.

Paul is unavoidably clear that Christ destroyed the dividing wall of hostility between people of different ethnic backgrounds. There is no redlining in the Kingdom of Heaven. Let us not, therefore, allow some Christian voices to entice us to rebuild these walls.

A growing belief in evangelicalism, Kinism, holds that God sovereignly ordained “races” and that we are to maintain them, keeping them separate. This heretical view is simply the warmed-over and renamed theology of the Klu Klux Klan, repackaged in softer, more academic-sounding language. Underneath, it is the same deadly poison leading to the same deadly outcomes.

Those who promote Kinism wrap it in a cloak of nationalistic patriotism mixed with Christian duty. They defend it by twisting scriptures and embrace Christian authoritarianism to enforce their beliefs. They claim that “loving one’s neighbor” applies primarily to one’s own race,  discounting the parable of the Good Samaritan. (Luke 10.29-37) They call justice “reverse racism.” They call mercy effeminate (meaning it as an insult). They call humility weakness. (Micah 6.8)

More than a theological heresy, Kinism is a recipe for violence and never peace. In the United States, “White Replacement Theory,” is the direct outcome of Kinist logic. This theory, promoted by some pastors, media voices, and politicians has motivated violence targeting Blacks, Asians, and Jews in recent years. This violence is driven by enmity arising from Kinism.

Rather than enmity, Christ brings unity that transcends culture, race, gender, politics, or any other typical determinant of affinity. Christians don’t like only one another because we like the same things. We love all people because all people are loved by God.

Bad theology and thinking precede bad action. Therefore protecting against violence requires speaking out to counter Kinist lines of thought, whether spread by Christians, politicians, or the media. Before the next violent act, raise your voice.

Read more about Putting To Death Racial Hostility
Throughout history, the church has struggled to keep various strains of racism from infecting and crippling the church and its work.