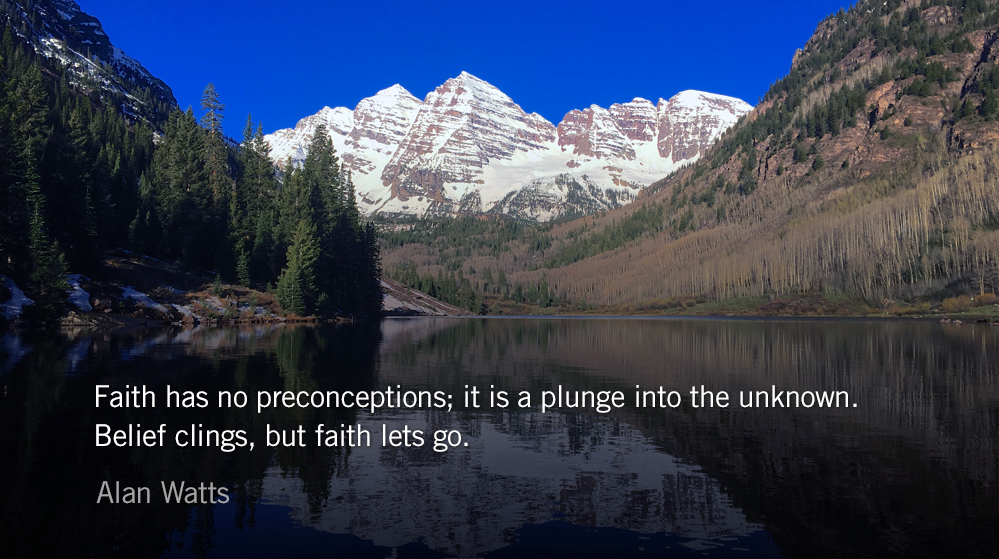 A Plunge into the Unknown

[Jesus proclaimed,] “The time is fulfilled, and the kingdom of God is at hand; repent and believe in the gospel.” — Mark 1.15

How Jesus’ command to “repent and believe in the gospel” is interpreted significantly shapes what day-to-day faith looks like. For moralists, the command is a linear progression: repent of moral fault and then believe (e.g. pray a prayer of some sort). This understanding leads to a lifetime of confronting outsiders with a perspective on morality in order to trigger a moment of belief.

Jesus words aren’t referring to a momentary decision nor an infinite loop of guilt and pride. When we read them together they describe the recursive act of faith.

In general practice, belief has come to mean a state of mind which is almost the opposite of faith. Belief, as I use the word here, is the insistence that the truth is what one would “lief” or wish it to be. The believer will open his mind to the truth on the condition that it fits in with his preconceived ideas and wishes.

Faith, on the other hand, is an unreserved opening of the mind to the truth, whatever it may turn out to be. Faith has no preconceptions; it is a plunge into the unknown. Belief clings, but faith lets go. In this sense of the word, faith is the essential virtue of science, and likewise of any religion that is not self-deception.

The opposite of believing the gospel isn’t disbelief, it’s unfaithfulness. You can fully “believe” the gospel and yet rest none of your faith inside of it. To repent and believe the gospel is to divest one’s faith from everything in the world except Christ.