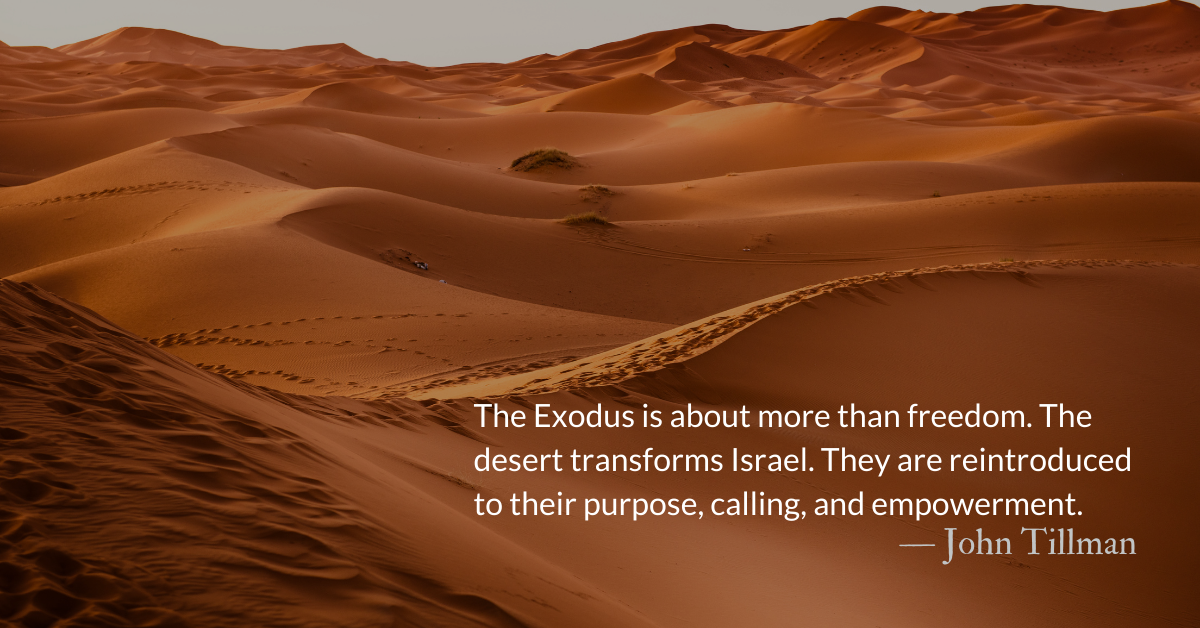 The Sojourn of Sanctification

Scripture Focus: Deuteronomy 27.9-10
9 Then Moses and the Levitical priests said to all Israel, “Be silent, Israel, and listen! You have now become the people of the Lord your God. 10 Obey the Lord your God and follow his commands and decrees that I give you today.”

Reflection: The Sojourn of Sanctification
By John Tillman

The desert sojourn is a transforming experience for Israel and this process of sanctification can be mirrored in the lives of modern believers.

When Israel entered Egypt, they were small, humble, and in need but carried with them God’s blessing. Egypt, so long as she remembered Joseph, enjoyed these blessings and was transformed into a nation that blessed other nations. Soon, however, nationalism took hold in Egypt. Joseph was forgotten. Foreigners were to be feared and exploited. Generations of Israilites were oppressed in slavery. They became a people unfamiliar with freedom and separated from the pleasures of life. They were disconnected from their calling to bless others.

God’s people are always in a process of becoming. Moses says, “Be silent…you have now become the people of the Lord, your God.” (Deuteronomy 27.9) When we come to Christ, we are freed from sin as the Israelites were freed from Egyptian slavery. Sin’s chains are struck from our hands in an instant, but it takes time in the desert with God’s word for the chains of an enslaved mindset to be melted from our hearts.

Jesus says, “For them I sanctify myself, that they too may be truly sanctified.” (John 17.19) Jesus is our model, our pattern, our leader to follow through the desert as we are changed from one kind of people to another.

Paul says, “We…are being transformed into his image, with ever-increasing glory.” (2 Corinthians 3.18) God is glorified with every step we take in becoming more like Christ.

We are like the people of Israel in many ways. We are not just freed from sin, but called for a purpose. The desert of sanctification is transformational so let us hold nothing back from its influence. May we become the people of the Lord our God.

Divine Hours Prayer: A Reading
Jesus taught us, saying: “It is not anyone who says to me, ‘Lord, Lord,’ who will enter the kingdom of heaven, but the person who does the will of my Father in heaven. When the day comes many will say to me, ‘Lord, Lord, did we not prophesy in your name?’ Then I shall tell them to their faces: ‘I have never known you; away from me all evildoers!’” — Matthew 7.21-23

Read more about Attending God’s Lessons
Through their liberation from Egypt and their time in the desert, God became Israel’s teacher.

Read more about Ready to Exit the Desert
Their faith wasn’t ready to exit the desert and enter the promised land. Desert months turned into desert decades.