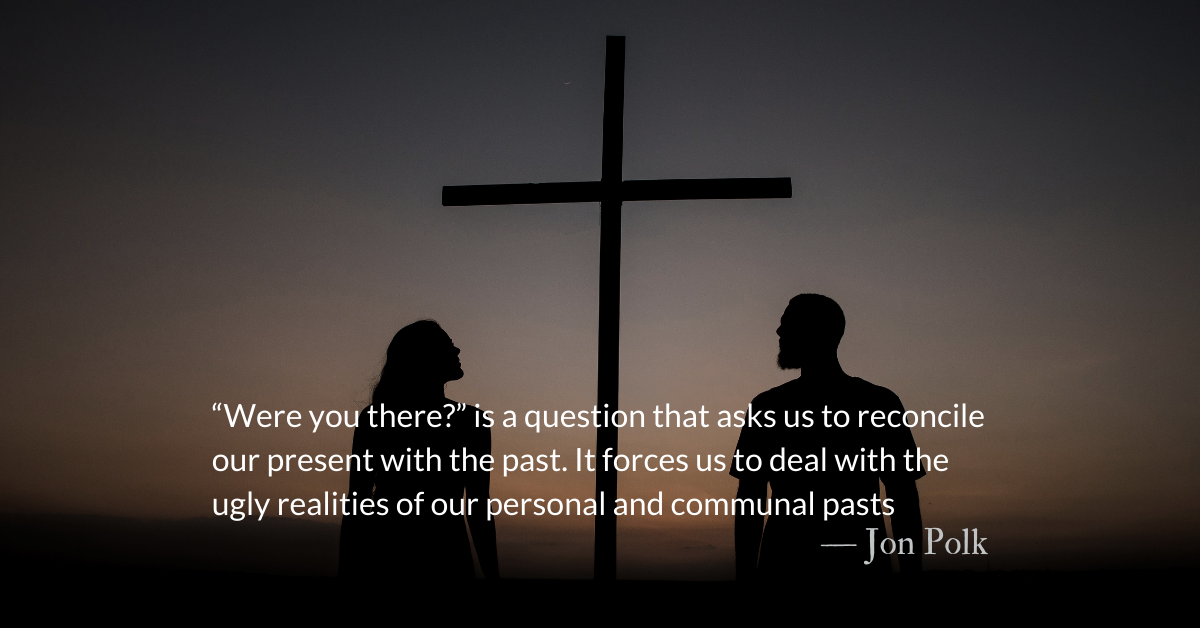 Were You There? — Lenten Hymns

Scripture Focus: John 19:16-18, 28-30
16 Finally Pilate handed him over to them to be crucified. So the soldiers took charge of Jesus. 17 Carrying his own cross, he went out to the place of the Skull (which in Aramaic is called Golgotha). 18 There they crucified him, and with him two others—one on each side and Jesus in the middle.

28 Later, knowing that everything had now been finished, and so that Scripture would be fulfilled, Jesus said, “I am thirsty.” 29 A jar of wine vinegar was there, so they soaked a sponge in it, put the sponge on a stalk of the hyssop plant, and lifted it to Jesus’ lips. 30 When he had received the drink, Jesus said, “It is finished.” With that, he bowed his head and gave up his spirit.

Reflection: Were You There? — Lenten Hymns
By Jon Polk

The hauntingly beautiful hymn, “Were You There?” poses profound imaginative and reflective questions.

Each verse paints a bleak and dismal picture which, upon contemplation, can only cause us to shudder and tremble as we are confronted with these ugly realities.

One of the most recognizable African-American spirituals, “Were You There?” emerged from the slave experience in the U.S. in the mid-1800s. While outwardly the song asks us to imagine ourselves at the scene of the cross, when sung by slaves, it metaphorically connected Jesus’ suffering to their own.

Henry Proctor, minister at the First Congregational Church in Atlanta, referenced the hymn in The Southern Workman journal in 1907. Proctor, whose parents were both former slaves, described the work of Christ as found in slave spirituals,

They bore testimony to [Christ’s] divinity by their belief in his supernatural power, resurrection, royalty, regnancy, and atoning work. But to them he was also human. He was “a man of sorrows.” He could sympathize with those “acquainted with grief.” How solemnly and sweetly they sang of his crucifixion, “Were you there when they crucified my Lord?”

Modern American theologian, James Cone, notes in The Cross and the Lynching Tree, that the same is still true in African-American churches today,

During my childhood, I heard a lot about the cross at Macedonia A.M.E. Church, where faith in Jesus was defined and celebrated. We sang… and asked, “Were you there?” There were more songs, sermons, prayers, and testimonies about the cross than any other theme. The cross was the foundation on which their faith was built.

The season of Lent culminates in Passion Week, which does not allow us to arrive at the joy of the resurrection without passing through the pain and tragedy of the crucifixion. Lent gives us an opportunity to consider our response to the cross and, likewise, to injustices in our world.

“Were you there?” is a question that asks us to reconcile our present with the past. It calls us to measure what impact the events of the past have had on our lives in the present. It forces us to deal with the ugly realities of our personal and communal pasts.

Divine Hours Prayer: The Refrain for the Morning Lessons
For who is God, but the Lord? Who is the Rock, except our God? — Psalm 18.32

Read more about Beneath the Cross of Jesus — Lenten Hymns
Not only do we find rest in the cruel cross of Jesus, but his sacrifice compels us to give our own lives away for others.