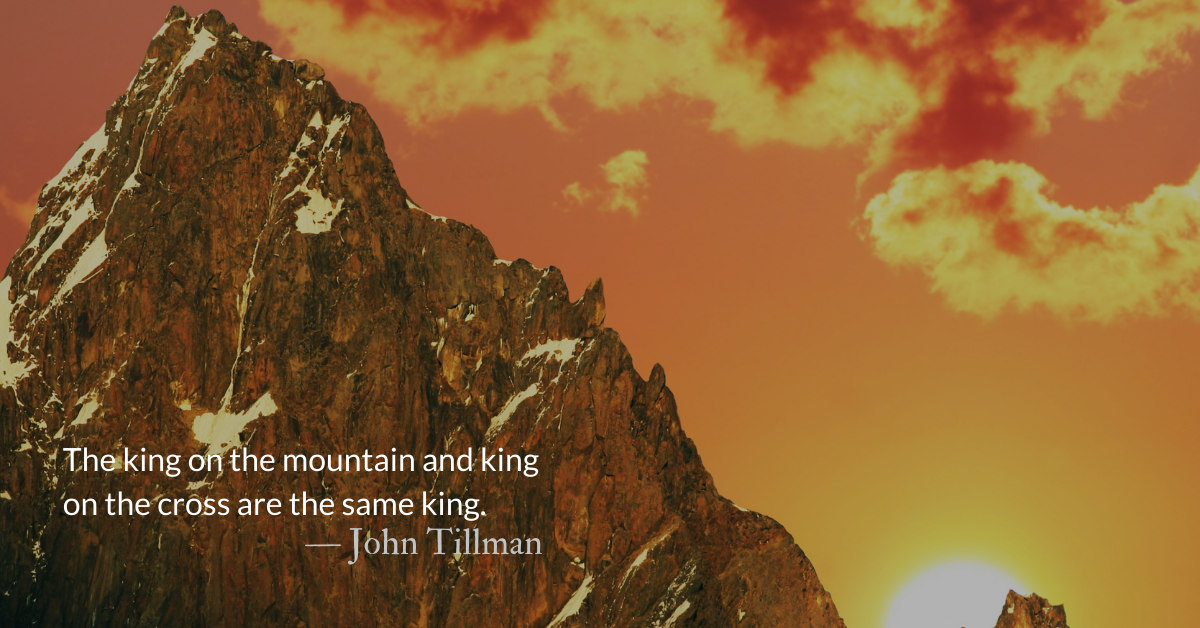 Scripture Focus: Exodus 20.18-23
18 When the people saw the thunder and lightning and heard the trumpet and saw the mountain in smoke, they trembled with fear. They stayed at a distance 19 and said to Moses, “Speak to us yourself and we will listen. But do not have God speak to us or we will die.”
20 Moses said to the people, “Do not be afraid. God has come to test you, so that the fear of God will be with you to keep you from sinning.”
21 The people remained at a distance, while Moses approached the thick darkness where God was.

22 Then the Lord said to Moses, “Tell the Israelites this: ‘You have seen for yourselves that I have spoken to you from heaven: 23 Do not make any gods to be alongside me; do not make for yourselves gods of silver or gods of gold.

Luke 23.38-43
38 There was a written notice above him, which read: this is the king of the jews.
39 One of the criminals who hung there hurled insults at him: “Aren’t you the Messiah? Save yourself and us!”
40 But the other criminal rebuked him. “Don’t you fear God,” he said, “since you are under the same sentence? 41 We are punished justly, for we are getting what our deeds deserve. But this man has done nothing wrong.”
42 Then he said, “Jesus, remember me when you come into your kingdom.”
43 Jesus answered him, “Truly I tell you, today you will be with me in paradise.”

God presents himself to the former slaves as a glorious heavenly king.

There are many linguistic similarities between ancient vassal treaties between kings and subjects and the covenant language given to Moses. God tends to speak to us using language we are familiar with.

Moses calls this a test. Will the people be faithful to this king? Will they trust God? Will they become God’s “firstborn son” that he calls them to become? (Exodus 4.22) The desert experience and hundreds of years of judges and kings would prove that Israel would fail to live up to the covenant until God sent the true “firstborn son” to fulfill the covenant.

When Jesus was on the cross, Pilate wrote “King of the Jews” and placed the sign over Christ’s head. The religious leaders objected to this. They did not want this naked, abused, bleeding man to be called their king. They wanted the intimidating king from the mountain, not the homeless carpenter from Nazareth.

If only their eyes could be opened and ours as well. The king on the mountain and king on the cross are the same king.

The days of peering at God on a distant mountain top are over. Now, Jesus calls us close to his cross that he may save us and take us into his kingdom.

Divine Hours Prayer: A Reading
Jesus taught us, saying: “The sheep that belong to me listen to my voice; I know them and they follow me. I give them eternal life; they will never be lost and no one will ever steal anything from the Father’s hand. The Father and I are as one.” — John 10.27.30

Read more about Beneath the Cross of Jesus
Content to let the world go by,
To know no gain nor loss
My sinful self, my only shame,
My glory all the cross.

Read more about Way of the Cross
Ask the Holy Spirit to help you assess your level of comfort, your level of acceptance of the suffering Christ…