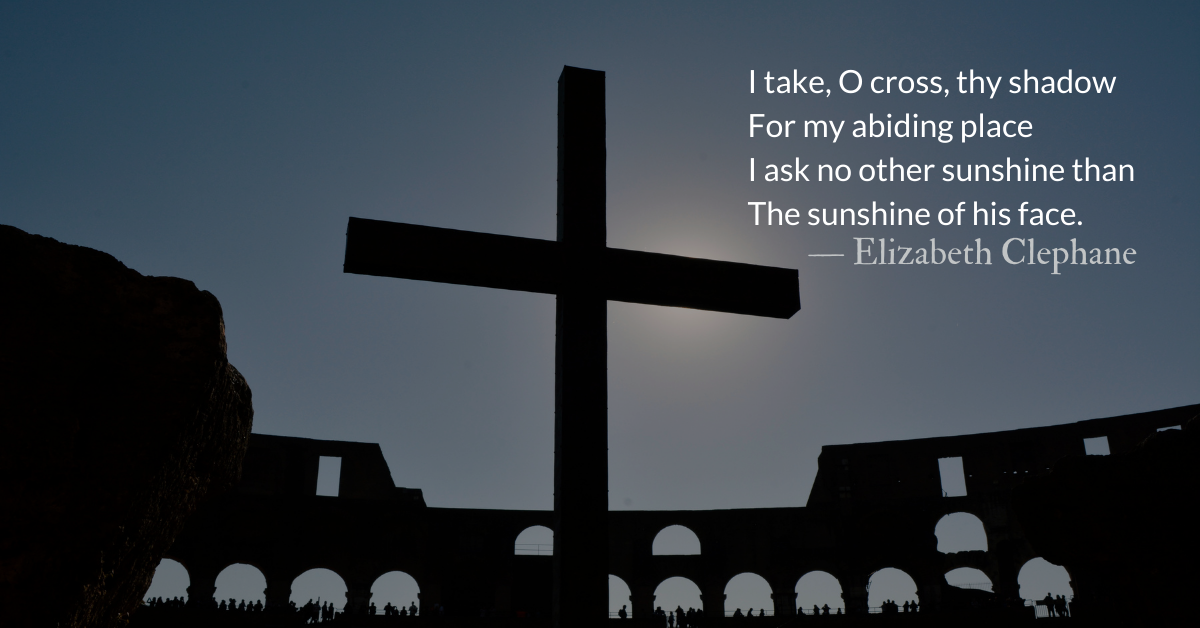 Beneath the Cross of Jesus — Lenten Hymns

Scripture Focus: Luke 15:3-6
3 Then Jesus told them this parable: 4 “Suppose one of you has a hundred sheep and loses one of them. Doesn’t he leave the ninety-nine in the open country and go after the lost sheep until he finds it? 5 And when he finds it, he joyfully puts it on his shoulders 6 and goes home. Then he calls his friends and neighbors together and says, ‘Rejoice with me; I have found my lost sheep.’”

Reflection: Beneath the Cross of Jesus — Lenten Hymns
By Jon Polk

In her childhood, Elizabeth Clephane took a keen interest in poetry. As a teenager, she first revealed some of her own compositions to her sister. She drew from a vivid imagination, utilizing imagery, both biblical and natural, as displayed by one of her familiar compositions, the hymn “Beneath the Cross of Jesus.”

Beneath the cross of Jesus
I fain would take my stand,
The shadow of a mighty rock
Within a weary land

A home within the wilderness,
A rest upon the way,
From the burning of the noontide heat
And the burden of the day.

Using beautiful, comforting images of home and rest to describe the cruel, brutal cross reveals the compassionate heart of this lovely servant of God.

Elizabeth Clephane was born in Edinburgh, Scotland in 1830, daughter of the county sheriff. She was frail and in poor health for most of her life and died at the young age of 38 in the nearby town of Melrose.

Even though frail, she was known to have a cheerful outlook on life and spent most of her short years helping the poor and ailing. Elizabeth and her sister contributed much toward charitable causes to benefit the poor, even going so far as to sell their own carriage and horses to give the proceeds away.

She found meaning in life by giving herself for the sake of others in need, reflecting the light of Christ’s love.

Content to let the world go by,
To know no gain nor loss
My sinful self, my only shame,
My glory all the cross.

In Clephane’s famous narrative poem, “The Ninety and Nine” (later set to music by evangelist Ira Sankey), the compelling reason for her compassion is clear in the retelling of Christ the Shepherd pursuing the one lost sheep. “Lord, whence are those blood drops all the way? They were shed for one who had gone astray.”

The season of Lent reminds us that not only do we find rest in the cruel cross of Jesus, but his sacrifice compels us to give our own lives away for others. The “ninety-nine” may not need our care as much as “the one.”

Elizabeth Clephane made a difference with her brief life by giving it away. Her hymns were mostly published posthumously, with the editor describing them, “Written on the very edge of life, with the better land fully in view of faith, they seem to us footsteps printed on the sands of time, where these sands touch the ocean of eternity.”

Elizabeth was so beloved by the people of her community, the townsfolk gave her the nickname, “the Sunbeam.”

I take, O cross, thy shadow
For my abiding place
I ask no other sunshine than
The sunshine of his face.

Read more from Jon Polk: Come Ye Sinners, Poor and Wretched
Lent purposefully reminds us that we are mere dust, that without the work of Christ and the grace of God, we are all sinners, poor and wretched.