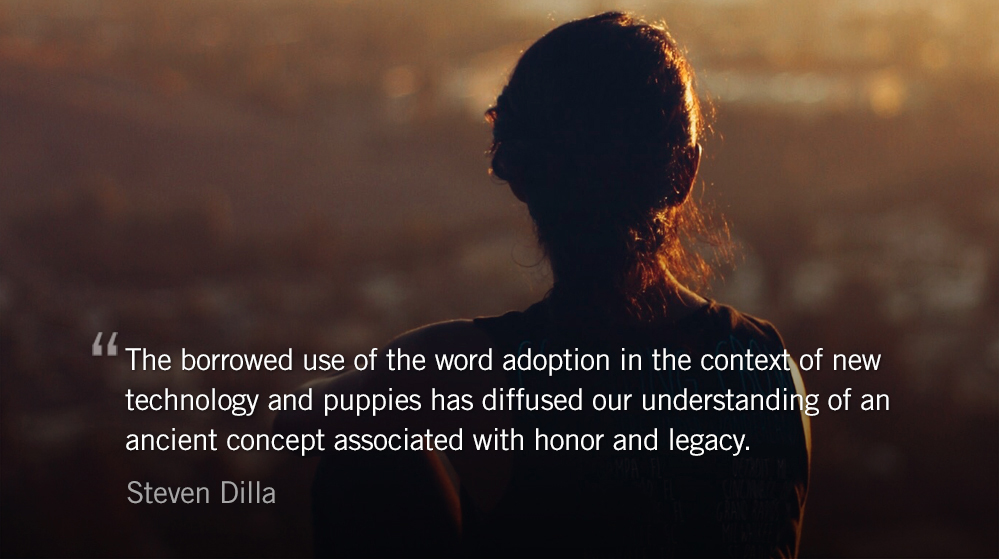 The Spirit of Adoption

Galatians 4.5
[Christ redeemed] those who were under the law, so that we might receive adoption as sons.

The borrowed use of the word adoption in the context of new technology and puppies has diffused our understanding of an ancient concept once associated with honor and legacy. Adoption for the purpose of redefining family and future was common in ancient Rome; records recovered from the ashes of Pompeii reveal nearly one in every ten city senators grew up in adoptive homes.

In Roman adoption the adoptee legally rescinds their past — canceling debts and expunging records — and receives a future defined by the rights, status, and inheritance of their adoptive family.

Adoption ceremonies in Roman Culture began with the adoptive father paying the price for the adoption. The name of this part of the ceremony, mancipatio, shares a root from which we derive the English word emancipation. Because of the price paid in mancipatio, the past no longer held sway over the adoptee’s future.

The adoption ceremony continued with a legal justification for the transference of fatherhood. This presentation placed the adoptee under the rights and record of the new father — including giving the new child full rights to participate in the inheritance. For most adoptees in Roman culture this was a significant step up — so much so the Romans called this part of the ceremony vindicatio — vindication.

The message of the New Testament announces to Christians the price God paid for our adoption. The Holy Spirit, through Paul’s words in the first part of Romans, lays out the legal argument both for our emancipation as well as our vindication and future.

Because of Christ’s work we can rest in the rights, status, and inheritance of our adoptive family. The Scriptures assure us:

The modern cultural desire to imbue consumption (of devices, animals, or otherwise) with the deeper meaning of adoption should not only make us leery of ascribing unnecessary value to the temporal, but point us toward the richness of our lives as adopted sons and daughters of the King.