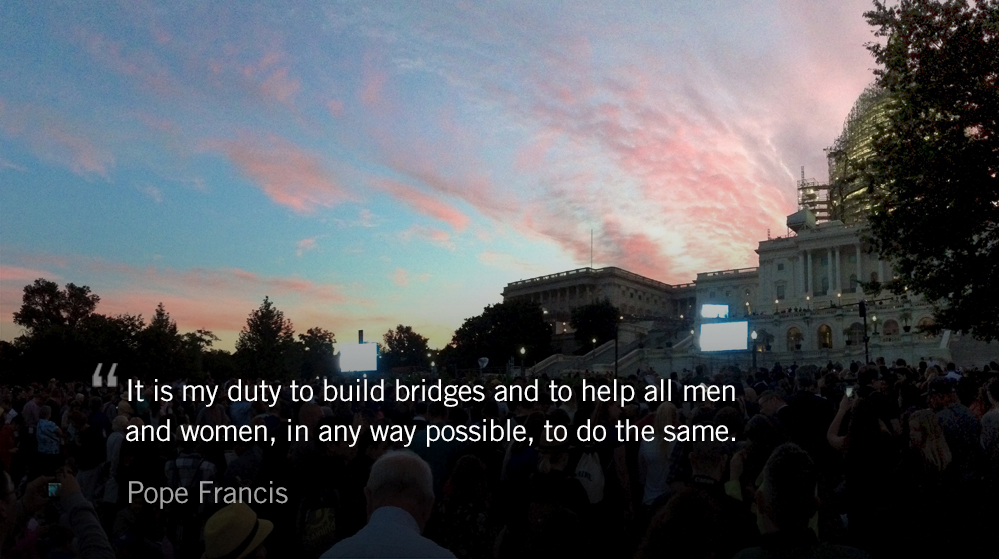 A Vision for the Future :: The Weekend Reading List

I came into the world. Free by nature, in the image of God, I was nevertheless the prisoner of my own violence and my own selfishness, in the image of the world into which I was born. That world was the picture of Hell, full of men like myself, loving God, and yet hating him; born to love him, living instead in fear of hopeless self-contradictory hungers. — Thomas Merton

In his address to a Joint Session of Congress yesterday the Pontiff quoted from Thomas Merton’s autobiography (above), then shared his appreciation for the priest. “Merton was above all a man of prayer, a thinker who challenged the certitudes of his time and opened new horizons for souls and for the Church. He was also a man of dialogue, a promoter of peace between peoples and religions.”

Pope Francis presently enjoys a favorability that rivals that of John Paul II among catholics. He has even garnered the approval of 68% of those who have no religious affiliation, according to Pew Research Center. These numbers are directly linked to his ability to speak to modern issues with boldness and clarity, as he did in Bolivia this past July:

The earth, entire peoples and individual persons are being brutally punished. And behind all this pain, death and destruction there is the stench of what Basil of Caesarea called “the dung of the devil.” An unfettered pursuit of money rules. The service of the common good is left behind.

Once capital becomes an idol and guides people’s decisions, once greed for money presides over the entire socioeconomic system, it ruins society, it condemns and enslaves men and women, it destroys human fraternity, it sets people against one another and, as we clearly see, it even puts at risk our common home. — Pope Francis

Yesterday the Pope opened his speech to Congress by reminding them, “You are asked to protect, by means of the law, the image and likeness fashioned by God on every human face.” The full transcript reads less like an agenda, as his opponents feared, and more like a reminder: the most destructive forces in our world are directly limited, and promoted, by the action (and inaction) of the government of the world’s most powerful nation.

It isn’t exclusively this message that makes Francis unique in his role. In the Pope’s first exclusive interview he was asked, point-blank, “Who is Jorge Mario Bergoglio?” The Jesuit journalist who framed the question, Father Antonio Spadaro, records that “The pope stares at me in silence. I ask him if this is a question that I am allowed to ask…. He nods that it is, and he tells me:”

I do not know what might be the most fitting description…. I am a sinner. This is the most accurate definition. It is not a figure of speech, a literary genre. I am a sinner… I ​​am one who is looked upon by the Lord. I always felt my motto, Miserando atque Eligendo [By Having Mercy and by Choosing Him], was very true for me. — Pope Francis

In this we see a glimpse of a new kind of Pope. Perhaps someone who will not only represent Christian interests among world leaders, but someone standing with the poor, marginalized, and oppressed. (After exiting the Capitol yesterday the Pope went directly to a tent outside to eat with those who are homeless.) Could it be approval ratings change when people see a leader who chooses to leverage power rather than bask in it?

In the words selected from Thomas Merton’s biography: prayer, thinking, challenge, new horizons, and dialogue — we see both Pope Francis’ way of understanding the faithful of the past as well as the framework by which he crafts his own future.