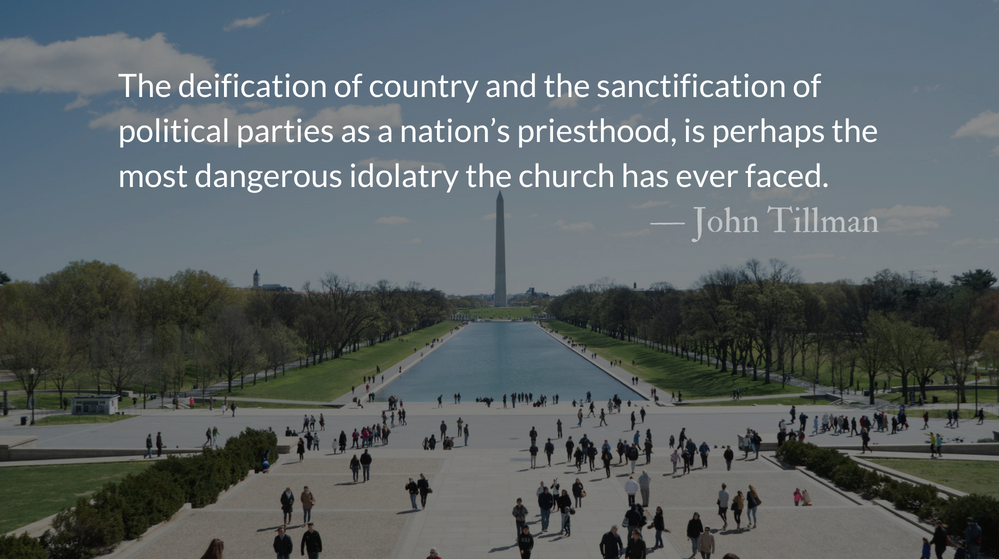 The Seductive Idolatry of Politics

Scripture: Revelation 7.9-10
After this I looked, and there before me was a great multitude that no one could count, from every nation, tribe, people and language, standing before the throne and before the Lamb. They were wearing white robes and were holding palm branches in their hands. And they cried out in a loud voice:

“Salvation belongs to our God,
who sits on the throne,
and to the Lamb.”

Reflection: The Seductive Idolatry of Politics
By John Tillman

Politics is the idol we bring with us to church just as the Israelites worshiped Baal alongside Jehovah. Israel continued this practice until eventually, altars to Baal were set up in God’s temple supplanting true worship.

Politics is the most powerful new religion of this millennium. It continually plays on the kind of imagery we see in Revelation. But outside of Christ there will never be a day when every nation, tribe, people, and language are united. Politics promises this unity and diversity but instead gains its power from fear and division.

This religion of politics poses a greater threat to the gospel than any other religion. Politics provides everything that the darkest parts of humanity’s sinful nature want from a religion.

The State is a flawed deity that is unpredictably beneficent or wrathful. Pagan societies prefer their gods to be flawed.

Politicians and the media (which serves them) provide an ecclesiastically complex structure of priests and prophets. Schisms, conspiracies, and scandals aren’t bugs in the system; they are features.

Worshipers make ordinances of their favorite political shows, podcasts, and news sites. They attend these programs with far more regularity and commitment than they do church worship services.

They make sacrifices of time and money and perform public shows of support. They promulgate their ideology and police their relationships, disassociating with any who would blaspheme their viewpoints.

Unfriending the blasphemers is viewed as a holy, cleansing action that makes the worshiper a more pure follower and condemns the one unfriended.

The deification of country and the sanctification of political parties as a nation’s priesthood, is perhaps the most dangerous idolatry the church has ever faced. It is a serious error to conflate the identity of God’s heavenly kingdom with any earthly government. It is so easy for earnest believers to fall into this trap.

This doesn’t mean it’s un-Christian to be “political.” Quite the opposite. But we must make sure we are pursuing actions that please Christ rather than pleasing human political kingdoms.

We serve the same kingdom Christ testified to before Pilate put him to death and the kingdom Stephen saw before being stoned by the Sanhedrin.

The Lamb on the Throne is unconcerned with political expediency. When forced to choose between country, or party, and Christ, we must choose Christ.

Prayer: The Greeting
Out of Zion, perfect in its beauty, God reveals himself in glory. Let the heavens declare the rightness of his cause; for God himself is judge. — Psalm 50.2, 6

Read more about God’s Kingdom Versus God’s Reign
As Christians today, we are often tempted, as the Israelites were, to put faith in shaping society through the exertion of governmental power.