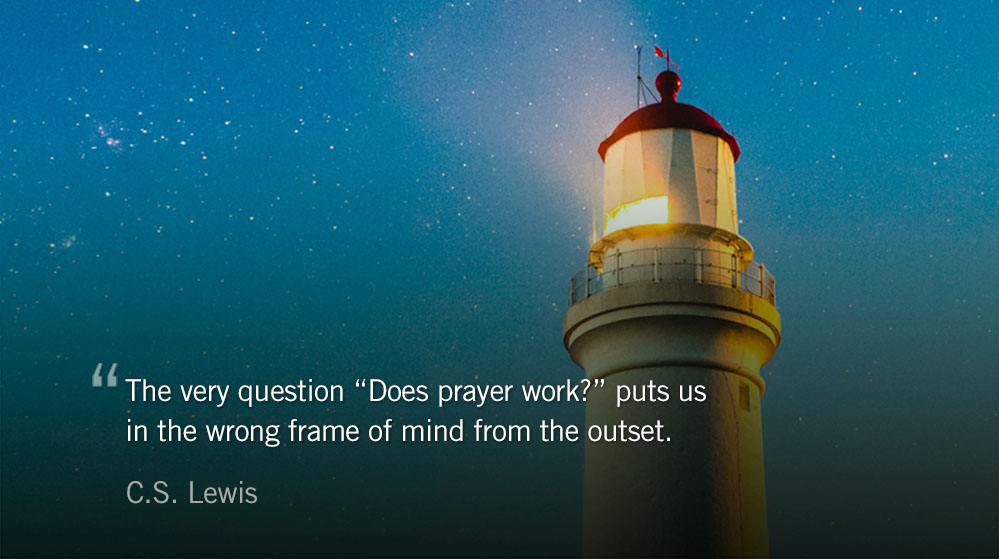 The Efficacy of Prayer

For infinite wisdom does not need telling what is best, and infinite goodness needs no urging to do it.

In my distress I called to the Lord, and he answered me.

The thing we pray for may happen, but how can you ever know it was not going to happen anyway? Even if the thing were indisputably miraculous it would not follow that the miracle had occurred because of your prayers.

If an infinitely wise Being listens to the requests of finite and foolish creatures, of course He will sometimes grant and sometimes refuse them. Invariable “success” in prayer would not prove the Christian doctrine of prayer at all. It would prove something much more like magic—a power in certain human beings to control, or compel, the course of nature.

The very question “Does prayer work?” puts us in the wrong frame of mind from the outset.

“Work”: as if it were magic, or a machine—something that functions automatically. Prayer is either a sheer illusion or a personal contact between embryonic, incomplete persons (ourselves) and the utterly concrete Person.

Prayer in the sense of petition, asking for things, is a small part of it; confession and penitence are its threshold, adoration its sanctuary, the presence and vision and enjoyment of God its bread and wine. In it God shows Himself to us. That He answers prayers is a corollary—not necessarily the most important one—from that revelation. What He does is learned from what He is.

Petitionary prayer is, nonetheless, both allowed and commanded to us: “Give us our daily bread.” And no doubt it raises a theoretical problem. Can we believe that God ever really modifies His action in response to the suggestions of men?

It is not really strange, that my prayers should affect the course of events than that my other actions should do so. They have not advised or changed God’s mind—that is, His over-all purpose. But that purpose will be realized in different ways according to the actions, including the prayers, of His creatures.

Prayer is not a machine. It is not magic. It is not advice offered to God. If our prayers are sometimes granted, beyond all hope and probability, we had better not draw hasty conclusions to our own advantage. If we were stronger, we might be less tenderly treated. If we were braver, we might be sent, with far less help, to defend far more desperate posts in the great battle.

— Excerpt from C.S. Lewis’ (wonderful essay) The Efficacy of Prayer.

Behold, God is my helper; it is the Lord who sustains my life. —Psalm 54:4