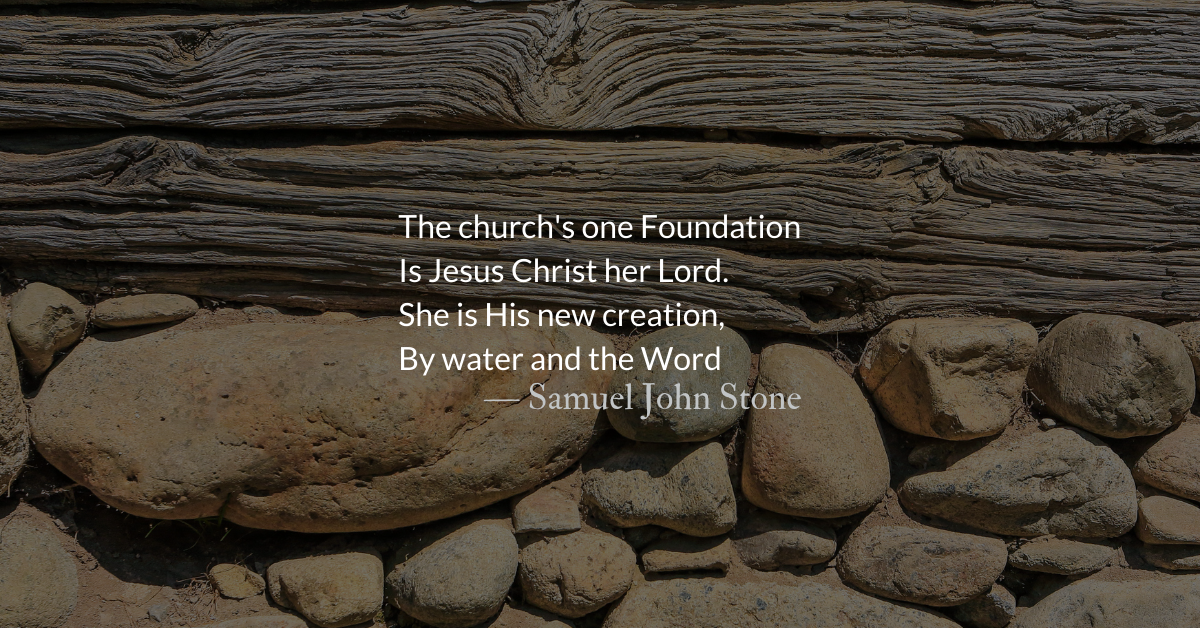 The Church’s One Foundation — Lenten Hymns

Scripture Focus: John 5:24-27
24 “Very truly I tell you, whoever hears my word and believes him who sent me has eternal life and will not be judged but has crossed over from death to life. 25 Very truly I tell you, a time is coming and has now come when the dead will hear the voice of the Son of God and those who hear will live. 26 For as the Father has life in himself, so he has granted the Son also to have life in himself. 27 And he has given him authority to judge because he is the Son of Man.

1 Corinthians 3:11
For no one can lay any foundation other than the one already laid, which is Jesus Christ.

Reflection: The Church’s One Foundation — Lenten Hymns
By Jon Polk

No, not a reference to today’s headlines, but to a schism in the Church of England in the 1860s. Popular Bishop John William Colenso of Natal, South Africa raised the ire of many of his colleagues with controversial theological stances.

Colenso faced criticism shortly after his appointment, when he allowed polygamists to be baptized by the church without requiring them to divorce their multiple wives. Later, his writings and views on the authorship and historicity of some Old Testament books elicited protest from his more orthodox contemporaries.

The most vocal opposition came from another South African Bishop, Robert Gray of Cape Town. Gray went so far as to appeal to have Colenso removed from his post and even excommunicated. Colenso was removed but later reinstated by a judicial committee, which lead to a split in the South African church.

Meanwhile, in Oxford, England, Samuel John Stone was a young minister serving in a poor parish. Concerned by the division in the church in South Africa, Stone also recognized that his own congregants did not possess a full understanding of the basic tenets of their faith.

Inspired by a desire to bring clarity and unity, Stone wrote Lyra Fidelium: Twelve Hymns on the Twelve Articles of the Apostles’ Creed. Included in this collection was the hymn, “The Church’s One Foundation,” which references the church in South Africa.

Though with a scornful wonder
Men see her sore oppressed,
By schisms rent asunder,
By heresies distressed.

“The Church’s One Foundation” is Stone’s attempt to expound upon article nine of the Apostle’s Creed, “I believe in the Holy Catholic (i.e. universal) Church, the communion of saints.”

As the hymn proclaims, the Church is founded upon Jesus Christ and him alone. The Church was inaugurated by the blood sacrifice and ultimate resurrection of Jesus. The Church is of Christ, for Christ, and belongs to Christ.

The season of Lent is an opportunity for the Church and for all Christians to examine our allegiances. To whom do we owe our existence? To whom do we give our loyalty?

The Church’s witness has been compromised by our misguided devotion to personalities, politics, and pariahs. To be a faithful voice of truth and love in the world, we must recover our singular dedication to Jesus Christ. We must return to our one true foundation.

The church’s one Foundation
Is Jesus Christ her Lord.
She is His new creation,
By water and the Word.
From heaven He came and sought her
To be His holy bride.
With His own blood He bought her,
And for her life He died.

Read more about There is a Fountain Filled with Blood
The dying thief rejoiced to see
That fountain in his day;
And there may I, though as vile as he,
Wash all my sins away.