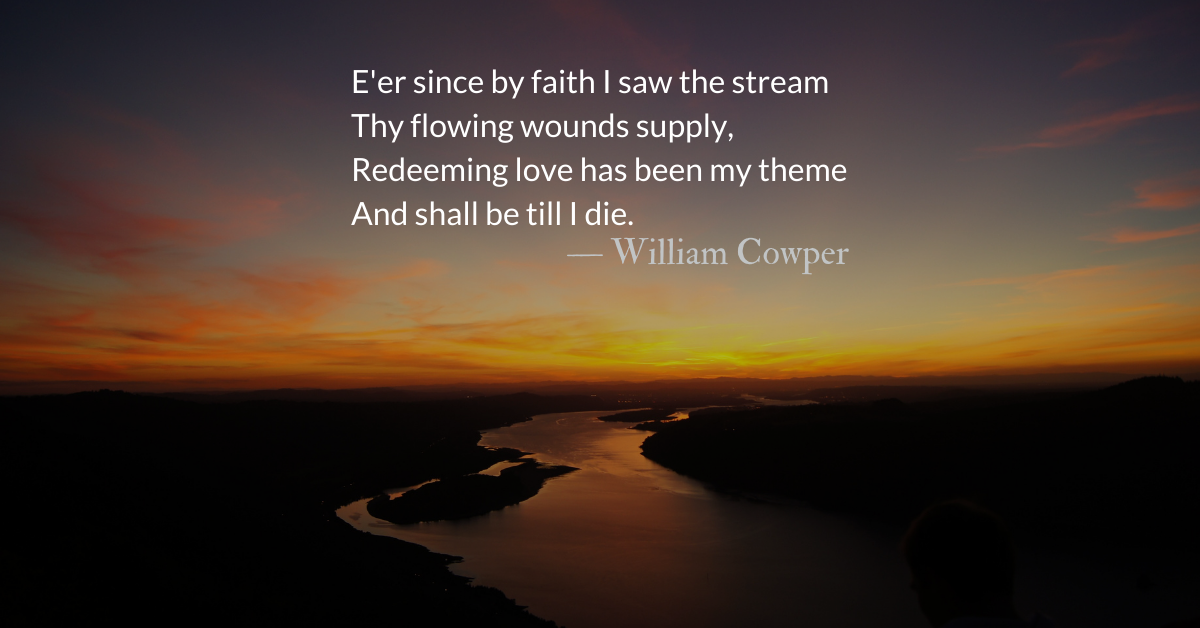 There is a Fountain Filled with Blood — Lenten Hymns

Scripture Focus: Luke 22:39-44
39 Jesus went out as usual to the Mount of Olives, and his disciples followed him. 40 On reaching the place, he said to them, “Pray that you will not fall into temptation.” 41 He withdrew about a stone’s throw beyond them, knelt down and prayed, 42 “Father, if you are willing, take this cup from me; yet not my will, but yours be done.” 43 An angel from heaven appeared to him and strengthened him. 44 And being in anguish, he prayed more earnestly, and his sweat was like drops of blood falling to the ground.

Zechariah 13:1
On that day a fountain will be opened to the house of David and the inhabitants of Jerusalem, to cleanse them from sin and impurity.

Reflection: There is a Fountain Filled with Blood — Lenten Hymns
By Jon Polk

The hymn, “There is a Fountain Filled with Blood,” can be difficult to sing. Not because of a challenging rhythm or melody, but because of vivid and gratuitous language. This hymn would likely receive a PG-13 rating for violent content.

William Cowper (pronounced “Cooper”), born in England in 1731, wrote “There is a Fountain” after a significant period of depression, something he battled all his life.

Cowper’s mother died in childbirth when he was six. He and his brother were the only two out of seven siblings to survive past infancy. His mother’s death affected him significantly and began his life-long battle with mental illness.

Cowper attended Westminster, where he took an interest in writing poetry. However, after graduation, he became apprenticed to an attorney, but never practiced law.

This led to an offer of a clerkship in the House of Lords, but Cowper suffered a mental breakdown due to the stress of the interview. After attempting to take his own life, he was admitted to St. Alban’s Hospital. He was treated by a Christian therapist who encouraged him to read the Bible. In so doing, Cowper began to find peace of mind and recovered after eighteen months.

There is a fountain filled with blood
Drawn from Immanuel’s veins,
And sinners plunged beneath that flood
Lose all their guilty stains.

The dying thief rejoiced to see
That fountain in his day;
And there may I, though as vile as he,
Wash all my sins away.

Upon release from St. Alban’s, Cowper moved in with a retired clergyman who introduced him to minister and hymn writer, John Newton. Newton invited Cowper to assist with pastoral duties and encouraged him to contribute to a hymnbook. Cowper wrote sixty-eight hymns for the collection, including “There is a Fountain” and he flourished under Newton’s care.

The season of Lent reminds us that when we are at our lowest of lows, Jesus extends his hand to rescue us. He has been there. He has sweat blood in a moment of distress and agony. He has shed blood in the ultimate sacrifice for our rescue and redemption.

William Cowper became a successful hymn writer and renowned secular poet. However, he was a troubled soul most of his life. The death of his brother and several close friends agitated his depression. Cowper claimed God protected him from taking his own life on several occasions.

While the hymn’s imagery may be violent and difficult, so too are the pressures and tragedies we face in life. Our faith in the Fountain redeems even our most tragic wounds.

E’er since by faith I saw the stream
Thy flowing wounds supply,
Redeeming love has been my theme
And shall be till I die.

Music: There is a Fountain by Russ Taff
Lyrics: “Praise for the Fountain Opened” (original title) – from Hymnary.org

Divine Hours Prayer: The Refrain for the Morning Lessons
“Because the needy are oppressed, and the poor cry out in misery, I will rise up,” says the Lord, “And give them the help they long for.” — Psalm 12.5

Read more about Treatment of Mercy
May we seek to treat the mentally ill medically, spiritually, and relationally, as we support them within our communities as treasured ones, loved by Christ.

Read more about Discipline for the Anxious

The psalmist writes of being “too troubled to speak,” yet he cries to God. He writes of insomnia, yet he rests in God.