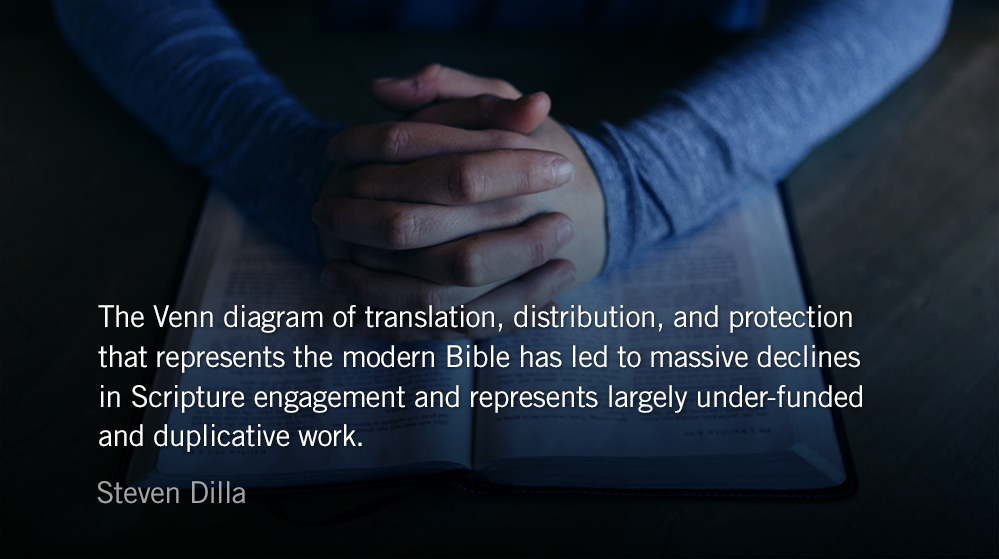 The single printed copy of the Bible I own sits in a closet and has not been opened in over half a decade. This has, I believe, less to do with my devotion—I regularly engage with Scripture, write this devotional, hold a degree in theology, and read in Greek and Hebrew—and more to do with my age and culture. I’m in my mid-thirties and access nearly everything on my smartphone—regularly engaging with apps and sites like NeuBible, Bible Gateway, Logos, and YouVersion.

Last week Crossway Publishers issued the final revision of their popular translation, the English Standard Version. The publisher noted the text, which was first translated nearly two-decades ago, would now remain, “unchanged forever, in perpetuity.” Though if my reading habits—and those of a significant majority in my generation—are a sign, there are significant changes coming.

Scripture has undergone six major transitions throughout time. In the first transition, much of the early sacred text moved from oral tradition to written (early Hebrew was one of the first few written languages in human history). Centuries later, that written text was canonized.

The canonized text was then illuminated—adding imagery and ornamentation to language. (The impact of this third transition on a pre-literate culture cannot be understated—for the first time ever the masses could access the word of God—even today the artwork is among some of our most celebrated ancient works).

Then translation began to gain significant steam, followed by Gutenberg’s press. These fifth and sixth transitions were so earth-changing they are still the dominant paradigm for modern Bible societies, missionary movements, and even apps on our phones.

The sixth transition was the shift from largely open-text to copyrighted text—something that has only occurred in the last couple hundred years as Christianity and capitalism merged in the west. The most recent lawsuit to protect the “intellectual property” of Bible translations was finalized in April of 2016 by the Evangelical Christian Publishers Association—which, according to their own press release celebrating the victory, is a conglomerate “of nearly 200 member companies worldwide, representing a combined revenue of nearly $1.4 billion.”

The Venn diagram of translation, distribution, and protection that represents the modern Bible has led to massive declines in Scripture engagement and represents largely under-funded and duplicative work. Facebook and Google are in an arms race to accomplish the world-wide distribution of information, and the later organization’s machine translation project will not be deemed successful until it can accurately render text in every language.

Protection of Scripture’s translations—and litigation when the Bible has spread without profit—have created a world where more versions are available while less people are reading and legally able to spread the word of God than ever before.

It is time for Scripture’s seventh major transition.

This transition won’t be led by corporations hungry to make up the lost revenue of declining print Bible sales, or even by the clergy; it will be led by the people—by those faithfully practicing their faith, by those hacking new technologies for the Kingdom, and by those who want Scripture to find its place in our new world.

The seventh transition for the Scriptures will be that of integration. Litigation will be replaced by Creative Commons licensing and open-source translation. Translation and distribution will be accomplished through the tools and platforms of world’s largest tech companies. But what will interest the next generation in Scripture most will be how well this generation—you and I—integrate it into our life, vocation, and community.

It could be said that this was always the goal—but we must admit it has not been the focus of the Bible movement of the last century. As we look toward the future, integration into modern life requires technology, but it also pre-supposes community. It demands open governance from those in the business of holding copyrights on sacred text. Most of all, it depends on the faithful to look at the Scriptures not as a book that sits on a shelf, but as a living and active Word that shapes, corrects, and instructs our daily lives.