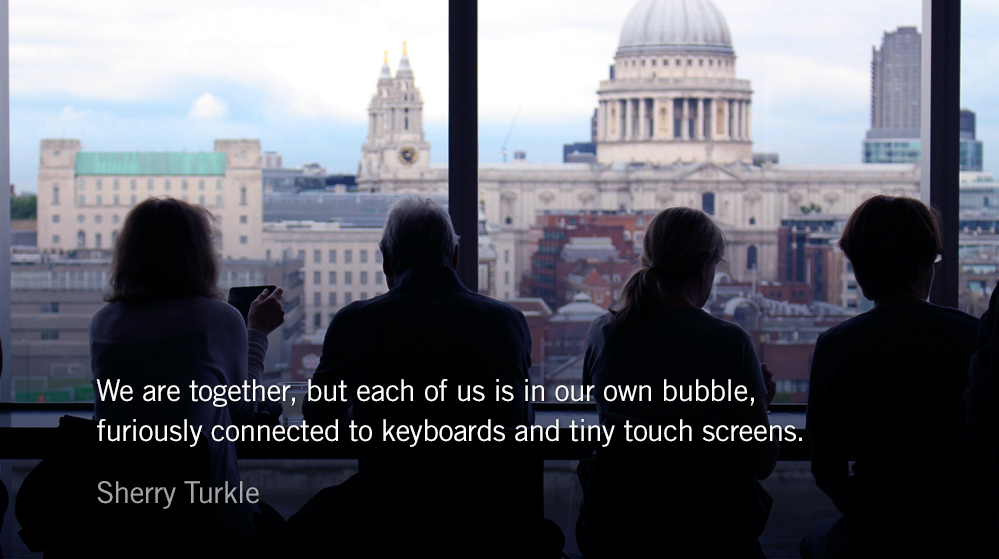 The average person checks their phone 85 times a day. That’s 26% more often than the average amount of notifications (63.5) people receive daily. This type of perpetual connection has rewired conversation. “We are together, but each of us is in our own bubble, furiously connected to keyboards and tiny touch screens,” remarks Sherry Turkle.

In The Flight From Conversation, Turkle acknowledges, “We are tempted to think that our little ‘sips’ of online connection add up to a big gulp of real conversation.“ Turkle, a researcher at M.I.T., continues:

Human relationships are rich; they’re messy and demanding. We have learned the habit of cleaning them up with technology. And the move from conversation to connection is part of this. But it’s a process in which we shortchange ourselves. Worse, it seems that over time we stop caring, we forget that there is a difference.

Personal screens rewrite the world—holding users, in a glowing spotlight, as both the most powerful and important subject. C.S. Lewis, though he could not have specifically addressed smartphones or social networking, foreshadows some of what’s happening today when he writes, “Man surrenders object after object, and finally himself, to Nature in return for power,” in The Abolition of Man.

There is something which unites magic and applied science while separating both from the wisdom of earlier ages. For the wise men of old the cardinal problem had been how to conform the soul to reality, and the solution had been knowledge, self-discipline, and virtue. For magic and applied science alike the problem is how to subdue reality to the wishes of men: the solution is a technique.

Though technology will serve in ever-increasing roles in daily faith, we cannot look to it as a replacement of the flesh, tears, laughter, sacrifice, forgiveness, and beauty of the face-to-face community of the Church. This may be more difficult than we imagine, Turkle concludes:

We expect more from technology and less from one another and seem increasingly drawn to technologies that provide the illusion of companionship without the demands of relationship. Always-on/always-on-you devices provide three powerful fantasies: that we will always be heard; that we can put our attention wherever we want it to be; and that we never have to be alone.