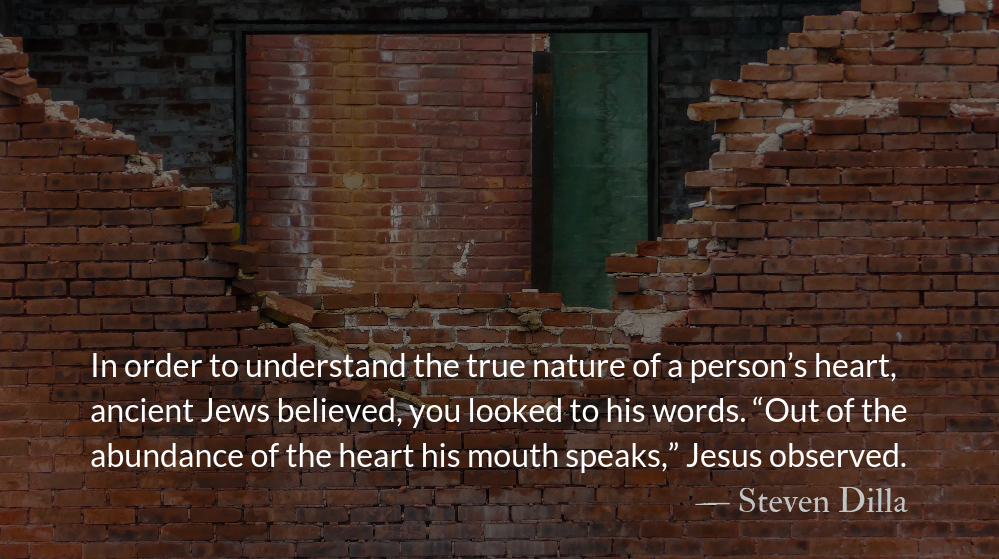 Hosea 7.3
They delight the king with their wickedness,
the princes with their lies.

In order to understand the true nature of a person’s heart, ancient Jews believed, you looked to his words. “Out of the abundance of the heart his mouth speaks,” Jesus observed. It was a belief widely held in the ancient world; centuries later the Babylonian Talmud imagined a conversation between God and a man’s words:

Though the tongue may recline, it is rarely at rest. ”Lips are soft; but when they are ‘lying’ lips they suck away the life of character and are as murderous as razors,” Charles Haddon Spurgeon remarks:

Lips should never be red with the blood of honest men’s reputes, nor salved with malicious falsehoods. The faculty of speech becomes a curse when it is degraded into a mean weapon for smiting men behind their backs. Those who fawn and flatter, too, and all the while have enmity in their hearts, are horrible beings; they are the seed of the devil, and he works in them after his own deceptive nature.

The authors of Scripture react viscerally to malicious and deceptive words, Spurgeon explains, because they are the language of sin:

The Psalmist seems lost to suggest a fitting punishment. It is the worst of offenses—this detraction, calumny, and slander. Judgment sharp and crushing would be measured out to it if men were visited for their transgressions. But what punishment could be heavy enough?

And though Christ absorbed the eternal burden of sin, each broken action has repercussions in our daily lives. The Talmud compares the effects of gossip and hateful speech to one of the most destructive diseases of their day:

The Hebrew for the words “I will destroy” and “in perpetuity” are both derived from one and the same root. Hence… the punishment of destruction will take the form of [leprosy].

Leprosy results in a person’s total disconnection from their community. The outside rots because the inside is incurably ill. Yet the promise of Scripture is that—through Christ—all are healed, all are made new, all are redeemed.

Prayer: The Refrain for the Morning Lessons
Let all the earth fear the Lord; let all who dwell in the world stand in awe of him. — Psalm 33.8

Additional Reading
Read More about Resisting in Faith
Daniel resists by doing something only a person of faith can do. He resists by serving unconditionally. He resists by helping. He resists by taking action to save the lives of men who will eventually turn against him and conspire to throw him in a pit of lions.

Read More about Christian Civility
Two years ago Steven wondered how powerful it would be if the Church took the lead in restoring public civility. We are still wondering what that would look like…