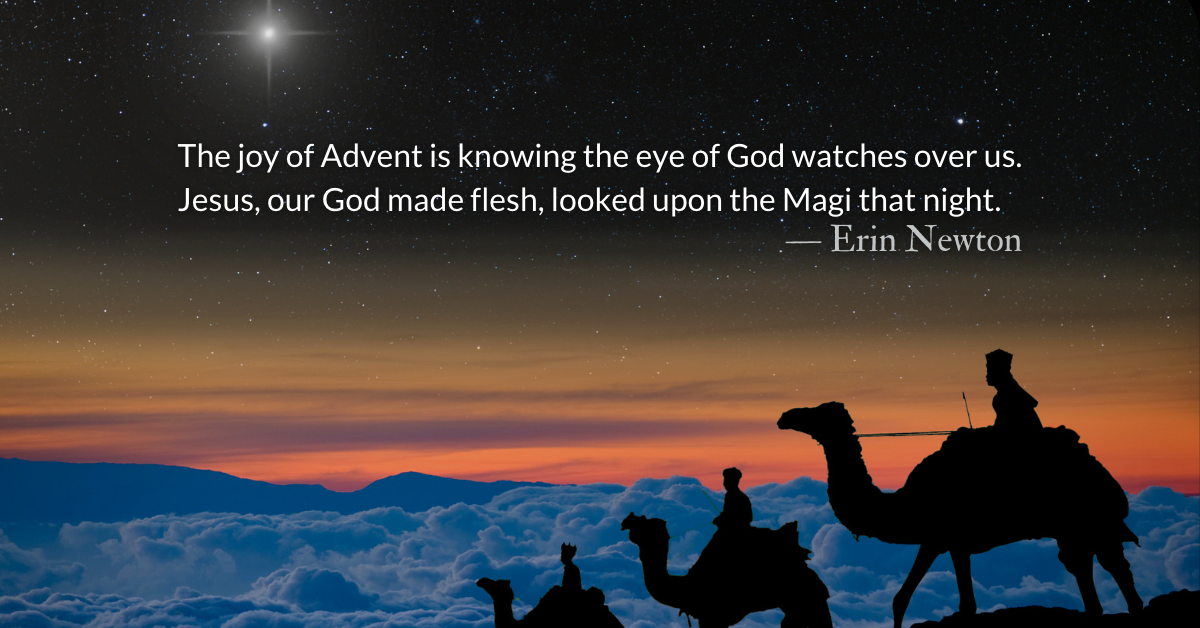 Peril and Joy — Joy of Advent

Scripture Focus: Ezra 5:5
5 But the eye of their God was watching over the elders of the Jews, and they were not stopped until a report could go to Darius and his written reply be received.

Matthew 2:10-12
10 When they saw the star, they were overjoyed. 11 On coming to the house, they saw the child with his mother Mary, and they bowed down and worshiped him. Then they opened their treasures and presented him with gifts of gold, frankincense and myrrh. 12 And having been warned in a dream not to go back to Herod, they returned to their country by another route.

Reflection: Peril and Joy — Joy of Advent
By Erin Newton

The foundations of the temple were laid, and a mix of joy and grief resided over the people. As soon as they set out to do the work of God, they were met with resistance. Enemies of Judah and Benjamin bribed officials to frustrate their plans (Ezra 4.4-5). They accused the Israelites of dishonoring King Artaxerxes (Ezra 4.14). The work was stalled. But God would not be hindered.

Haggai and Zechariah, two prophets, called the people to return to their work. Despite the support from the prophets, they were met with more resistance. A local governor questioned their right to rebuild. Eager to bring punishment, he took names. But the eye of their God was watching over them.

The work of God can be dangerous. It can be unpopular. Motives can be questioned. Efforts can be confounded.

When the Magi came to visit Jesus, they were filled with the joy of his advent. Joy brimmed over. Overjoyed, they were face to face with God. They worshiped Jesus and offered their gifts. But the eye of God was watching over them. They were warned in a dream not to return to Herod. Herod, enraged with power and jealousy, soon called for the murder of every infant boy in Bethlehem.

But the eye of God was watching over them. Another warning was given and Joseph and Mary fled with infant Jesus to Egypt.

The Magi could have returned to Herod and faced his interrogation. Mary and Joseph could have stayed in Bethlehem and faced the executioner. The Israelites were face to face with authorities who wanted to stop the temple rebuilding and didn’t hesitate to take names.

The road to worshiping God can be dangerous. Being faithful to God’s call is like following a path with hills and valleys and perils. Our brothers and sisters around the world face greater threats than some of us will ever know. All because they seek to worship God.

As we reflect upon Advent this year, consider how he watches over us. “The Lord will watch over your coming and going both now and forevermore” (Psalm 121.8).

Divine Hours Prayer: The Greeting
My lips will sing with joy when I play to you, and so will my soul, which you have redeemed. — Psalm 71.23

Read more about The Exodus and The Return
The testimony of Ezra tells us that kings come and go, but it is the Lord who is our only hope and protector.