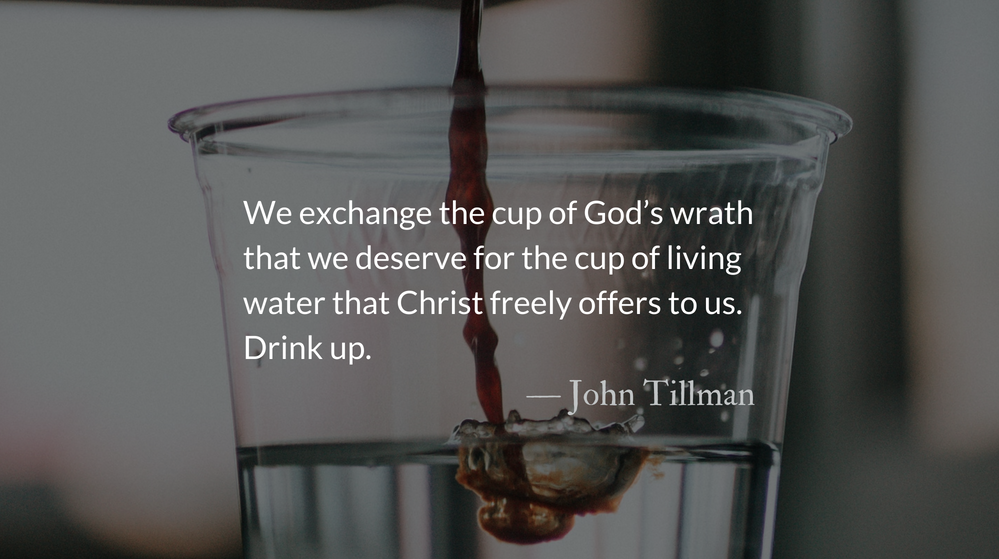 Scripture: Isaiah 51.22
See, I have taken out of your hand
the cup that made you stagger;
from that cup, the goblet of my wrath,
you will never drink again.

Scripture: Revelation 21.6
…To the thirsty I will give water without cost from the spring of the water of life.

When it comes to divine wrath, scripture often portrays it as a liquid.

Noah’s deadly flood. Jeremiah’s boiling pot. John’s bowls of God’s wrath. The intoxicating cup to be drunk that Job, Isaiah, Jeremiah, and John describe. Even the eternal destination of those under God’s wrath is a lake of fire.

God’s liquid wrath flows from his love for the victims of injustice. It is fueled not by simplistic destructive retribution, but redemptive restoration.

This is what separates the Christian concept of God from that of pagans. A pagan God is always angry, and is only benevolent when placated with bloody destruction.

The Christian God is always loving, and is only wrathful at the abuse of his creation. But our God goes further than that. The God of the Bible does not demand sacrifice from his followers. He provides it on their behalf.

The forgiveness of our sins is accomplished by the sacrifice of Christ’s blood. A liquid sacrifice, flowing from love. The cup of God’s wrath is taken for us by Christ. He begs not to drink it, and yet he does. Leaving us not a drop to taste after him.

It is this sacrifice that makes it possible for Christ to say in Revelation 21, “It is done. I am the Alpha and the Omega, the Beginning and the End. To the thirsty I will give water without cost from the spring of the water of life.”

We exchange the cup of God’s wrath that we deserve for the cup of living water that Christ freely offers to us. That is liquid wrath and liquid forgiveness. That is heaven in two cups. That is the gospel. Drink up.

Prayer: The Refrain for the Morning Lessons
Those who are planted in the house of the Lord shall flourish in the courts of our God. — Psalm 92.12

Additional Reading
Read More about Degrading Each Other
“You have done it unto me.”
Whether we help or harm others, Jesus steps into the interaction.

Read More about The Loving Wrath of God
God is not, by unleashing his wrath on sin, contradicting his love for humankind, but fulfilling it.