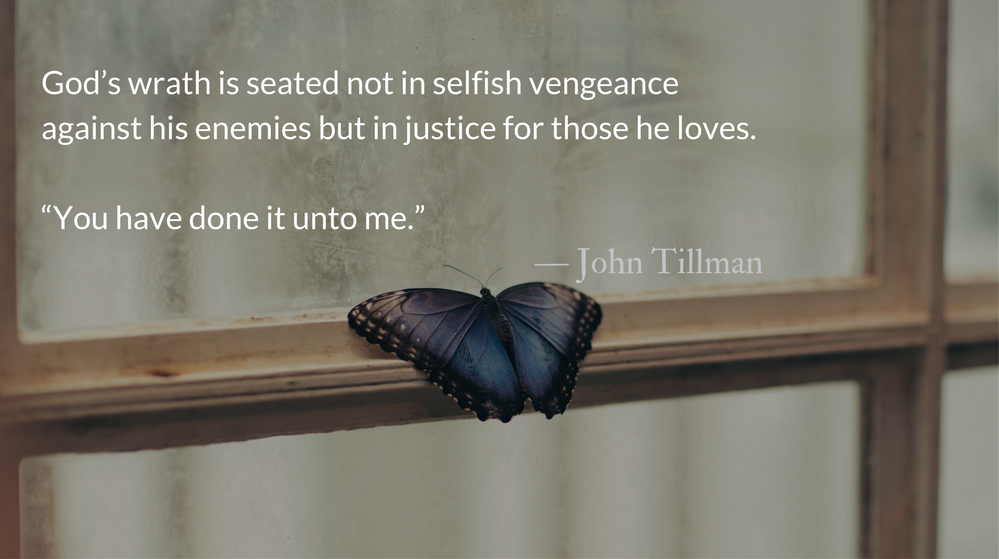 Scripture: Romans 1.24
Therefore God gave them over in the sinful desires of their hearts to sexual impurity for the degrading of their bodies with one another.

Reflection: Degrading Each Other
By John Tillman

God’s wrath is often framed as a response to offenses committed by men and women against God. In this framing, God is the one harmed and the one seeking vengeance. Moderns contemplating this view have a hard time reconciling it. God seems selfish, vindictive, petty, and small.

We can’t reach God to harm him and sin against him, so instead we attack God through harming and degrading others made in his image. God’s wrath is seated not in selfish vengeance against his enemies but in justice for those he loves.

“You have done it unto me.”

Whether we help or harm others, Jesus steps into the interaction. He places himself into the bodies and the pain and the suffering of the people we harm every day—whether directly, indirectly, by our actions, or by our inactions. It is a shocking claim.

As the #MeToo movement sweeps around the world, Jesus stands with the victims, claiming their pain as his own, identifying with their feelings of powerlessness, of isolation, and of being silenced for so long.

Christianity teaches that no matter what our lusts are, they are not outside of our control. Sexual behavior is under the control of our will and, therefore, regardless of state of mind, location, previous behavior, the influence of alcohol or drugs, or even the state of dress of another person, we are responsible that we not “wrong or take advantage of a brother or sister” in this matter.

No environment, from Hollywood offices to the sanctuaries of our churches is untouched by the culture of degrading sexual manipulation and abuse. Christians have an opportunity to drop partisan loyalty, abandon “what-aboutism,” and step into this cultural problem with the perspective of the Gospel.

Christians can uniquely offer condemnation for abusive actions and the systems which allowed them, while offering compassion and protection for victims, and even forgiveness and redemption (though not necessarily reinstatement) for perpetrators.

The Morning Psalm
May god be merciful to us and bless us, show us the light of his countenance and come to us. — Psalm 67.1