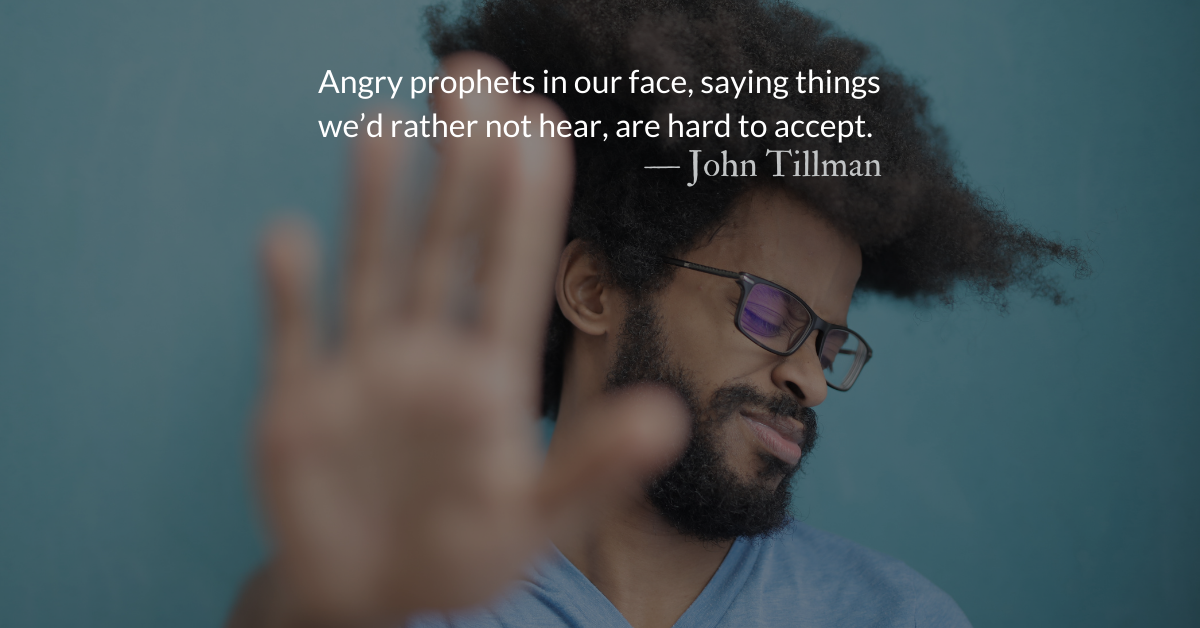 Scripture Focus: Amos 7.10-17
10 Then Amaziah the priest of Bethel sent a message to Jeroboam king of Israel: “Amos is raising a conspiracy against you in the very heart of Israel. The land cannot bear all his words. 11 For this is what Amos is saying:

“‘Jeroboam will die by the sword,
and Israel will surely go into exile,
away from their native land.’”

12 Then Amaziah said to Amos, “Get out, you seer! Go back to the land of Judah. Earn your bread there and do your prophesying there. 13 Don’t prophesy anymore at Bethel, because this is the king’s sanctuary and the temple of the kingdom.”

14 Amos answered Amaziah, “I was neither a prophet nor the son of a prophet, but I was a shepherd, and I also took care of sycamore-fig trees. 15 But the LORD took me from tending the flock and said to me, ‘Go, prophesy to my people Israel.’ 16 Now then, hear the word of the LORD. You say,

“‘Do not prophesy against Israel,
and stop preaching against the descendants of Isaac.’

17 “Therefore this is what the LORD says:

“‘Your wife will become a prostitute in the city,
and your sons and daughters will fall by the sword.
Your land will be measured and divided up,
and you yourself will die in a pagan country.
And Israel will surely go into exile,
away from their native land.’ ”

When a prophet’s name is in bold print as the title of the book, it is easy to take their side. However, angry prophets in our face, saying things we’d rather not hear, are hard to accept.

There were many reasons for Amaziah to reject Amos. One reason was religious animosity. Amos was from Judah and Amaziah was the high priest at Bethel in Israel. Israel’s religious leaders lacked the spiritual authority of the Levitical priesthood and did not have the benefits of the grand temple of Jerusalem. They must have always felt a twinge of inferiority.

A second reason was political animosity. Like the United States, Israel and Judah had a bitter civil war. But, in their case, the union failed and 10 of the 12 tribes seceded, becoming Israel. Only the tribe of Benjamin stayed loyal to Judah. Occasionally, the two kingdoms were at peace and even went to war on the same side, but there was often political tension, especially over religious matters.

There was also class animosity. To Amaziah, and probably to us had we been standing there, Amos didn’t look like he belonged. His hands would have been workman’s hands, not those of a scholar. His fingers may even have been stained from the juice of the fruit he picked and sold. He probably smelled of sheep and manure. He was uneducated and uncultured. His tone showed no deference to Amaziah’s position.

Let’s put ourselves in Amaziah’s shoes. We are a powerful, well educated, and well respected religious leader, with an inside track to the king. Then a smelly, loud, rude, immigrant prophet shows up. He is “uppity,” showing no deference or respect. He’s badmouthing the king who supports us. He won’t shut up. He’s pointing his fig-stained fingers at us as sinful. To us, he seems to obviously be here on some errand from our political enemies. He’s a fraud and maybe part of a political conspiracy!

The purpose of this exercise is not to absolve Amaziah, but to consider ourselves with sober judgment. We must remove any excuses we may have for dismissing a message from God because of the messenger God chose.

Messages from God may come from outside our theological circle or from a political enemy. They may be respectful and well-spoken or angry and rude. Woe to us, if we dismiss a prophet because of his “tone.”

Divine Hours Prayer: The Refrain for the Morning Lessons
And yet my people did not hear my voice, and Israel would not obey me. — Psalm 84.11

Read more about Decorating the Tombs of the Prophets
“Your fathers,” Jesus says, “would not have minded the prophets either, if the prophets were dead. #RussellMoore

Read more about The Naked Emotion of God
Many prophets engaged in actions that today would be considered questionable stunts…including publicly insulting kings and officials.