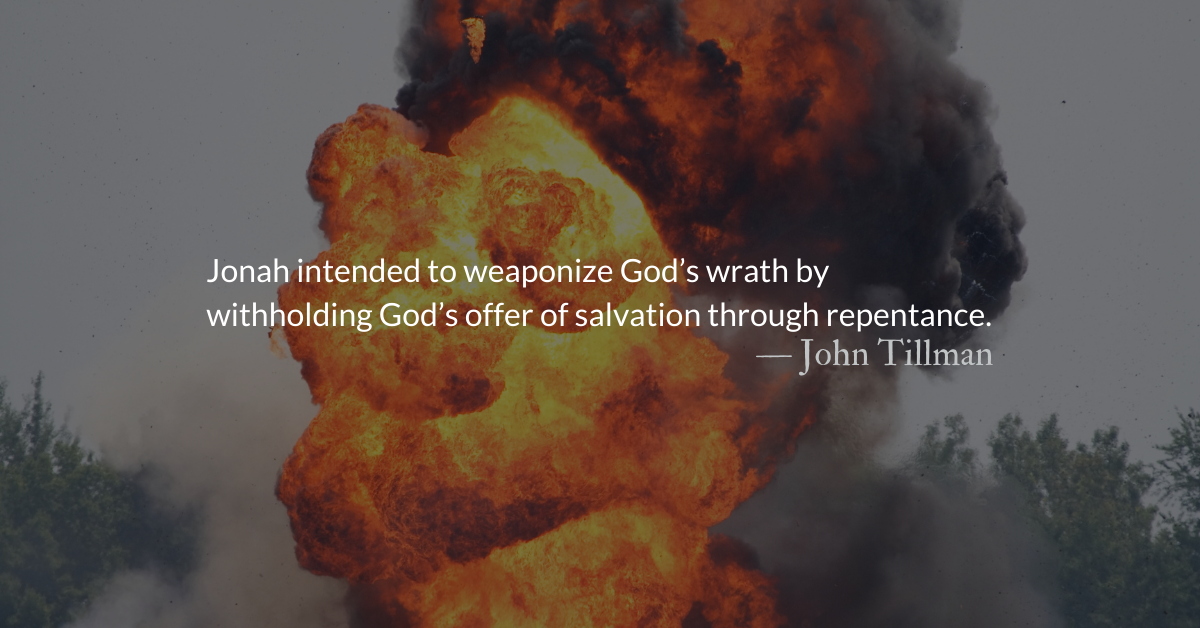 To Wicked Kings, Foreign and Domestic

Scripture Focus: Jonah 3.6-10
6 When Jonah’s warning reached the king of Nineveh, he rose from his throne, took off his royal robes, covered himself with sackcloth and sat down in the dust. 7 This is the proclamation he issued in Nineveh:
“By the decree of the king and his nobles:
Do not let people or animals, herds or flocks, taste anything; do not let them eat or drink. 8 But let people and animals be covered with sackcloth. Let everyone call urgently on God. Let them give up their evil ways and their violence. 9 Who knows? God may yet relent and with compassion turn from his fierce anger so that we will not perish.”

10 When God saw what they did and how they turned from their evil ways, he relented and did not bring on them the destruction he had threatened.

Reflection: To Wicked Kings, Foreign and Domestic
By John Tillman

Most people know that Jonah was sent to Nineveh, the capital of Assyria. Few remember that Jonah also delivered a message regarding the wicked king of Israel, Jeroboam II.

Jeroboam II is described as “doing evil” and not “turning away” from sin, but despite his wickedness and lack of repentance, God still chose to use him to expand Israel’s borders. Despite Jeroboam’s unrepentant wickedness, Jonah delivered this good word to Jeroboam. (2 Kings 14.23-27)

Amaziah, who threatened Amos when he brought messages of judgment against Jeroboam, is not described as objecting to Jonah’s positive messages. Likewise, scripture does not note any objections from Jonah regarding delivering good news to his own national leaders. However, the entire narrative of the book of Jonah is driven by his desire to keep from sharing God’s message with the enemies of his nation.

Nineveh was not just any wicked city, it was the capital of Assyria, the greatest existential political threat to Israel and a country actively oppressing and threatening Israel, even during the reign of an otherwise successful king such as Jeroboam II. Jonah was not unwise to fear them. They would eventually be the nation that destroyed Israel for her refusal to repent.

In the fish, Jonah pleaded for his own life and thanked God for hearing his repentance, but he wished for God to ignore the pleading and repentance of his enemies. Jonah intended to weaponize God’s wrath by withholding God’s offer of salvation through repentance.

We, unlike Jonah, must hold out hope even to our enemies. We must call for repentance from all people. We can share God’s love with any political threat, whether a foreign nation or a fringe party within our own nation.

God used a fish to save Jonah from drowning in the depths of the sea. But because of Jonah’s unrepentant hatred for those God wished to save, God abandoned Jonah to bake in the desert sun, alone.

We must abandon Jonah’s sinful wish to weaponize God’s wrath. God will not be our tool of destruction. When this is all we want from him, he will remove even the shade of his comforting presence from us and we, like Jonah, will be left alone in the heat of the desert.

Divine Hours Prayer: The Request for Presence
Let all who seek you rejoice and be glad in you; let those who love your salvation say forever, “Great is the Lord!” — Psalm 70.4

Read more about The Sign of Jonah and The Cross
Jesus is, indeed, “greater than Jonah,” as he claims in Matthew 12.

Read more about In Amaziah’s Shoes
Put ourselves in Amaziah’s shoes. Amos is badmouthing the king who supports us. He’s …obviously on some errand from our political enemies.