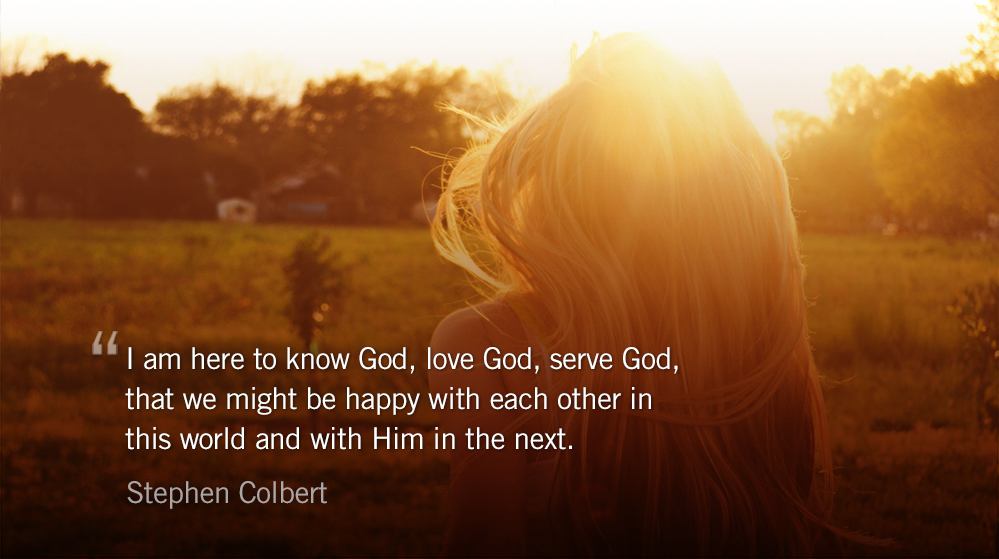 “Laughter has been implanted in our soul, that the soul may sometime be refreshed.” — John Chrysostom

Stephen Colbert taking over the desk of The Late Show this coming Tuesday is the crescendo of the past two decades of comedy. Modern comedy’s cocktail of political satire, tongue-in-cheek commentary, investigative reporting, nonsense, and Roonian rants — neatly packaged to go viral online — is now firmly rooted in prime time.
Scripture instructs believers to pray for “kings, and all who are in high positions.” Praying for those in government is often talked about; praying for cultural influencers (those “in high positions”) is often overlooked.

“For however often Jon Stewart and Colbert dismissed the notion that they had any mission beyond the (very difficult) one of telling great jokes, they had become a portal through which viewers made sense of American insanity. Their shows served as dense clouds of satirical antimatter.” — Joel Lovell

The Atlantic observes that “there are two broad things happening right now—comedy with moral messaging, and comedy with mass attention—and their combined effect is this: Comedians have taken on the role of public intellectuals.”

“Amy Schumer on misogyny, Key and Peele on terrorism, Louis C.K. on parenting, Sarah Silverman on Rand Paul, John Oliver on FIFA … these are bits intended not just to help us escape from the realities of the world, but also, and more so, to help us understand them. Comedians are fashioning themselves not just as joke-tellers, but as truth-tellers—as intellectual and moral guides through the cultural debates of the moment.” — Megan Garber

Long before the comedic pundits of today, G.K. Chesterton asserted that, “Whether a man chooses to tell the truth in long sentences or short jokes is a problem analogous to whether he chooses to tell the truth in French or in German.” While not all comedians are truth tellers, we can’t overlook the nuance and depth of work in those trying to integrate faith, truth, and goodness into satire.
GQ called Colbert “one of the country’s few public moral intellectuals.” The fashion magazine’s cover story highlights his faith as a core component of both the comedian’s worldview and work. At his previous show, Colbert had a quote from Jesuit priest Pierre Teilhard de Chardin taped to his screen: “Joy is the most infallible sign of the existence of God.”

“That impulse to be grateful, wants an object. That object I call God. Now, that could be many things. I was raised in a Catholic tradition. I’ll start there. That’s my context for my existence, is that I am here to know God, love God, serve God, that we might be happy with each other in this world and with Him in the next—the catechism. That makes a lot of sense to me. I got that from my mom. And my dad. And my siblings.” — Stephen Colbert