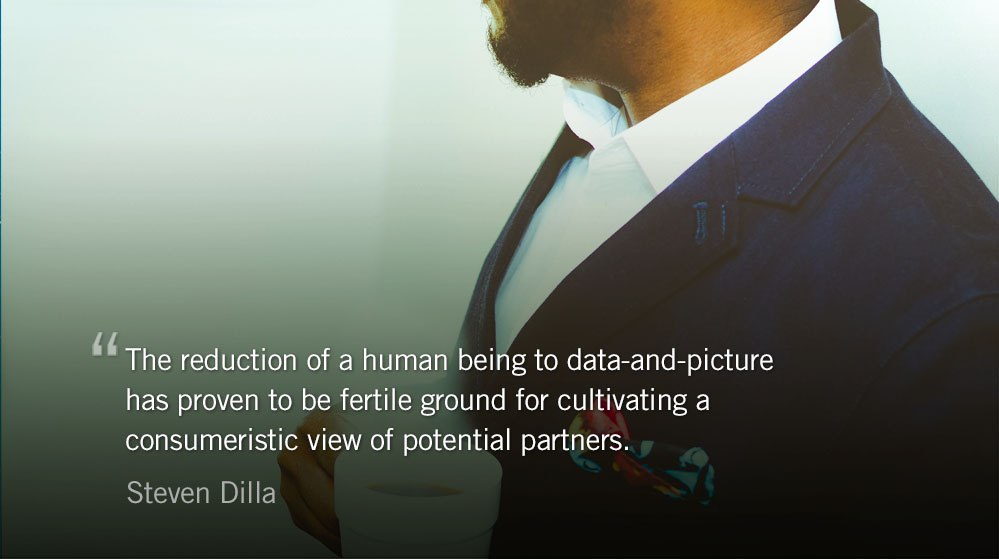 Earlier this week the AIDS Healthcare Foundation created kerfuffle in Los Angeles by taking out billboards that link dating apps Tinder and Grindr to Sexually Transmitted Diseases. Taking aim at the apps themselves, and not the behavior they promote, seems to call people to an all-in or abandon-ship decision.

Few cultural decisions for people of faith are this polar. More often than not we find ourselves the minority navigating a foreign land based on our understanding of Scripture and culture.

As a category, dating apps are growing rapidly. New offerings include networks just for farmers and gluten-free singles, as well as Netflix tastes and bacon affection (for real… although the later is owned by Oscar Meyer).

“Of 19,000 couples married between 2005 and 2012, more than a third met through an online dating site,” The Financial Times reports about the $2.1 billion industry. Highlights from Pew Research Center study reveal that:

Brokenness Online
This rapid growth has not come without problems. The reduction of a human being to data-and-picture has proven to be fertile ground for cultivating a consumeristic view of potential partners.

All the data on race I have is from dating sites, but on these sites black users, especially, there’s a bias against them. Every kind of way you can measure their success on a site — how people rate them, how often they reply to their messages, how many messages they get — that’s all reduced. — Christian Rudder, Founder, OKCupid

This week Salon highlighted three categories most prone to discrimination in online dating; “Fat people are ridiculed all the time. The plight of bald men has been well articulated by the likes of Larry David and Louis CK. And of course, anytime we talk about appearance, race will eventually come into play. Online dating apps provide fertile ground for these kinds of appearance-based biases to take root.”

The Illusion of Companionship
Most dating apps court users with the promise of a better experience and longer-lasting matches. Yet researchers can’t find data to back up these claims. “The ways online dating sites typically implement the services of access, communication, and matching do not always improve romantic outcomes; indeed, they sometimes undermine such outcomes.”

While there are success stories for those who meet online, there is also an abundance of disappointment and pain enhanced by the structure of the apps and the behaviors they encourage.

Eventually I realized this was an addiction. I had fun stories to tell. I looked put together. I was having adventures and figuring out public transit. I was “getting out there,”
But it felt wrong.
I realized that online dating was not going to take the place of a real support network. I was addicted to having someone to talk to in the evenings, even if it was just a prelude to a meet-up that never happened. When someone was texting with me, I felt wanted, and less lonely. — Debbie Weiss

Questions for Community
Perhaps the best questions for Christians in regard to most online dating networks are not “if” but “how.” Singles in faith communities have the opportunity to meet people they never would have been able to meet in generations past. The Christian theology of humanity made in the image of God can spur conversations which uncover more than data can show.

Most compelling, a Christian’s ability to draw their chief happiness, satisfaction, and identity from God can upend marketers’ efforts to try and fulfill that in a potential partner. This shift in worldview heads off the liability that data can’t prevent — trying to draw from a spouse what can only be received from your Creator.