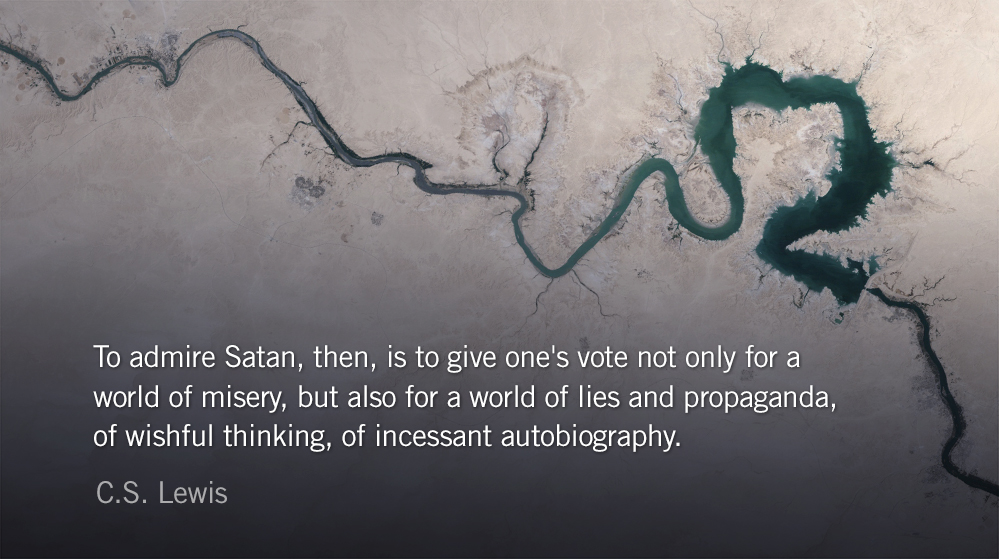 “His tone is a key to the success,” Robert Fulford writes of C. S. Lewis. Perhaps because Lewis’ built his career in academic writing, the vivid imagery he is known for is matched only by his literary precision and clarity in voice. Fulford continues:

It’s outspoken, often blunt, and clearly directed to those who possess little or no religious knowledge. It deploys his great talents as storyteller and arguer, always in a way that makes Christianity seem a common sense solution to the world’s most basic questions.

As a Christian writer, Lewis was strikingly ecumenical. He swept aside any special sectarian theology and devoted himself to the core belief, as he saw it — that’s what he means by “mere” in his title. He may have taken this position because he was dismayed by the sectarian hatred in his birthplace, Belfast, but it’s just as likely that he wanted his work to reach anyone who might conceivably be converted.

Lewis’s tone of blunt, yet friendly, intellectualism reflects his care for the unconvinced. He speaks as one who had been an outsider to faith himself, having returned to faith after seventeen years of what he defined as self-absorbed atheism. The return was partly due to discussions with his Oxford colleague, J.R.R. Tolkien.

Yet it was not just the like-minded with whom Lewis connected—and theological similarity was not always a predictor of fraternity. Fulford describes Lewis’s relationship with two famous students—John Betjeman, poet laureate in the 1970s, and Kenneth Tynan, the most brilliant drama critic of his time. Betjeman, a conservative religious man, despised Lewis. Tynan, a radical left-winger, admired him and remained grateful for his encouragement.

“Lewis was that rare sort of genius, able to combine high theological insight with vivid imagination, and it is precisely this coming-together that makes his writing so memorable,” says Bishop Robert Barron.

It’s Lewis’ use of vibrant pictures—stirring images of what could otherwise be cerebral spiritual matters—that casts the longest shadow. Of the imagery around hell in The Great Divorce, Bishop Barron writes:

When the narrator, in dialogue with a heavenly spirit, wonders where precisely Hell is in relation to the heavenly realm, the spirit bends down, pulls a single blade of grass and uses its tip to indicate a tiny, barely perceptible, fissure in the ground. “That’s where you came in,” he explains. All of Hell, which seemed so immense to the narrator, would fit into a practically microscopic space in Heaven. Lewis is illustrating here the Augustinian principle that sin is the state of being incurvatus in se (curved in around oneself). It is the reduction of reality to the infinitely small space of the ego’s concerns and preoccupations.

This is a picture Lewis expands in his masterful Preface to Paradise Lost. Lewis points out Milton’s brilliance in making hell look boring. Far too many accounts of hell, Lewis felt, make it a place of intrigue. Instead Milton paints hell as a place of profound dullness. Lewis writes:

Adam, though locally confined to a small park on a small planet, has interests that embrace “all the choir of heaven and all the furniture of earth.” Satan has been in the Heaven of Heavens and in the abyss of Hell, and surveyed all that lies between them, and in that whole immensity has found only one thing that interests Satan.

It may be said that Adam’s situation made it easier for him, than for Satan, to let his mind roam. But that is just the point. Satan’s monomaniac concern with himself and his supposed rights and wrongs is a necessity of the Satanic predicament.

Certainly, he has no choice. He has chosen to have no choice. He has wished to ‘be himself’, and to be in himself and for himself, and his wish has been granted. The Hell he carries with him is, in one sense, a Hell of infinite boredom.

To admire Satan, then, is to give one’s vote not only for a world of misery, but also for a world of lies and propaganda, of wishful thinking, of incessant autobiography. Yet the choice is possible. Hardly a day passes without some slight movement towards it in each one of us. That is what makes Paradise Lost so serious a poem.

“Hell is just – other people,” says Paul Bowles in Jean-Paul Sartre’s famous 1944 play about captive souls, No Exit. Lewis disagreed with his contemporary. In his view, hell is not other people. Rather, hell is the lack of any other with whom to be concerned. Hell is imprisoning ourselves within ourselves.

Bishop Barren concludes, “Love, on the contrary, which is the very life of Heaven, is the opening to reality in its fullness; it amounts to a breaking through of the buffered and claustrophobic self.”