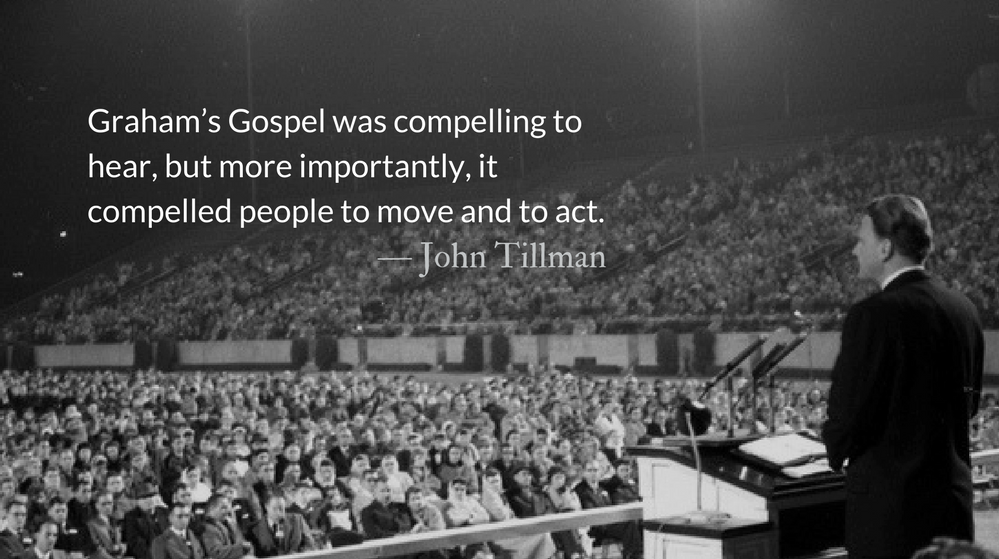 The Compelling Gospel of Billy Graham

Scripture: 1 Corinthians 13.12-13
For now we see only a reflection as in a mirror; then we shall see face to face. Now I know in part; then I shall know fully, even as I am fully known. And now these three remain: faith, hope and love. But the greatest of these is love.

I’m not going to Heaven because I have preached to great crowds or read the Bible many times. I’m going just like the thief on the cross who said in that last moment, “Remember me.” — Billy Graham

Reflection: The Compelling Gospel of Billy Graham
By John Tillman

Billy Graham’s message was never especially unique. He never intended it to be.

It was simply and elegantly, in the language of his time and of a hymn oft-sung at his rallies “to tell the old, old story of Jesus and his love.” (You may find the song at the 13 minute mark followed by a classic message on divine love.)

Graham’s gospel was compelling to hear, but more importantly, it compelled people to move and to act. They moved from their seats, yes, but they also moved compassionately into the world.

A few modern writers have been working very hard to try and write something negative about Graham. However, most of the negative things being said come from the man’s own confessions, both to the press and undoubtedly to God.

Methodologically he mourned when those saved at his events failed to enter the community of a church. Historically he confessed regret at being too involved with politics and not deeply enough involved in the civil rights movement. Although it strains the truth for some to assert that he spurned the Civil Rights movement or was on the wrong side.

The very gospel he preached compelled him to integrate his crusades and his staff in 1958. He held the first integrated public meeting in South Africa, by refusing to hold a crusade there unless it was integrated. He preached about integration, including tacit support for interracial marriage. And, although Martin Luther King publicly chided White ministers in general for not supporting his cause more directly, he publicly thanked Billy Graham saying Graham’s ministry aided his success.

Graham was also prophetic about today’s political reality. As the Moral Majority was formed in the 1980s, Graham warned that the far right has no interest in religion other than to manipulate it. Today his words are more true than ever.

The true gospel stands apart from political maneuvering and manipulation. We each may attempt to change it to suit ourselves, yet it is in fact working to change us.

We cannot stay the same once connected to the true gospel. As C.S. Lewis said, if we let him, Christ will change us, no matter the cost to us or to himself.

Prayer: The Request for Presence
Let those who seek you rejoice and be glad in you; let those who love your salvation say forever, “Great is the Lord!” — Psalm 70.4