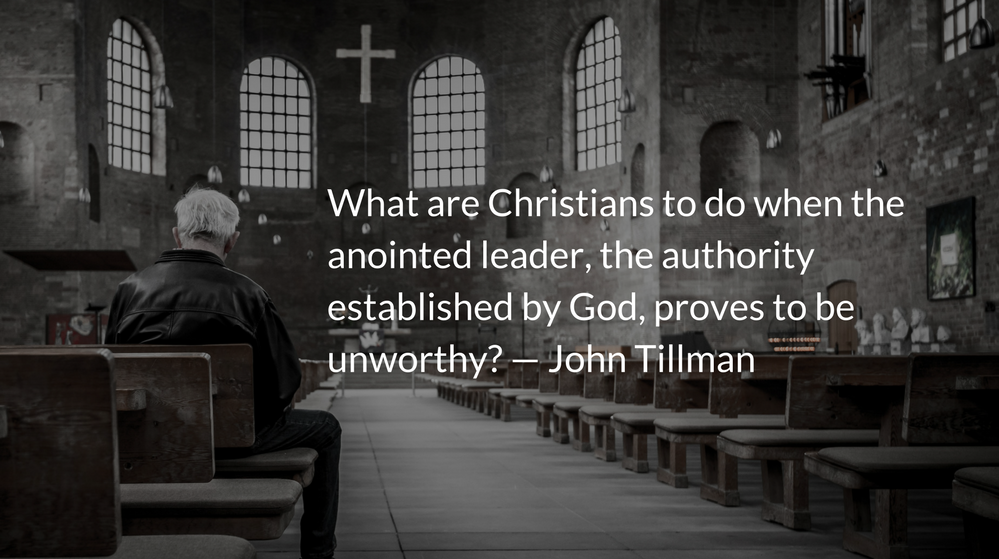 Scripture: Romans 13.1
Let everyone be subject to the governing authorities, for there is no authority except that which God has established.

Scripture: 1 Samuel 15.11
“I regret that I have made Saul king, because he has turned away from me and has not carried out my instructions.” Samuel was angry, and he cried out to the Lord all that night.

Today in our reading plan we come across two passages that, read together, show us a wide spectrum of God, government, and the role of spiritual leaders—Romans 13 and 1 Samuel 15.

Romans 13:1 and related passages seem to have become very popular with certain conservative Evangelicals since November. For the previous eight years, however, conservatives were mostly silent on Romans 13 and it was progressive Christians quoting these passages with great frequency. Biblical commands to submit to governing authorities grow and shrink in popularity as Christians are more, or less, satisfied with the governing authorities they must submit to.

The Bible shows us in many places that it is not uncommon for a political leader to be anointed by the religious leaders of the day, and yet that leader may fail to to honor God’s most basic requirements for leadership. It is also not uncommon for these kinds of leaders to ultimately be destroyed and removed from leadership by God. Saul is a great example of this pattern.

Samuel anointed Saul as king, yet nearly from the beginning, Saul was a blundering mess of a ruler. When God informs Samuel of Saul’s latest blunder, Samuel becomes angry and cries out to God all night before going to confront Saul.

Saul deals with Samuel like a modern politician speaking to the press. First, Saul does not obey the command of God. Then he lies, stating confidently that he obeyed completely. Samuel challenges him with facts. (“What is this bleating…”) Then Saul walks back his previous comment and gives an excuse. (“…to sacrifice to the Lord your God.” Emphasis mine.) When Samuel lays out the facts again, Saul then returns to his previous lie, doubling down on it—asserting his obedience and innocence of wrongdoing.

What are Christians to do when the anointed leader, the authority established by God, proves to be unworthy?

Samuel’s mourning for Saul and angry night of prayer helped him share God’s regret and rejection of the man he formerly supported. And, at God’s urging, despite the danger, Samuel began actively seeking out Saul’s replacement.

May we share God’s regret when leaders make poor choices and when governments fail to provide justice. May we not accept half-truths and lies—holding leaders accountable. May we turn away from leaders when directed by God, even if they tear our garments as we go.

The Morning Psalm
A crooked heart shall be far from me; I will not know evil… — Psalm 101:4