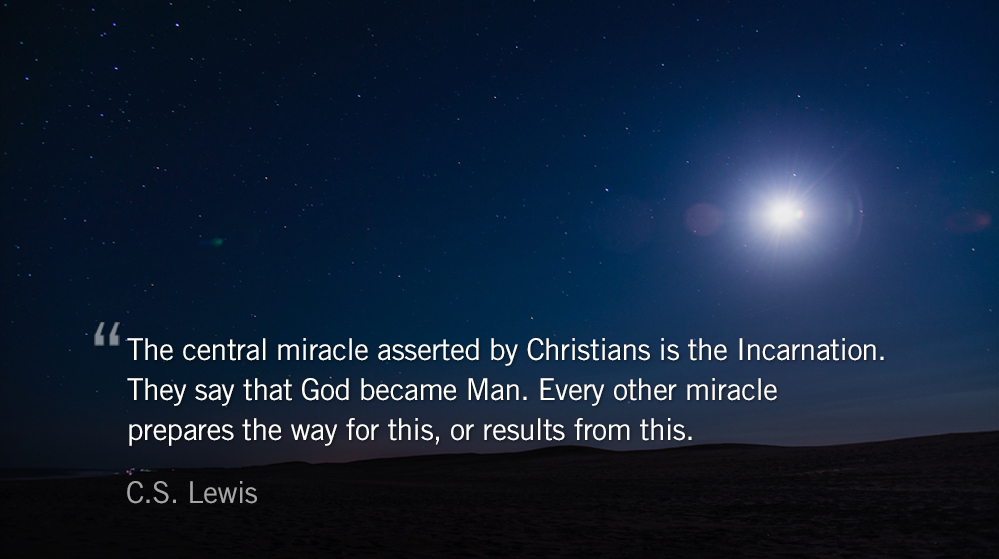 Even handkerchiefs or aprons that had touched Paul’s skin were carried away to the sick, and their diseases left them and the evil spirits came out of them. — Acts 19.12

“The central miracle asserted by Christians is the Incarnation. They say that God became Man,” writes C.S. Lewis in his book, simply entitled, Miracles. Lewis argues that it is essential Christians believe in the miracles in Scripture because, when looking at the Incarnation of Christ, “every other miracle prepares the way for this, or results from this.”
Inside the book Lewis defines a miracle as “an interference with nature by supernatural power.” He explains:

I contend that in all these miracles alike the incarnate God does suddenly and locally something that God has done or will do in general. Each miracle writes for us in small letters something that God has already written, or will write, in letters almost too large to be noticed, across the whole canvas of Nature. They focus at a particular point either God’s actual, or His future, operations on the universe.

Lewis does not leave much room for the argument that if miracles were to happen more frequently today many more would believe.

In all my life I have met only one person who claims to have seen a ghost. And the interesting thing about the story is that she disbelieved in the immortal soul before she saw the ghost and still disbelieves after seeing it… Seeing is not believing.
For this reason, the question whether miracles occur can never be answered simply by experience. Every event which might claim to be a miracle is, in the last resort, something presented to our senses… and our senses are not infallible.

The occurrence of miracles in Scripture, according to Lewis, is part of God’s larger purpose of redeeming a broken world and proclaiming his love for those in it.

God does not shake miracles into Nature at random as if from a pepper-caster. They come on great occasions: they are found at the great ganglions of history—not political or social history, but of that spiritual history which cannot be fully known by men.
How likely is it that you or I will be present when a peace-treaty is signed, when a great scientific discovery is made? That we should see a miracle is even less likely. Nor, if we understand, shall we be anxious to do so. ‘Nothing almost sees miracles but misery’. Miracles and martyrdoms tend to bunch about the same areas of history.