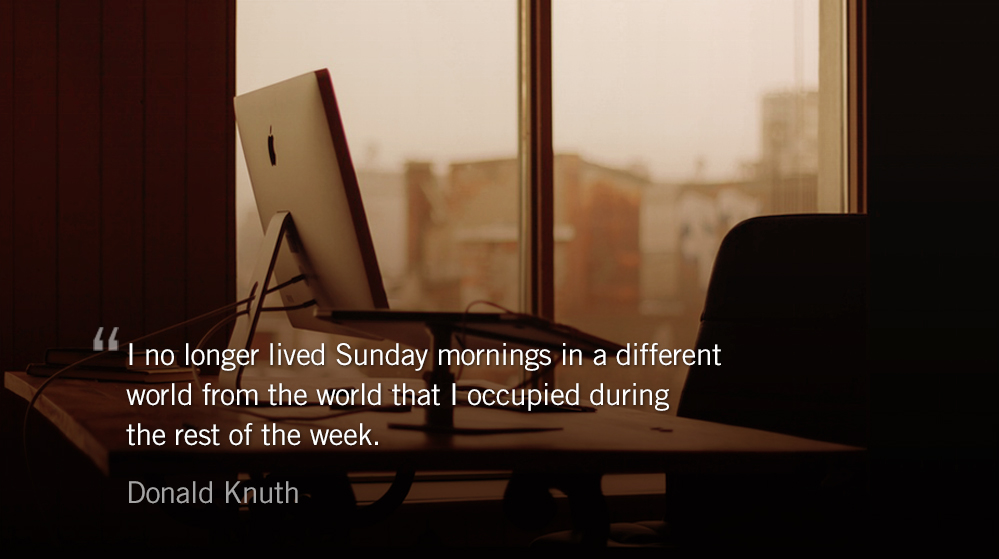 When Silas and Timothy arrived from Macedonia, Paul was occupied with the word, testifying to the Jews that the Christ was Jesus. — Acts 18.5

It’s no secret that focus is one of the primary skills of successful people. Ralph Waldo Emerson writes, ”Concentration is the secret of strengths in politics, in war, in trade, in short in all management of human affairs.”
Sometimes focus creates an almost contradictory narrative, like in the case of Donald Knuth—the legendary computer scientist who doesn’t use email. Dr. Knuth is known as the “father of the analysis of algorithms” and his work helped create the foundation for computers and smartphones.

The Apostle Paul’s life is strikingly similar. Paul was wildly accomplished in his own field—his knowledge of the scriptures was astonishing and his exposure to the gospel came first-hand from the resurrected Christ. Yet in Acts the author notes that “Paul was occupied with the word.”
Paul could have had his attention focused on the formation of the first churches, the selection of leaders, how to best interact with the Roman government, or any number of other pressing issues. Instead his mind was dominated with the word of God.
Though Paul set his mind on things above, the apostle was not preoccupied by his personal spiritual experience. To be preoccupied is to be dominated or engrossed—to the exclusion of other things. Paul was profoundly God-centered and radically others-focused.
All that Paul accomplished—traveling over 8,000 miles to 48 different places without modern transportation to form the foundation of the Christian Church—happened because he was occupied with the word. It was Scripture that turned him toward the world’s greatest need and the Spirit’s guidance that magnified the effects of his gifts.
It is occupation with the word that allows us to focus on vocation and family as an extension of faith. In Dr. Knuth’s case, the scientist reported a turning point in his career happened when he took an algorithmic approach to scripture—his work and faith integrated. “I no longer lived Sunday mornings in a different world from the world that I occupied during the rest of the week.”
Through focus on the word our lives, vocations, and families are enriched in ways that transcend our individual abilities. As Jesus said, “Seek first the kingdom of God and his righteousness, and all these things will be added to you.”