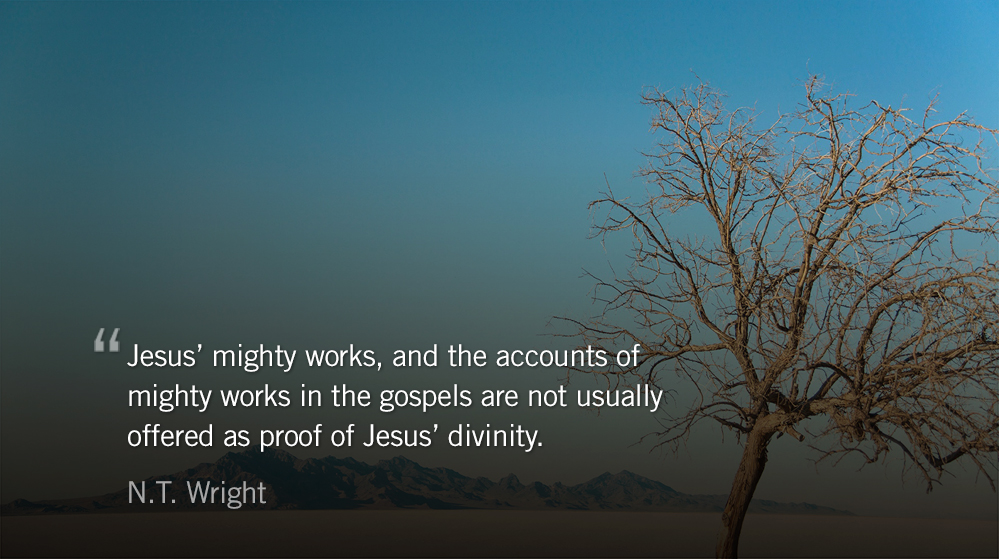 We are among the first generations in history to approach miracles first from a place of skepticism. In Jesus and the Victory of God N.T. Wright explores why we are skeptical and, more importantly, what the miracles truly demonstrate:

The older liberalism, dating back at least to the eighteenth century and in particular to Hume, claimed that ‘miracles’ never happened, or at any rate that there could never be sufficient evidence to believe that they had; hence, that Jesus probably never performed any; hence, that perhaps he was not after all ‘divine.’

Both of these lines of thought, in fact, contain the same non sequitur: the strongest incarnational claims in the New Testament (e.g. those in Paul) have nothing to do with Jesus’ mighty works, and the accounts of mighty works in the gospels are not usually offered as ‘proof’ of Jesus’ ‘divinity.’

The word ‘miracle,’ by contrast, has come to be associated with two quite different questions, developed not least in the period of the Enlightenment: (a) Is there a ‘supernatural’ dimension to the world? (b) Which religion, if any, is the true one?

‘Miracles’ became, for some, a way of answering ‘yes’ to the first and ‘Christianity’ to the second. Jesus’ ‘miracles’ are, in this scheme, a ‘proof’ that there is a god, who has ‘intervened’ in the world in this way.

Hume and his followers, as we saw, put it the other way round: granted that ‘miracles’ do not occur, or at least cannot be demonstrated to occur, does this mean that all religions, including Christianity, are false, and the Bible untrue?

Few serious historians now deny that Jesus, and for that matter many other people, performed cures and did other startling things for which there was no obvious natural explanation.

But Christian apologetics has moved on as well: ‘miracles’ are not advanced as a ‘proof’ of anything much. What matters far more is intention and meaning. What did Jesus think he was doing, and why?

From the perspective of a follower of Jesus at the time, his mighty works will have been interpreted within the context of his overall proclamation: they would be seen as signs that the kingdom of Israel’s God was indeed coming to birth.

Jesus’ mighty works thus had the effect of gathering the community of ‘all Israel,’ in accordance with ancient prophecy. They were linked very closely with the great blessing of the renewed covenant, namely, the forgiveness of sins.