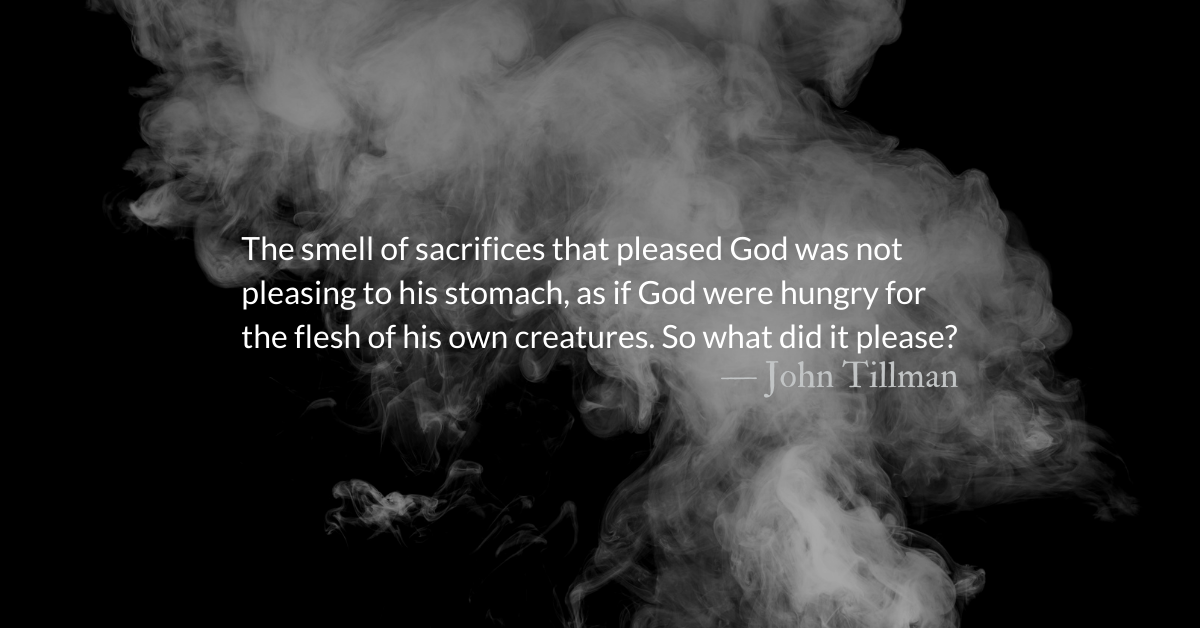 The Smell of Our Sacrifices

Scripture Focus: Numbers 22.2
2 “Give this command to the Israelites and say to them: ‘Make sure that you present to me at the appointed time my food offerings, as an aroma pleasing to me.’

Reflection: The Smell of Our Sacrifices
By John Tillman

Based on Numbers 22 and similar scriptures, I have often joked at a barbeque that “Even God likes the smell of meat cooking over a fire.” This marginally “biblical” joke is a good chuckle for Bible nerds but also raises legitimate questions to ponder.

The smell of sacrifices that pleased God was not pleasing to his stomach, as if God were hungry for the flesh of his own creatures. So what did it please?

Smells stir up powerful emotions and memories within us. This is a part of God’s design in us, so when God tells us that smells bring him pleasure, emotional connection and memory seem the likely intention of God’s meaning. What emotions or memories are stirred in an eternal being like God, when the smell of sacrifices wafts through his tabernacle?

The ceremonies of the Tabernacle and Temple point both backwards and forwards. The spaces and their design evoke images of Eden and images of God’s Temple as described in Revelation and other visions of prophets throughout the Bible. The activities, such as sacrifices, also point both forward and backward in time.

The sacrifices point back to Eden. Acting as priest for his newly sinful and flawed children, Adam and Eve, God made the first animal sacrifice. These animal’s skins “covered” the nakedness of Adam and Eve. Their inner shame, that expressed itself in fear and a desire to hide, was comforted and covered tenderly by God.

The sacrifices point forward to the cross and to Christ’s victory. Jesus’ sacrifice on the cross is the last, and only, sufficient sacrifice for sin. In Revelation, Jesus is the Lamb, slain but still living, victorious and triumphant.

How do our sacrifices smell?

When our sacrifices (our tithes, our offerings, our volunteering, our serving others, our forgiving of wrongs, etc.) are given today, they also have a wafting influence that testifies to God, to each other, and to the world. Paul interprets this metaphorically and spiritually in examples of living our faith before others, sacrificing to give aid to each other, and as Christ giving himself for us. (2 Corinthians 2.15-16; Philippians 4.18; Ephesians 5.2)

Let us then take the command of God seriously, and make our daily sacrifices ones which aid one another, aid our communities, and aid the body of Christ as it serves the world.

Divine Hours Prayer: The Greeting
I will offer you a freewilll sacrifice and praise your Name, O Lord, for it is good. — Psalm 54.6

Read more about Sacrifice of Self
We have been called to imitate our self-sacrificing savior, Jesus, by giving of ourselves to do good for the benefit of others.

Read more about Anointed Servants
Sometimes when we think of sacrifices, and especially of the cross, we think of God demanding to be “satisfied.” This is an incorrect/incomplete picture.