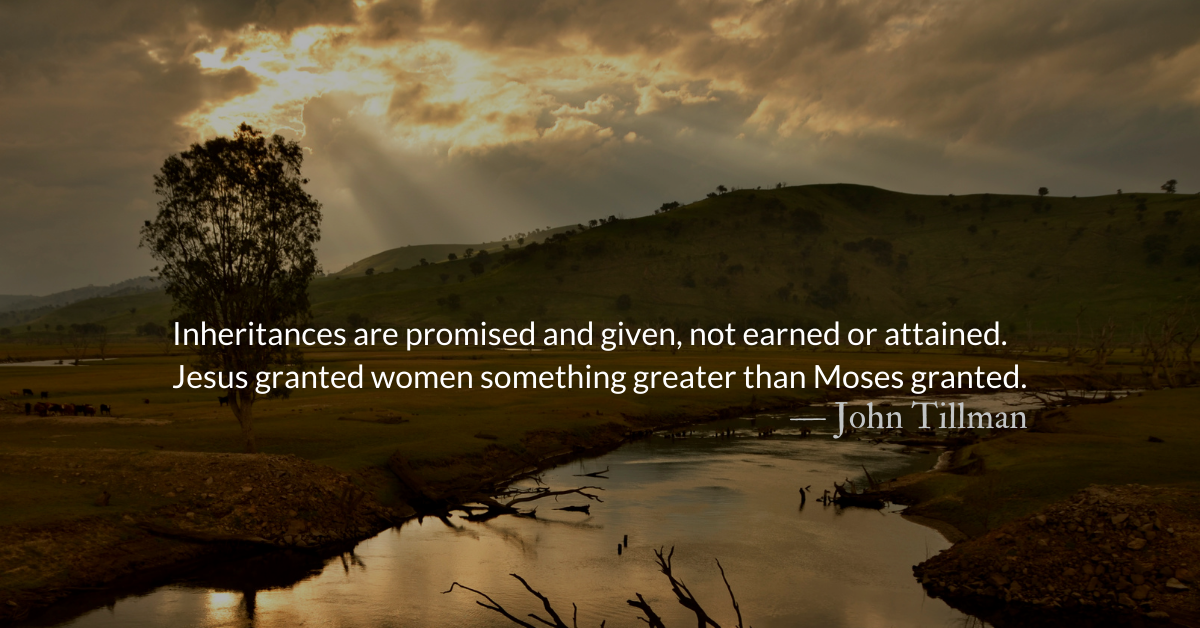 Scripture Focus: Numbers 27.5-7
5 So Moses brought their case before the Lord, 6 and the Lord said to him, 7 “What Zelophehad’s daughters are saying is right. You must certainly give them property as an inheritance among their father’s relatives and give their father’s inheritance to them.

In the ancient near east most women barely ranked above pack animals. They didn’t inherit property, they were property. Their word was not considered reliable. Their will was not considered or acknowledged. This was a cultural reality passed down from the very first women of Israel—Jacob’s wives, Leah and Rachel.

Leah and Rachel show us the spectrum of marriage at that time. Rachel represents a fairytale saying mutual love was possible. Leah reveals an ugly reality that sexual slavery, loveless manipulation, and bitterness were the far more likely normality. Both women recognized Laban sold them like property. (Genesis 31.14-16)

Generations later, descendants of Rachel’s first born son, Joseph, come before the Lord to seek justice. Mahlah, Noah, Hoglah, Milkah, and Tirzah lay out a case, not only for themselves but for every woman to follow them. God, the righteous judge, grants their request and grants the same rights to all women of Israel.

It would be easy to pause here and simply praise the daughters of Zelophehad as heroines of women’s rights. However, the answer God gives them is a bandaid, not a biblical ideal. When we wish to restore biblical ideals, we must turn far enough back in our Bibles to find the ideal God set up.

Jesus taught that some laws of Moses were “not this way from the beginning.” These laws were given because the hearts of the Israelites were too hard to live up to Edenic ideals (Matthew 19.3-9).

Jesus gives primacy of importance to Edenic law rather than Mosaic law. And just as Jesus looked to a greater law than Moses, he grants to men and women a greater inheritance than any land or property.

Inheritances are promised and given, not earned or attained. They can’t be purchased or procured. They are granted, not gained. Jesus granted women something greater than Moses granted.

In every interaction with women, we see Jesus elevating them and treating them as if they belonged among his disciples. He gave to women a unique revelation, being the first to see and speak of his resurrection.

May God soften our hearts to live beyond the Mosaic rules for the hardhearted. In Jesus, the Edenic ideal, not the Mosaic compromise, is restored. Daughters of Eve, and of Rachel, carry a gospel inheritance. Without their inclusion, the kingdom of God is incomplete.

Read more about Resisting Culture’s Mold
Laban’s daughters both recognize that they have been badly treated. The women describe their marriages as being “sold” like foreigners.

Read more about It’s in the Bible
If we look carefully, we can see God actively disrupting cultural assumptions and human traditions that people in scripture accepted as normal.