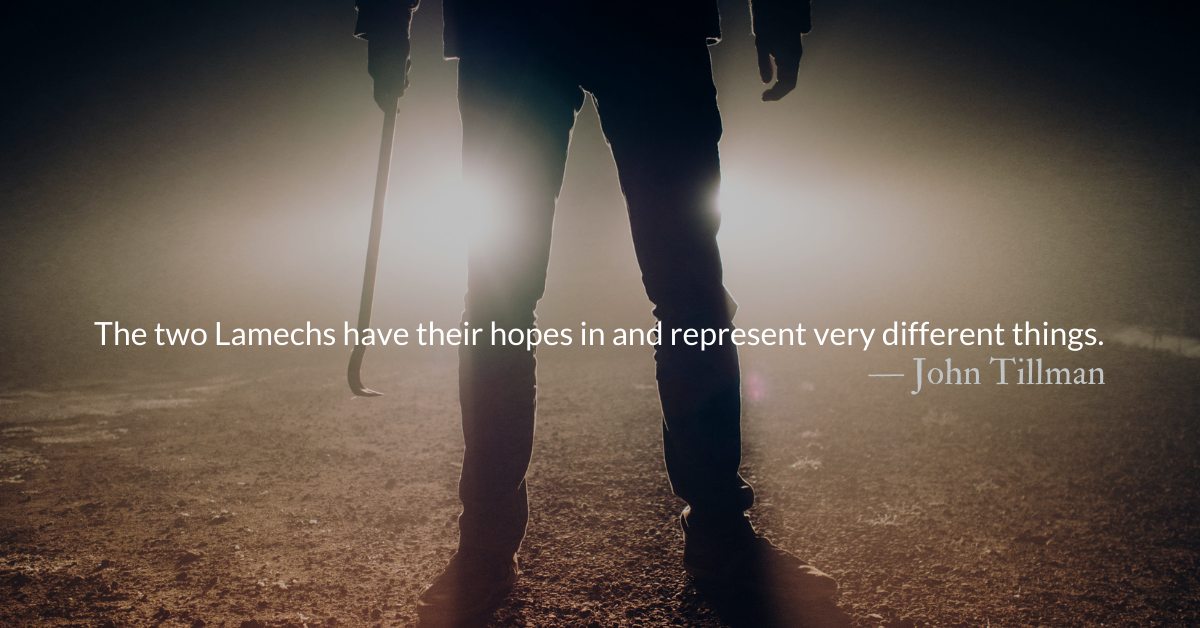 Scripture Focus: Genesis 5.28-29
28 When Lamech had lived 182 years, he had a son. 29 He named him Noah and said, “He will comfort us in the labor and painful toil of our hands caused by the ground the Lord has cursed.”

Matthew 5.43-48
43 “You have heard that it was said, ‘Love your neighbor and hate your enemy.’ 44 But I tell you, love your enemies and pray for those who persecute you, 45 that you may be children of your Father in heaven. He causes his sun to rise on the evil and the good, and sends rain on the righteous and the unrighteous. 46 If you love those who love you, what reward will you get? Are not even the tax collectors doing that? 47 And if you greet only your own people, what are you doing more than others? Do not even pagans do that? 48 Be perfect, therefore, as your heavenly Father is perfect.

Cain’s Lamech is his sixth descendant, a number often associated with humanity and with the days of creation. Lamech multiplies all of Cain’s sins. (Genesis 4.19-24) His hope is in violence and oppression. He violates God’s establishment of marriage by “marrying” two wives. (The Hebrew is not the same word as “marry” or  “wed” but means “take” as in carry away or seize. This implies violence in the taking of these women.)

Cain’s Lamech multiplies violence. He is proud of being more violent than any other man. He escalates violence and rejects peace. He seeks to weaponize God’s curse on Cain for his violent advantage.

Seth’s Lamech is his eighth descendent, a number associated with the “eighth day” or rebirth of creation. To Eve, Seth is God’s replacement for Abel, who Cain killed. Seth’s line represents hope in God and rebirth. This is the hope in which Lamech names his son, Noah. Through Noah, Lamech prophesied that the curse of the garden would be lifted and God would comfort his people. (Genesis 3.17; Romans 8.20)

The peace, comfort, and the breaking of Eden’s curse did indeed come through Lamech and his son, Noah. They are both included in the genealogy of Jesus, who gives us peace and comfort in a world flooded by darkness.

Noah was placed on a wooden ark to save himself and his family from evil, violent people who filled the earth with bloodshed. Jesus placed himself on a wooden cross and drowned himself in the flood of our sins. Jesus brought us up from the watery grave of our sin, to deliver us from destruction. Through Noah and Christ, we have a new covenant. We are to love, not hate, our enemy. We are to not be self-serving but bless all around us.

The literal sons of Cain’s Lamech died in the flood. But his ideological descendants abound. There are two lines of mankind.

Read more about Responding to Political Violence
Despite our sense of moral superiority, we have not advanced beyond violence for political ends.

Read more about Choosing Gentleness Over Violence
We cannot continue posting and liking things that are resentful, quarrelsome, and the opposite of gentle, yet expect to represent Christ.