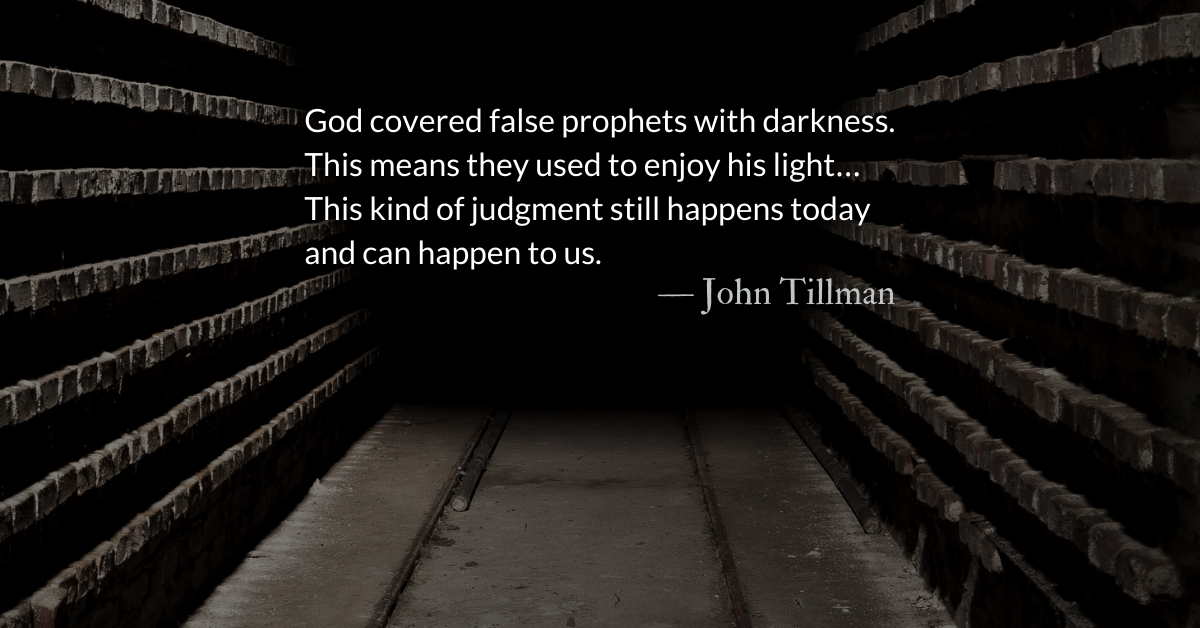 Turn Out the Lights

Scripture Focus: Micah 3.5-9
​​5 This is what the Lord says:
“As for the prophets
who lead my people astray,
they proclaim ‘peace’
if they have something to eat,
but prepare to wage war against anyone
who refuses to feed them.
6 Therefore night will come over you, without visions,
and darkness, without divination.
The sun will set for the prophets,
and the day will go dark for them.
7 The seers will be ashamed
and the diviners disgraced.
They will all cover their faces
because there is no answer from God.”
8 But as for me, I am filled with power,
with the Spirit of the Lord,
and with justice and might,
to declare to Jacob his transgression,
to Israel his sin.

Reflection: Turn Out the Lights
By John Tillman

The prophets who opposed Micah said pleasant things. Micah did not.

They leaned on God’s unconditional love for his people and leaned away from talking about the nation’s sins. They promised peace at home and victory at war. “Is not the Lord among us? No disaster will come upon us.” (Micah 3.11) Because of this, they were trusted by kings and political figures and had the ears of the powerful and the wealthy. Glory and wealth and food and fame were their rewards.

Micah attacked his prophetic opponents, political powers, and the people with no-holds-barred truth. Micah did this even though he lived under the rule of Hezekiah, one of the best kings in Judah’s history. (Sin still exists! Even under leaders we think are “good”!) Despite living under a “good king” Micah was loud, angry, and abrasive about sin in high places.

Micah’s writing doesn’t mention threats on his life, but killing him must have at least been discussed in the halls of power. Many years later, when Jehoiakim’s government was about to kill Jeremiah on a treason charge, Micah was brought up in Jeremiah’s defense. They basically said, “How can we kill Jeremiah for his offensive prophecies when Hezekiah didn’t kill Micah for his?” (Jeremiah 26.16-19)

Micah’s opponents faced no such threats. They enjoyed the favor of their chosen audience rather than the favor of God. The secular and religious prophets that serve our culture also desire glory, wealth, food, and fame. To a certain degree, we all do.

Today’s world is so polarized that often “prophets” choose one group to comfort and one to offend. They purposely outrage one group to provoke an attack so that others will race to their defense. Christian and secular leaders do this and we should be wary of these tactics.

This kind of judgment still happens today and can happen to us. If we ignore the light long enough, God will blind us. If we attack every prophet who says something we find offensive, we’ll never be at peace.

In choosing prophets that please us, we will soon find ourselves ashamed in the dark and isolated from the God we stopped listening to.

Divine Hours Prayer: The Request for Presence
May God be merciful to us and bless us, show us the light of his countenance and come to us.
Let your ways be known upon earth, your saving health among all nations. — Psalm 61.5

Read more about The Losers Who Write History
May we learn to listen to “losers” and…dissenting voices, testing every “prophecy” against scripture.