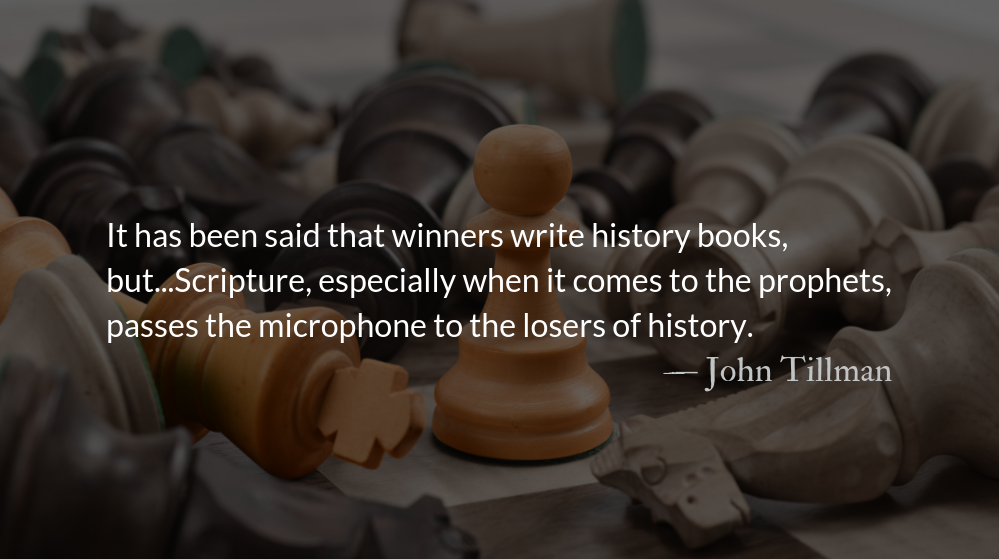 The Losers Who Write History

Jeremiah 26.16-19 (quoting Micah 3.12)
Then the officials and all the people said to the priests and the prophets, “This man should not be sentenced to death! He has spoken to us in the name of the Lord our God.”

Some of the elders of the land stepped forward and said to the entire assembly of people, “Micah of Moresheth prophesied in the days of Hezekiah king of Judah. He told all the people of Judah, ‘This is what the Lord Almighty says:

“‘Zion will be plowed like a field,
Jerusalem will become a heap of rubble,
the temple hill a mound overgrown with thickets.’

“Did Hezekiah king of Judah or anyone else in Judah put him to death? Did not Hezekiah fear the Lord and seek his favor? And did not the Lord relent, so that he did not bring the disaster he pronounced against them? We are about to bring a terrible disaster on ourselves!”

Reflection: The Losers Who Write History
By John Tillman

In our passage today we read a prophecy from Micah that was quoted as precedent in defense of the prophet Jeremiah at least 80 years later.

Micah prophesied during the time of Hezekiah, one of the few kings of Judah who obeyed God and lived righteously. Yet even under a “good” king Micah spoke of the leaders of Judah when he said, “Therefore because of you, Zion will be plowed like a field, Jerusalem will become a heap of rubble, the temple hill a mound overgrown with thickets.”

Micah, it seems, lived in a time when dissent was not considered unpatriotic disloyalty. Hezekiah, listened, repented, and the prophesied disaster was, seemingly, averted. In reality it was only delayed, like Hezekiah’s prophesied death.

Jeremiah, by contrast, lived during the last gasps of a failing kingdom, amidst an evil generation and a corrupt government. There were still some who stood up to prevent the silencing of dissenting voices. But eventually, Jeremiah was killed in exile for his continued “unpatriotic” messages.

It has been said that winners write history books, but in the case of the Bible, that is decidedly not true. Scripture, especially when it comes to the prophets, passes the microphone to the losers of history.

There were prophets other than the ones in the canon of scripture. Micah mentions them in his writing. They sided with powerful kings, predicted good things to get a financial benefit, and spread the king’s vision of the country’s future instead of God’s.

From the standpoint of the time, these powerful, wealthy prophets were the winners. Yet, not one of those glowingly positive, king-praising prophets’ writings are in our Bible. Instead we have the writings of the losers. The cries of the oppressed. The letters from those imprisoned in the Concord jails, and Birmingham jails of Judah and Israel and often letters from those killed.

The same Jesus who wept over “Jerusalem, who kills the prophets” was also not afraid to utilize biting sarcasm on the topic, saying, “surely no prophet can die outside Jerusalem!”

Jesus also condemned the religious leaders who decorated the prophet’s tombs. He recognized that when we venerate prophets, we are often just venerating ourselves by proxy—envisioning ourselves in their role.

Prayer: The Refrain for the Morning Lessons
I will bear witness that the Lord is righteous; I will praise the Name of the Lord Most High  — Psalm 7:18

Additional Reading
Read More about How to Read Prophetic Judgment :: Readers’ Choice
The best way to read prophecy is to imagine yourself not as the speaker, but as the spoken to.

Read More about Decorating the Tombs of the Prophets
The most difficult thing about following a risen and reigning prophet, priest, and king, is that he will not leave us alone. He will keep bugging us.