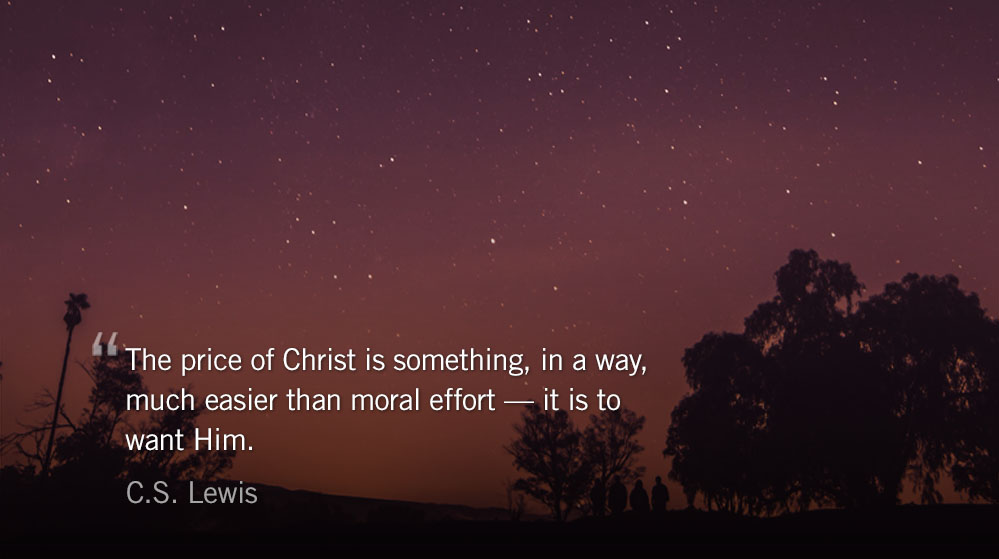 Philippians 1.21
For to me to live is Christ, and to die is gain.

The price of Christ is something, in a way, much easier than moral effort — it is to want Him. — C.S. Lewis

There are three kinds of people in the world. The first class is of those who live simply for their own sake and pleasure, regarding Man and Nature as so much raw material to be cut up into whatever shape may serve them.

In the second class are those who acknowledge some other claim upon them — the will of God, the categorical imperative, or the good of society — and honestly try to pursue their own interests no further than this claim will allow. They try to surrender to the higher claim as much as it demands, like men paying a tax, but hope, like other taxpayers, that what is left over will be enough for them to live on.

But the third class is of those who can say like St. Paul that for them “to live is Christ.” These people have got rid of the tiresome business of adjusting the rival claims of Self and God by the simple expedient of rejecting the claims of Self altogether. The old egoistic will has been turned round, reconditioned, and made into a new thing. The will of Christ no longer limits theirs; it is theirs. All their time, in belonging to Him, belongs also to them, for they are His.

Because there are three classes, any merely twofold division of the world into good and bad is disastrous.

It overlooks the fact that the members of the second class (to which most of us belong) are always and necessarily unhappy. The tax which moral conscience levies on our desires does not in fact leave us with enough to live on.

The Christian doctrine that there is no “salvation” by works done according to the moral law is a fact of daily experience. Back or on we must go. But there is no going on simply by our own efforts. If the new Self, the new Will, does not come at His own good pleasure to be born in us, we cannot produce Him synthetically.

Editor’s Note: I included this today as an extension to yesterday’s stirring thoughts from J.C. Ryle. These two men, in addition to their contributions to historic Christianity, articulate the tensions and glories that wait ahead of us on the journey of faith. Let us set our eyes on Christ, our hope and glory.