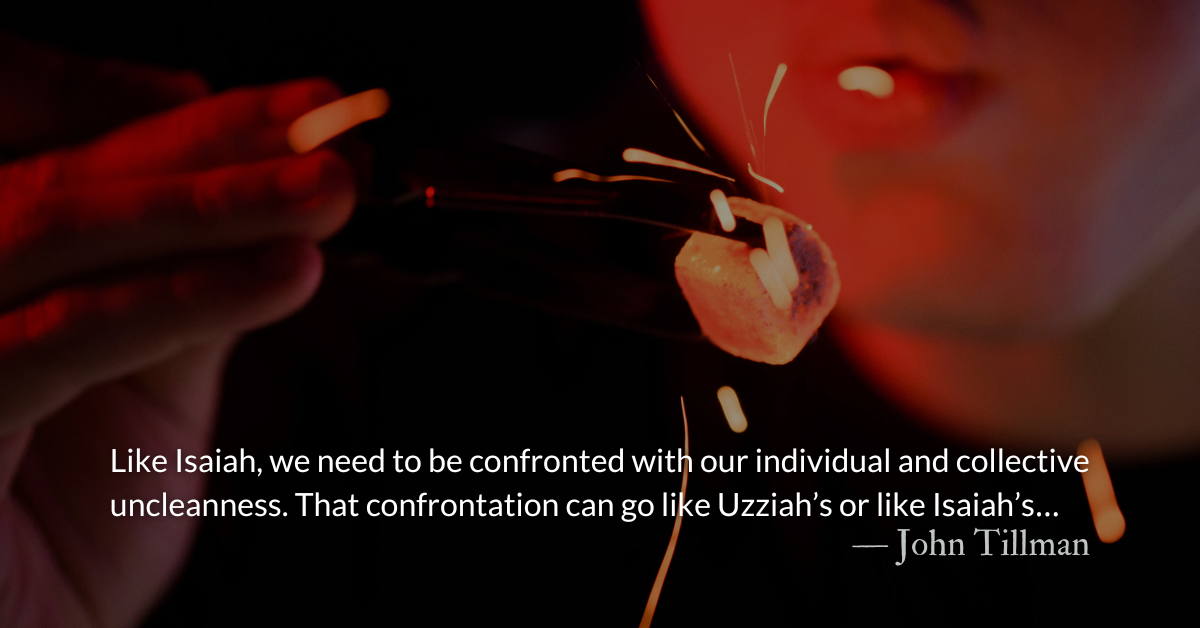 Scripture Focus: Isaiah 6.1-6
1 In the year that King Uzziah died, I saw the Lord, high and exalted, seated on a throne; and the train of his robe filled the temple. 2 Above him were seraphim, each with six wings: With two wings they covered their faces, with two they covered their feet, and with two they were flying. 3 And they were calling to one another:
“Holy, holy, holy is the Lord Almighty;
the whole earth is full of his glory.”
4 At the sound of their voices the doorposts and thresholds shook and the temple was filled with smoke.
5 “Woe to me!” I cried. “I am ruined! For I am a man of unclean lips, and I live among a people of unclean lips, and my eyes have seen the King, the Lord Almighty.”
6 Then one of the seraphim flew to me with a live coal in his hand, which he had taken with tongs from the altar. 7 With it he touched my mouth and said, “See, this has touched your lips; your guilt is taken away and your sin atoned for.”

2 Chronicles 26.18-19
18 They confronted King Uzziah and said, “It is not right for you, Uzziah, to burn incense to the Lord. That is for the priests, the descendants of Aaron, who have been consecrated to burn incense. Leave the sanctuary, for you have been unfaithful; and you will not be honored by the Lord God.”

19 Uzziah, who had a censer in his hand ready to burn incense, became angry. While he was raging at the priests in their presence before the incense altar in the Lord’s temple, leprosy broke out on his forehead.

Unlike many prophets we have read, Isaiah was no outcast. He was a palace insider, accustomed to power, a friend to kings. According to Jewish tradition, he may even have been of royal blood himself. There is no question, however, that Isaiah’s writing is among the most treasured of the prophetic books. He was a highly educated, poetic, artistic, skilled writer who lived in a golden age of mostly good kings.

We often think that a bit more power, a bit more influence, one “godly” leader will be just what we need to restore a “golden age.” But every earthly golden age has been built by corrupt power that stood on the backs of oppressed people.

Isaiah saw this power and pride up close. He saw it corrupt the hearts of at least two good kings—Hezekiah and Uzziah. Both were exemplary leaders up to a point. Both were brought down by pride.

Uzziah’s death, interestingly, is mentioned right before Isaiah describes encountering the Lord in his Temple. Uzziah’s experience in the Temple was humiliating, (2 Chronicles 26.21) resulting in his exile and death. Uzziah’s fate must have been in the back of Isaiah’s mind as he was confronted by a vision of God’s heavenly throne room overlapping the physical Temple.

Standing where Uzziah was struck with leprosy, Isaiah expected to be ruined. He knew that he, like Uzziah, was unclean before the Lord. But Isaiah’s outcome was different. Uzziah angrily claimed purity and was made unclean. (2 Chronicles 26.18-20) Isaiah fearfully confessed uncleanness and was made pure.

Like Isaiah, we need to be confronted with our individual and collective uncleanness. (Isaiah confesses both.) That confrontation can go like Uzziah’s or like Isaiah’s. When we confess that we deserve censure, the censer of God burns away our sin, yet we are miraculously not consumed.

Normally, when ritually clean things touched ritually unclean things, the clean became contaminated. However, the coal from the altar purified Isaiah as Jesus purifies us. Jesus touched unclean lepers and they became clean. No matter how corrupted or sinful we may be, Jesus is willing to make us clean. (Matthew 8.2-3)

Isaiah can testify that golden ages aren’t what they are cracked up to be. Rather than an earthly golden age, we need a heavenly one. This begins by acknowledging that we deserve ruin, and getting renovated instead.

Divine Hours Prayer: The Refrain for the Morning Lessons
Mercy and truth have met together; righteousness and peace have kissed each other. — Psalm 85.10

Read more about Where is the Love?
Thank Jesus for caring enough about you to keep kicking over your tables and cleaning up your mess.

Read more about Seeking After a Seeking God
God is a seeking God, he is always ready to meet us where we are…He will meet with us in a corrupted Temple, as he met with Isaiah.