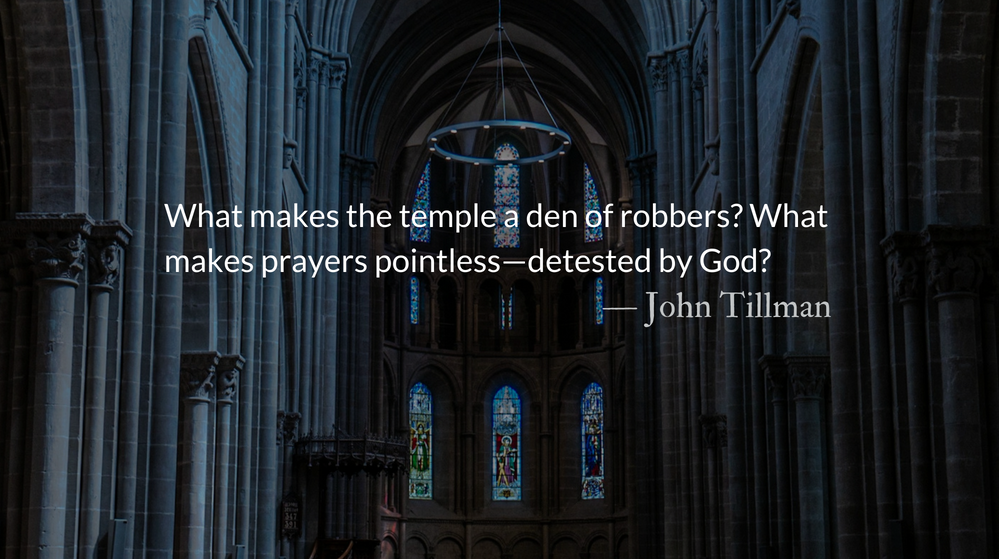 We read two passages today about what makes our prayers worthless and detestable to God.

The first passage is Jesus, in anger, clearing out the temple. The second passage is the portion of Jeremiah which Jesus is referencing when he says “My house will be called a house of prayer,’ but you are making it ‘a den of robbers.’”

So what makes the temple a den of robbers? What makes prayers pointless—detested by God? (It’s not book shops in the foyer.)

God sends Jeremiah to the temple with a list of sins from which Israel must repent. The sin at the top of the list is, perhaps, surprising. It isn’t adultery or any sexual sin. It isn’t idolatry—not in a traditional sense. It isn’t related to religious practices.

So what about Jesus? He was mad about the merchants, wasn’t he?

The merchants were taking up space in the temple that was intended by God for foreigners. The rest of God’s temple was segregated by race and this was the only place foreigners could approach God to pray. Jesus was reclaiming what was stolen from foreigners.

Jesus, like Jeremiah, was concerned about oppression. We see this not only by who is driven out, but by who Christ calls in their place. The blind. The lame. The children. Christ makes room for the marginalized and the oppressed, and in they come.

The primary sins of those condemned by Jeremiah were financial. Even the pagan worship of idols (and the sexual sins committed as part of the ceremonies) were the result of Israel seeking financial blessing from false gods of prosperity and fertility—greed in religious guise.

The primary sin of those condemned by Christ was exclusion and oppression. They refused to make room for the foreigners in the land and to allow all people to approach God in the Temple as he designed.

What makes our prayers detestable is our actions outside of worship.

Prayer: The Call to Prayer
Bless the Lord, you angels of his, you mighty ones who do his bidding, and hearken to the voice of his word… — Psalm 103.20

Additional Reading
Read More about Radical Outreach to Outcasts
The characters Jesus holds up as examples of the types of people who would experience “the year of the Lord’s favor” represented everything his audience feared as “other.”

Readers’ Choice
In August we will look back at our readers’ favorite posts of the year. Submit a Readers Choice post
Tell us about a post and what it meant to you. What post made you think?