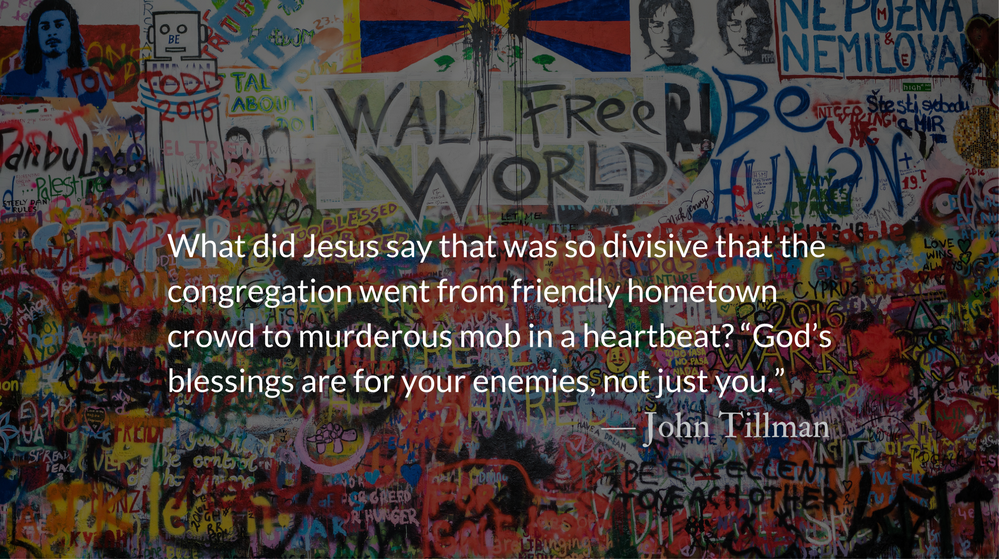 Scripture: Luke 4.25-28
“I assure you that there were many widows in Israel in Elijah’s time, when the sky was shut for three and a half years and there was a severe famine throughout the land. Yet Elijah was not sent to any of them, but to a widow in Zarephath in the region of Sidon. And there were many in Israel with leprosy in the time of Elisha the prophet, yet not one of them was cleansed—only Naaman the Syrian.” All the people in the synagogue were furious when they heard this.

The backlash that Jesus experienced in response to his Nazareth sermon was sudden and violent. One second they are talking about how well Jesus spoke, and the next they are shoving him toward a precipice, attempting to take his life.

What did Jesus say that was so divisive that the congregation went from friendly hometown crowd to murderous mob in a heartbeat? “God’s blessings are for your enemies, not just you.”

The characters Jesus holds up as examples of the types of people who would experience “the year of the Lord’s favor” represented everything his audience feared as “other.”

The widow of Zarephath was a foreigner, living in Sidon, one of Israel’s great enemies. Naaman the Syrian commander was even more controversial. He served the king who was oppressing Israel at the time he was healed. In today’s terms we would call Naaman a terrorist, a child-kidnapper, a human trafficker, and a war criminal. These are the kinds of outsiders that Christ celebrates as examples of who the Kingdom of God is available to, of who he will manifest himself to.

It is when we are the closest to Jesus that he will challenge us most directly. It is when we know him the best, like the Nazareth crowd, that he can surprise us the most. Everyone is pleased with Christ’s words when we agree with them. When he is blessing us, helping us, healing us, and promising us the kingdom, we listen affectionately. But if we listen long enough, Jesus will say something that makes us want to throw him off a cliff in anger.

Jesus chose to announce God’s kingdom in his backwater hometown that most young men would seek to expunge from their résumés. He chose to go out of his way to reach out to despised people—tax collectors, prostitutes, Samaritans, Roman Centurions, lepers, adulterers, foreigners. If we are to participate in Christ’s Epiphany, we must choose to manifest his same radical love and outreach to outcasts.

The Call to Prayer
Search for the Lord and his strength; continually seek his face. — Psalm 105.4