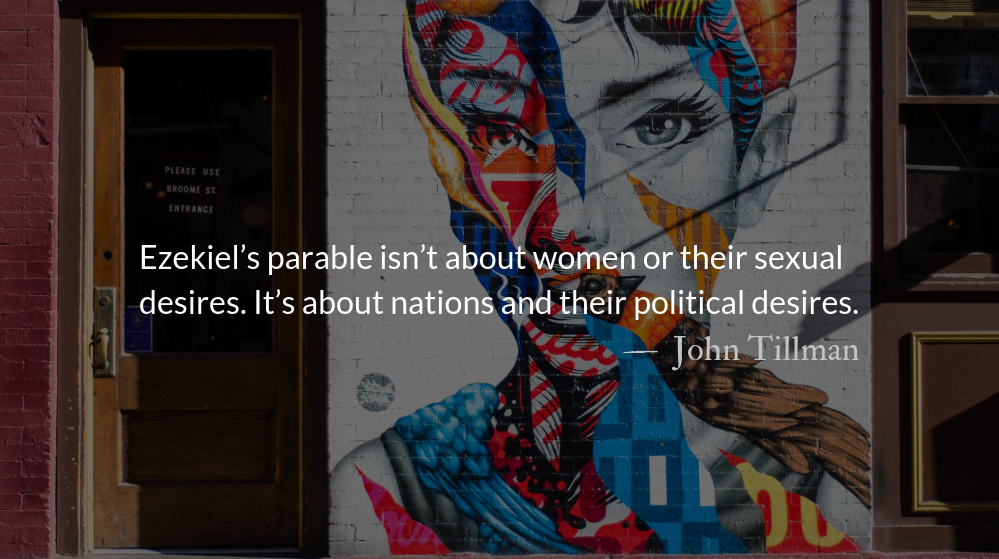 In Denial about Greed and Power

Ezekiel 23.4, 36-37
Oholah is Samaria, and Oholibah is Jerusalem…
The Lord said to me: “Son of man, will you judge Oholah and Oholibah? Then confront them with their detestable practices, for they have committed adultery and blood is on their hands.”

Reflection: In Denial about Greed and Power
By John Tillman

Today’s passages from Ezekiel are ones you’ll rarely, if ever, hear read out loud in church due to the flagrant sexual content.

It is some of the most lascivious-seeming writing of the Bible. Because of that, it is easy to forget that sex is not the topic. Our distraction (and discomfort) with sexual language and content in scripture can cause us to lose sight of the passages’ intended message.

In a similar manner, many have been taught from this passage in Ezekiel that the sexual acts described are sinful and offensive to God. It is true that God is concerned with sexual fidelity and condemns sexual sins. God also vehemently condemns sexual abuse and manipulation, which is metaphorically depicted as part of Israel’s slavery in Egypt.

It is the size of Egypt’s political and economic power God is analogizing when he refers to bizarrely sized body parts. It is the capabilities of Assyria and Babylon’s militaries that God is referring to in texts that sound like exaggerative, locker room style sexual jokes.

This offensive language is not an accident. Ezekiel’s purposely shocking parable is intended to connect the established shame of sexual sins to the sins Israel was unashamed of—greed and pursuit of power.

If there is anything that can still be shocking in today’s world, it is that we still don’t fully admit or understand the destructive nature of the sins of greed and power.

May we not flinch from the convicting vision of our naked lusts.
May we seek God’s grace and mercy, knowing what we deserve, letting go of what we lust for, and longing to be clothed in the righteousness of Christ.

Prayer: The Refrain for the Morning Lessons
My eyes are upon the faithful in the land, that they may dwell with me… — Psalm 101.6

Additional Reading
Read More about The Idol of Immorality, Impurity, and Greed
Paul reveals to us that what is truly at the root of sexual immorality, is exactly the same thing that is at the root of greed—selfishness. We worship this idol, by making an altar of our own bodies and sacrificing the bodies of others upon it.

Read More about In Denial in Exile
Israel was in denial about their exile. They thought they deserved to go back. They were God’s nation. They listened to false prophets of God, who taught that God would miraculously bless them with deliverance, wealth, and freedom. They confronted anyone who questioned this narrative as unpatriotic.