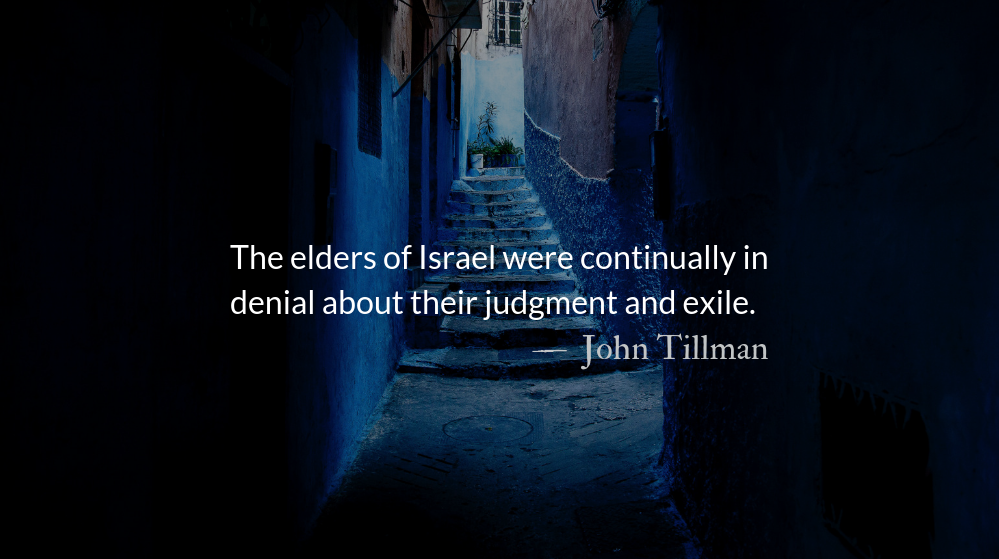 In Denial in Exile

Ezekiel 20.44
You will know that I am the Lord, when I deal with you for my name’s sake and not according to your evil ways and your corrupt practices.

Reflection: In Denial in Exile
By John Tillman

Israel thought it was God’s nation. They had a son of David on the throne. They had their founding documents. They had God’s Temple. They listened to false prophets of God, who taught that God would miraculously bless them with deliverance, wealth, and freedom. They confronted anyone who questioned this narrative as unpatriotic.

Much of Ezekiel’s ministry was attempting to convince the already exiled, that there was not going to be a miraculous return to Israel’s glory days in their lifetimes. Over and over in many ways, he tells them,
“No. The king won’t save you.”
“No. The city will fall.”
“No. God’s Temple will be destroyed.”
“No. You will never go back.”

Because to God, Israel had already ceased to be his people by breaking his covenant. They worshiped him in name only. Their true worship was to gods of financial blessing and prosperity, such as Ba’al. They profaned God’s name when they claimed to worship him.

We don’t have to deny our exile. We have to confess it. When we do, our redemption is certain because it relies on God, not us, being true to his name.

In these times we can cling to his promise that he will deal with us for his name’s sake and not according to our evil ways or corrupt practices. Then we will know and confess that he is the Lord.

Prayer: The Morning Psalm
Hallelujah! How good it is to sing praises to our god!
How pleasant it is to honor him with praise!
The Lord rebuilds Jerusalem; he gathers the exiles of Israel.
He heals the brokenhearted and binds up their wounds. — Psalm 147.1-3

Additional Reading
Read More about Lamenting Materialism :: A Guided Prayer
In ancient agrarian society if you worshiped a sun god or a fertility goddess or a god of weather or a god of bountiful harvest you were worshiping a god of financial success. Guaranteeing continually renewing cycles of growth was Ba’al’s main gig. Today, Ba’al wouldn’t be a rain god, he’d be Gordon Gekko.

Read More about Placing Trust in God
I decided early (Oh yeah.) to give my life to something eternal and absolute. (All right.) Not to these little gods that are here today and gone tomorrow, (Come on.) but to God who is the same yesterday, today, and forever. — Dr. Martin Luther King