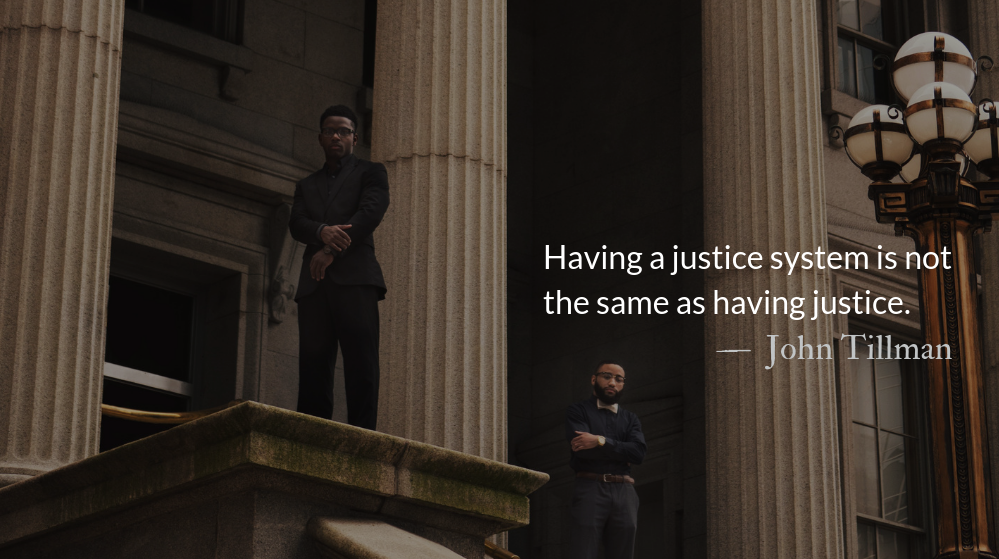 In Denial about Injustice

Ezekiel 22.29-30
The people of the land practice extortion and commit robbery; they oppress the poor and needy and mistreat the foreigner, denying them justice.
“I looked for someone among them who would build up the wall and stand before me in the gap on behalf of the land so I would not have to destroy it, but I found no one.”

Reflection: In Denial about Injustice
By John Tillman

The sins that brought God’s judgment and caused the exile of Israel were multi-faceted. But there is a common thread—injustice.

Having a justice system is not the same as having justice.

In Israel, as Ezekiel was prophesying, the Temple still stood. There was still a king on the throne and people still gave lip service to God’s law and sought the blessing of God in the Temple. The justice system was in place.

But God’s spirit looked wider than the narrow focus of political posturing, of religious rituals, of attendance of worship, of psalm singing, of sacrifices, and incense.

God’s spirit searched the city, through the forgotten alleyways and the corridors of power. He witnessed the criminality of the slums and of backroom political conspirators. And what he spoke of, more than anything else, was of its corruption, greed, and lust for power.

Over and over again, the prophetic words echo through Ezekiel, and all the prophets, with lists of financial sins. Sins of greed. Sins of exclusion. Sins of corruption. Sins of oppression. Sins against foreigners. Sins of denying justice.

In Israel, there was a nationwide, top to bottom, culture of injustice that subverted the purposes of God’s law and took advantage of—and often took the lives of—the city’s most vulnerable. In the Ezekiel passage God links the injustice of “bloodshed” to unjust financial practices.

God asks Ezekiel in our passage if he will “judge” the city. God seems to imply not the role of a priest or a legal figure, but more like the leadership role of judges before the failed line of kings. God tells him that if he would judge them, it is his responsibility to confront them with their injustices.

The Spirit of God is moving now, through our many nations, through our neighborhoods, beyond the naves and narthexes of our churches. He is moving as he did through the city of Jerusalem and the population of the exiled, looking for those who will stand in the gap for the oppressed, maligned, and neglected.

To judge our cities (to lead them) we cannot be in denial about injustice. To stand in the gap, we need to be prepared to stand up to the powerful on all sides, speaking out against all forms of injustice.

Denying the existence of injustice is not how to be a patriot. It is how to get exiled.

Additional Reading
Read More about Finding Faith in Injustice
We cannot miss the reality of our role in the injustice we long to see God destroy. We are co-conspirators in other people’s pain—our passivity, our lies, our sin are all part of the injustice of this world.

Read More about Liquid Wrath and Liquid Forgiveness :: Readers’ Choice
God’s liquid wrath flows from his love for the victims of injustice. It is fueled not by simplistic destructive retribution, but redemptive restoration.