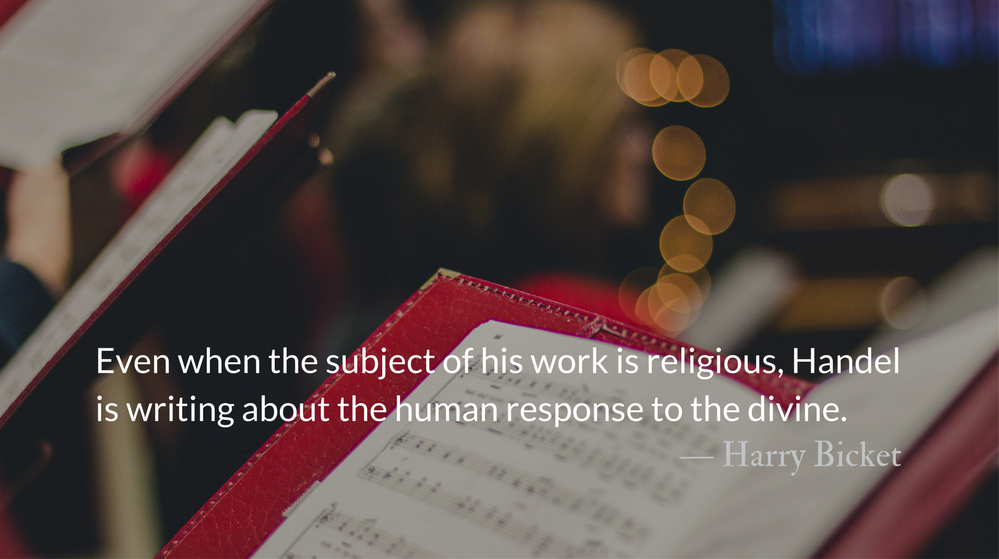 “Charles Jennens was a collaborator of Handel’s who struggled with depression following the suicide of his younger brother,” writes Mitch Davis who produced a documentary on Handel’s Messiah. Jennens’ brother was reportedly talked out of his faith at university and subsequently took his own life. “Jennens craved the spiritual solace he found in the exalted strains of Handel’s music and sought to combine that music with the scriptural words that comforted him during his depressive bouts.” Jennings composed the libretto of Messiah from translations of the Bible from the King James Version and The Book of Common Prayer.

Handel bounced from patron to patron throughout his career. Poor management of money and the resulting large shifts in his income, led him to become significantly indebted in London. Additionally, Handel’s first biographer John Mainwaring recorded that Handel, ”paid more attention to [food] than is becoming to any man.” Handel eventually became overweight, but was known far wider for English tabloid reports on his temper. In one argument he threatened to throw a soloist out a window, in another he escalated a verbal fight until a friend stabbed him with a sword (Handel was spared, as the sword was blunted by a metal button).

Mesmerized when he saw Jennens’ impassioned libretto, Handel worked feverishly on an oratorio, completing it in less than four weeks. Messiah was a turning point for Handel; its success freed him from his debts, and he became extraordinarily generous with the wealth his fame allowed. Something beyond material success seems to have happened as well. During the composition, Handel had what some call a spiritual epiphany. “I did think I did see all Heaven before me, and the great God himself.” Handel wrote as he composed the Hallelujah Chorus. “Whether I was in the body or out of my body when I wrote it, I know not.”

“Even when the subject of his work is religious, Handel is writing about the human response to the divine,” observes Harry Bicket, the director of The English Concert chamber orchestra. It’s clear both Jennens and Handel found personal grounding in Messiah and wanted to share that experience with others. Messiah seems to be both both men’s declaration that Christ is sufficient in the chaos of the world. They approached Messiah, as we can during this season as well, drawing solace and strength from the glory of Christ.

The Request for Presence
Gladden the soul of your servant, for to you, O Lord, I lift up my soul. — Psalm 86.4