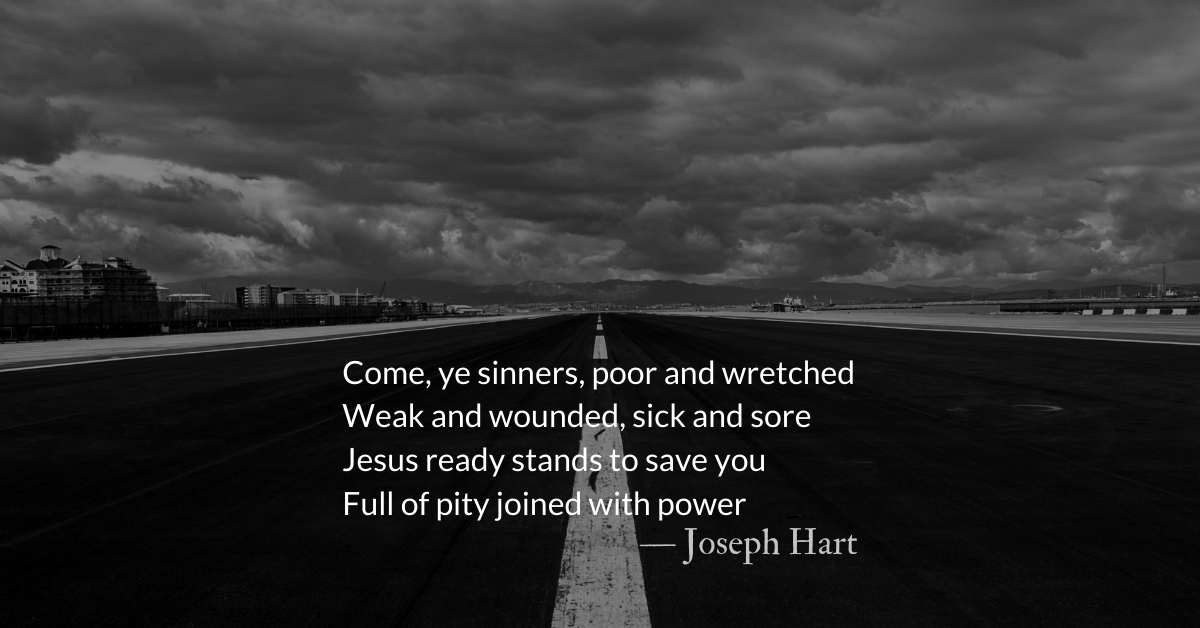 Scripture Focus: Luke 8:43-48
43 And a woman was there who had been subject to bleeding for twelve years, but no one could heal her. 44 She came up behind him and touched the edge of his cloak, and immediately her bleeding stopped.
45 “Who touched me?” Jesus asked.
When they all denied it, Peter said, “Master, the people are crowding and pressing against you.”
46 But Jesus said, “Someone touched me; I know that power has gone out from me.”
47 Then the woman, seeing that she could not go unnoticed, came trembling and fell at his feet. In the presence of all the people, she told why she had touched him and how she had been instantly healed. 48 Then he said to her, “Daughter, your faith has healed you. Go in peace.”

From John: Each Monday of Lent, Jon Polk will be bringing us a devotional highlighting a hymn appropriate to the Lenten season. For many of us, 2020-2021, with all that Covid has cost us, seems like one long year of Lent with no Easter in sight. We’ve had to give up so much and miss so much and suffer so long. And in the United States, especially, the season of Covid that we thought would be a few weeks has now stretched an entire year and is not ending anytime soon. I pray that in this season, these hymns and God’s Holy Spirit will bring each of you comfort, peace, and resurrection of what has been lost. Easter is coming.

In the introduction to his collection of hymns published in 1759, Joseph Hart honestly describes his experience of spiritual emptiness.

“I hastened to make myself a Christian by mere doctrine, disregarding the internal work of grace begun in my soul by the Holy Ghost. I ran such dangerous lengths both of carnal and spiritual wickedness, that I even outwent professed infidels, and shocked the irreligious and profane with my horrid blasphemies and monstrous impieties. For having obtained by Christ a liberty of sinning, I was resolved to make use of it; and thought the more I could sin without remorse, the greater hero I was in faith.”

Born in London in 1712 to particularly pious parents, Hart was raised, as he described, with “the sound doctrines of the Gospel from infancy.” However, upon reaching his twenties, he began to struggle with the destiny of his soul.

Hart forced himself deep into religious practices, such as fasting, prayer and virtue, only to encounter vain superficiality. He then turned headlong to selfish pursuits and vices, taverns and drinking companions, describing himself as a “loose backslider, an audacious apostate, a boldfaced rebel.”

The first verse of his most famous hymn, “Come Ye Sinners,” reads like his own autobiography.

Come, ye sinners, poor and wretched
Weak and wounded, sick and sore
Jesus ready stands to save you
Full of pity joined with power

What prompted Hart’s change of heart and recovery of the faith that had been nurtured in his childhood?

The power of Easter.

In his own words, “The week before Easter, 1757, I had such an amazing view of the agony of Christ in the garden, as I know not well how to describe. I was lost in wonder and adoration, and the impression it made was too deep.”

It is exceedingly easy for those of us who have been faithful Christians for a long while to experience spiritual amnesia, forgetting what it was like to identify with sinners and outcasts. We can develop a callous piety, a “holier-than-thou” attitude that prevents us from embracing our own continual need for a Savior, shielding us from the necessity of repentance.

The season of Lent purposefully reminds us that we are mere dust, that without the work of Christ and the grace of God, we are all sinners, poor and wretched.

In one of the original verses of the hymn not often found in modern hymnals, Hart beautifully sums up the significance of Christ’s sacrifice.

Divine Hours Prayer: The Greeting
Restore us, O God of hosts; show the light of your countenance, and we shall be saved. — Psalm 80.3

Read more from Jon Polk: The Slavery of Plenty
Although we may not recognize it, we are far too easily enslaved by our possessions, our comfortable way of life, or our status and authority.

Read more about Rumors or Repentance
The Jordan, where John baptized, is a river of decision. Will you cross over or not?  Will you repent? Will you enter the Kingdom of Heaven or not?