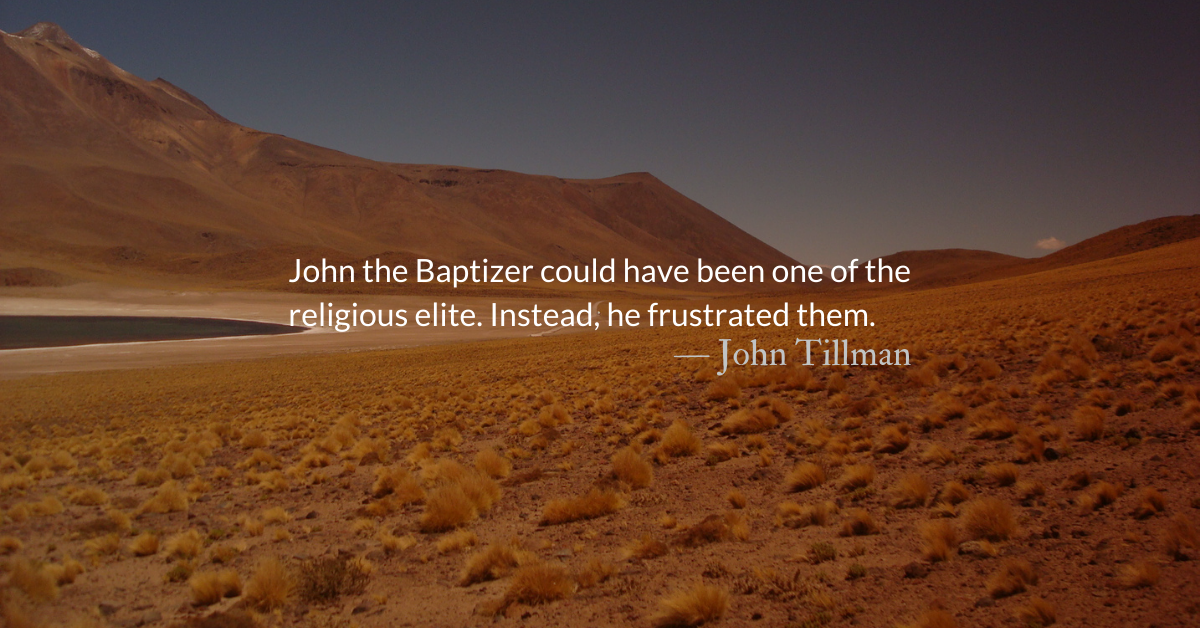 Scripture Focus: Matthew 11.14-19
15 Whoever has ears, let them hear.
16 “To what can I compare this generation? They are like children sitting in the marketplaces and calling out to others:
17 “ ‘We played the pipe for you,
and you did not dance;
we sang a dirge,
and you did not mourn.’
18 For John came neither eating nor drinking, and they say, ‘He has a demon.’ 19 The Son of Man came eating and drinking, and they say, ‘Here is a glutton and a drunkard, a friend of tax collectors and sinners.’ But wisdom is proved right by her deeds.”

In normal circumstances, John the Baptizer might have grown up to work in Jerusalem’s Temple like his father, Zechariah. He could have been one of the religious elite. Instead, he frustrated them.

Like Moses, living in the desert after rejecting a life of ease in Pharaoh’s house, (Hebrews 11.24-26) John’s life of aestheticism stands in contrast to the luxury many religious leaders enjoyed. (Mark 12.40; Luke 20.47)

So what do powerful figures do when a prophet is making them look bad? They lie about him.

Rather than deal with the truth that John brought to light, the religious leaders accused him of being demon-possessed. Make no mistake, they knew what demonic possession was like. They had exorcists of their own. (Matthew 12.26-28) They weren’t making this accusation in error. They were spreading a false rumor intended to mislead. They created a conspiracy to slander him.

Jesus addresses this directly. He mocks the conspiracy and replaces it with the truth saying that John is the greatest man to have ever lived. But those who enter the Kingdom of God through repentance will be even greater.

The Jordan, where John baptized, is a river of decision. Will you cross over or not?  Will you repent? Will you enter the Kingdom of Heaven or not?

How should you repent? Many asked John, “What should we do?” In his Q&A session (Luke 3.10-14) all of John’s examples have to do with money. He must have felt that the crowd that day had problems with greed. A few verses later, he condemns sexual sins by Herod.

When someone critiques you and calls you to repent, what will you do? Will you dismiss them with a rumor like the Pharisees, with violence like Herod, or will you listen to the Holy Spirit and repent.

May we open our ears and reject rumors and conspiracies.

Divine Hours Prayer: A Reading
It was at this time that Jesus came from Nazareth in Galilee and was baptized in the Jordan by John. And at once, as he was coming up out of the water, he saw the heavens torn apart and the Spirit, like a dove, descending on him, and a voice came from heaven, “You are my Son, the Beloved; my favor rests on you.” — Mark 1.9-11

Read more about Jesus with Axe and Fire
John the Baptist describes a Christ who stands ready with both axe and fire. May we ask him regularly to cut down our idols.

Read more about The Sword Versus The Cross
Jesus Saves. But there will be those who refuse to be saved by Jesus. They…want to be saved by other, less demanding things.