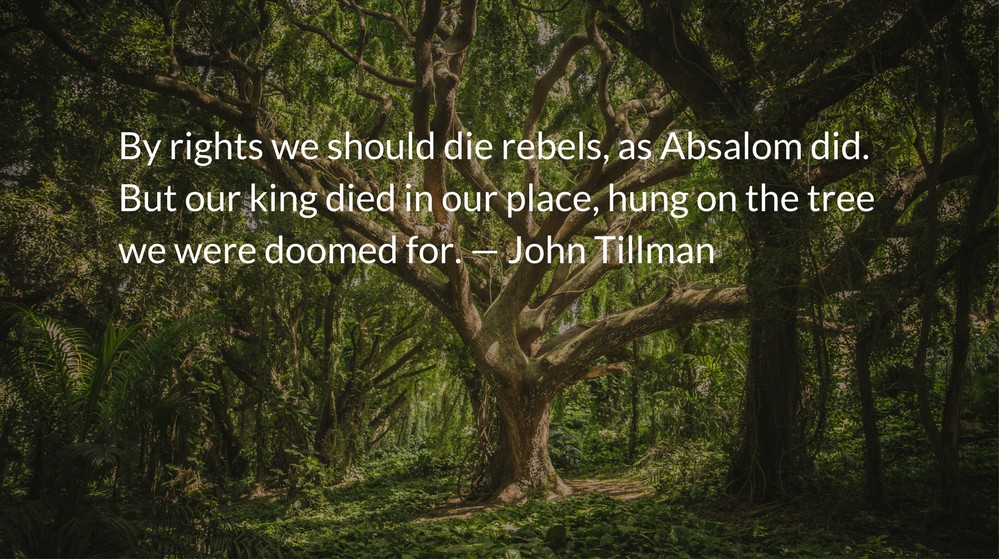 Scripture: 2 Samuel 14:14
Like water spilled on the ground, which cannot be recovered, so we must die. But that is not what God desires; rather, he devises ways so that a banished person does not remain banished from him.

Before long, it is clear that Absalom has not come home for reconciliation, but rebellion. Eventually it is Joab who, against David’s specific orders, murders Absalom, the hapless rebel, as he hangs in a tree, defenseless.

It is helpful for us to contrast David’s grudging approval for Absalom to return and Paul’s joyful and full acceptance of those involved in a conflict within the Corinthian church.

David allows Absalom’s return to the city, but not to community. He says of Absalom, “He must not see my face.” Yet Paul, speaks tenderly of relationships not only fully restored, but strengthened. “And his [Titus’s] affection for you is all the greater when he remembers that you were all obedient, receiving him with fear and trembling. I am glad I can have complete confidence in you.”

We are banished, sinful sons and daughters. But God, our king, was not theatrically cajoled into bringing us back. It was always his plan. Our king didn’t grant us partial forgiveness, keeping us from coming to his palace or being in his presence. He left his throne, his palace, and his privilege behind to come to us. By rights we should die rebels, as Absalom did. But our king died in our place, hung on the tree we were doomed for. Our king does not merely return the banished, but redeems them.

The message of the Gospel is not that we are grudgingly allowed back home but denied the privileges of family. Christ is not our parole officer, but our brother. Through him we become fully restored sons and daughters of his kingdom.

The Morning Psalm
…The Lord rebuilds Jerusalem; he gathers the exiles of Israel… — Psalm 147:2